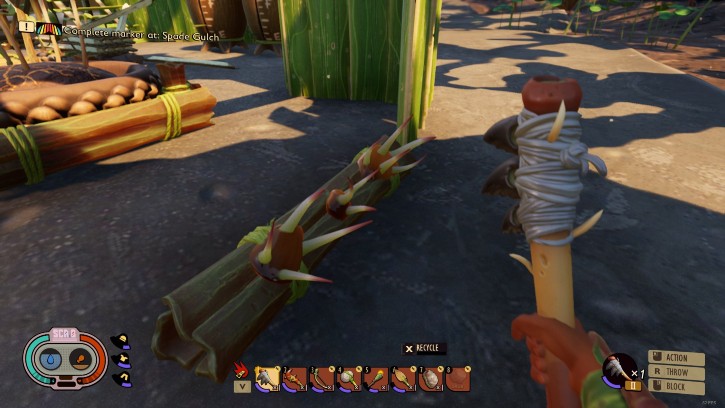 Traps are a fun and creative way of defending your base. It could also be a great method for killing bugs and insects if you have Entomophobia. It is also quite questionable if you are and you tried to play this game. However, this guide will help you learn more about base defense and how to make traps in Grounded.

How Do Traps Work

Traps are used to help you protect your base or just essentially be a tool to help you kill bugs effectively. They are crafted first and will become a blueprint when build unlike other tools and equipment which go directly to your inventory. This also means that you will have to set up the blueprint and have the available materials ready for the construction so it will not be up as quick as you would want it to be when you are out exploring.

There are three types of traps in the game. The first one is the Spike Strip. It is used to deter bugs and insects from entering through where it was set. When a bug or insect passes through the Spike Strip, they will take constant damage as long as they are standing on it.

You can also damage yourself by walking through this so be careful. You can easily jump over these to avoid damage.

The second trap in the game is the Lure Trap. It is used to lure insects and bugs to where the trap is set. If there are no insects and bugs in the surrounding area of the trap, there will be no insects or bugs that will get lured to it. So if you are in a base like near the pond to the north of the oak tree which rarely has any bugs and insects patrolling, it will be useless.

The third trap is called the Tripwire Bomb. This is harder to craft and will require tier 2 materials. It is much more potent trap in killing bugs and insects. If you decide to build near spiders, you would definitely want these along with proper weapon and armor to defend yourself.

How to Make Traps

Spike Trips will need 3 Weed Stems, 3 Thistle Needles, 1 Sap and 2 Woven Fibers. They easily acquired in the early game if you can search for the Weed Stems by chopping down Dandelions. You can also get them by chopping down Weed Plants which would require an Insect Axe.

Thistle Needle will be near the Rash site and you can get an unlimited amount of them if you ever find the big spiky looking plant you can chop. The Sap and Woven Fiber can be found in the early stages and should be in stashed at high amounts since they are also used for healing.

The Lure Trap requires 4 Flower Petals and 4 Sprigs to craft. They are a great way to farm for meat if you find a great spot to attract weak bugs and insects such as Weevils and Alphids. Flower Petals are found just across the huge wall near the oak tree to the north. You will either have to circle around or destroy the spider webs in the middle.

The next trap is called the Tripwire Bomb. It does exactly what the name implies and is quite difficult to craft. You will need 1 Spider Silk and 2 Ant parts. Ant parts can be hard to get if your base is located far north of the backyard. Spider Silk can be found in high amounts inside caves and tunnels but be prepared to take on multiple spiders along the way.

How to Set Traps

You would typically want these traps near your base if you are getting constantly attacked. There are base spots that are actually safe in the game but if you are in the middle of everything, you will most likely see a constant wave of attacks from ants and larvae. This is where the traps come in handy because they will think twice before entering your base that is filled with Spike Strips.

You can create also create a Lure Trap and build some Spike Strips around it where you would expect constant bugs and insects patrolling. This could be a steady source of resources that can help you resupply on weapons and armors.

Traps are easy to make and while the traps have numerous uses to be effective, you should always prioritize having gear that is meant for fighting such as the Acorn armor set or the Ladybug armor set.