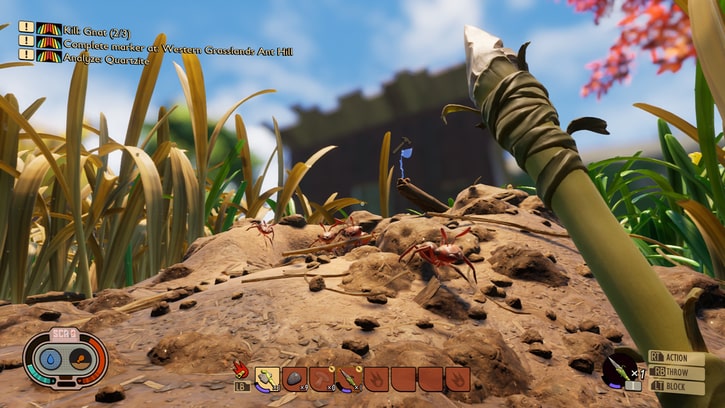 Have you noticed that some of your stuff is going missing within the game? No, you probably haven’t lost it on the way or dropped it somewhere by mistake. There is a little creature within Grounded that has surprised the community. Which? The ants. While they seem friendly at first, you will later start to notice that they are secretly stealing from your base while you are out and about in the garden.

So, today’s blog will be focused around the ants, and in particular, what you can do to protect yourself from the little thieves and protect all of the loot you have claimed.

The ants in Grounded are very smart, so, you shouldn’t underestimate their ability to climb high up to get what they are after. One of the main attractions and reasons for them to get close to your base is the food. After all, everyone must eat right?

One way to reduce the likelihood of ants coming to your base is to simply not keep food around in your chests as they will be the first to know if you do so. Trying to be smart and putting the food in chests that are high up where you think that they can’t reach it is also a bad idea as the community has reported that they have seen ants reach practically unreachable chests.

A long term solution? Perhaps not, but if you don’t want ants to come to your base and steal your loot, don’t give them the reason to.

Don’t Go Far Out for Too Long

It’s understandable that you sometimes need to go for a long grind for loot out in the garden which can take you away from your base for more than a few minutes, but one way to prevent ants from stealing is to simply stick around and regularly check up on your base and loot.

Users have reported that ants are never going to make an attempt at stealing anything if you are within close proximity of your base. Quite simply, the risk for them is too high as they also require some time to reach the loot and actually steal it.

So, next time you need to go further out for some loot, plan it out and make it quick. Sometimes, making two shorter trips to the same place is worth it as that can be just enough to stop the ants from getting hold of your items.

Spread Out Your Loot

Don’t put all of your eggs in one basket. Sounds familiar? Yeah, it’s a saying that is quite relevant in Grounded. If you want to minimize the damages cause by the ants, try and spread out your loot as much as you possibly could.

This way, only some of your items will get stolen in case your base gets attacked. Users have reported that this strategy works quite well, and while it’s not a long term solution, it is certainly better than coming to a completely empty chest which you grinded hours to fill up.

Catch Them in Action

Perhaps the sweetest and most satisfying experience in Grounded would be catching the thief in action. If you catch them in action, don’t be afraid to simply remind them who the owner of the base is and teach all of the bugs around you a lesson on why they shouldn’t step a foot in your home.

The best way to ensure that you catch them in action is to never stay away from your base for too long and give them the opportunity to do what they are best at.

We hope to have provided you with some effective temporary solutions to stopping ants from raiding your base and stealing the loot you have worked so hard to obtain. While there isn’t a go-to strategy that guarantees to keep the little thieves away, we will keep an eye out and be sure to update you if something ant-proof comes along.