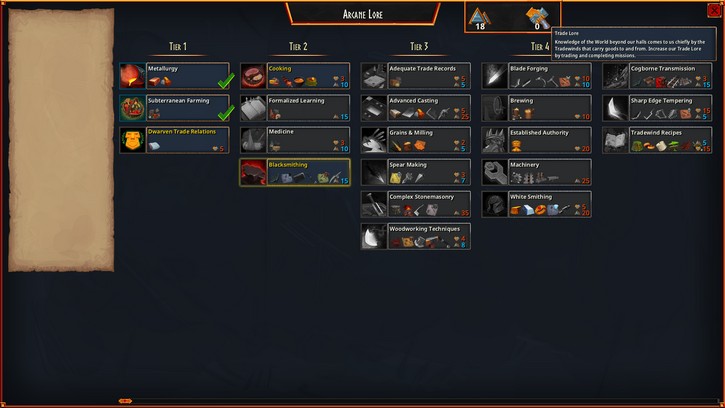 Trade Lore is one of the main currencies in researching tiers in Hammerting. They are quite limited because they are dependent on what shows up in the Overworld. This guide will teach you how to get Trade Lore and what to prioritize on research with them.

Quick Navigation show
What is Trade Lore?
How to Get Trade Lore
Finishing Delivery Quests
What to Research First
Conclusion

What is Trade Lore?

Trade Lore is a type of currency used to research specific fields to unlock new items and buildings in the Arcane Lore. They are one of the main ways of progressing in the game and you will only need a few to unlock most of the research tiers especially during the early stages of the game.

How to Get Trade Lore

To get Trade Lore, you will need to go to the Overworld to discover new quests that show up. You can access it by clicking the Great Entrance in the middle of your base or your spawn location. Actively look for quests that has a big exclamation point icon on them and click the corresponding village or area.

You will be able to see all the details required for the certain quest and if the only requires you to turn in some excess materials you have, these will be the delivery quest that will offer Trade Lore as a reward. Some of the quests that show up might require different things or resources and you can take a look at the rewards that are being offered upon completion of the quest to see if they will offer Trade Lores as a reward.

If there are none, you can keep organizing and work on your base first and check it regularly if new quests start to show up.

Most of the quests that are going to show up are easily accessible resources that you should have. A great tip is to always have a surplus of all the resources available unless you really need to use them.

This makes it highly efficient because once quests, especially delivery quests, show up in the Overworld, you can easily complete it immediately by pressing complete since it will already be on a “Ready for Delivery” mission status. This gives the game more time to produce new quests to show up once you have finished a quest.

Most of these rewards, especially the Trade Lores, are extremely valuable to your progression. You can also choose to pick the delivery quests you want to be completed if the resources you are trading are low on stock and the rewards are not that appealing to you at the given time.

Although Trade Lores are useful for progression, you should pay attention to the resources available near you because some are limited unless you explore further into the mine which is going to take a lot of time for you to access.

What to Research First

Prioritize maintenance over combat at the start when using your Trade Lores for research. After researching Dwarven Trade Relations, you will have more options to spend your limited Trade Lores on. Focus on Woodworking Techniques, Advanced Casting and Grains & Milling before researching combat tiers like Spear Making.

The faster you progress, the easier it is to focus more on your base and organize your production structures better. As long as you keep an eye out for enemies, they should be relatively easy to deal with at the start.

Getting Trade Lores are extremely dependent on the quests that show up in the Overworld. They are quite random so you will need to be thrifty on spending them especially in the later stages of the playthrough. You can prioritize what you want as long as it fits what kind of playstyle you want to play. After all, it is a management sim and you have all the freedom on what you want to unlock and experiment on first.