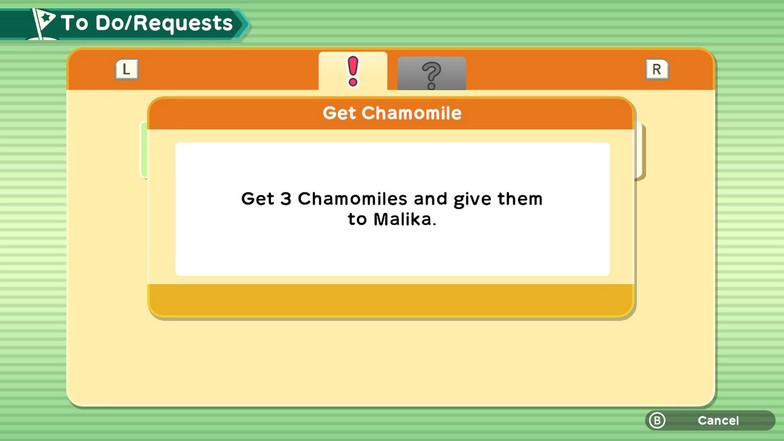 Why You Need Chamomile

As you progress further into the game, you will be encountering quests where you will need to give a specific kind of vegetable, flower, fruit, or any kind of resource available in the game.

When you reach the desert village of Pastilla, you will meet a woman named Malika. She will request 3 chamomile flowers for a certain main quest. This quest is needed to finish Pastilla’s questline and revive the harvest sprite.

The other reason you would need chamomile is to improve your relationship with Malika. She is a fan of collecting all kinds of flowers but chamomile, in particular, is her favorite. No wonder she asked for it randomly before even talking to you.

Where to Get Chamomile

This chamomile location is fixed and it will spawn almost daily in the town of Pastilla. It is extremely scarce as this is the only node I found while playing the game until the mountain ruins. On the bright side, I believe it spawns nearly at a 100% rate.

I did some testing and I found out that the other chamomile seed spawns at exactly 3 pm. So at around that time, you will be able to get 2 chamomile seeds per day. Another thing to note is that the first chamomile seed that spawns in the morning disappears sometime around noon. I literally saw two nodes of chamomile seed at the exact location and saw one disappear before I even got to it.

This spot is just above the town of Pastilla and directly above the house where you, Jamil, and Saeed had a feast. Keep an eye out for it at around 2-3 pm to be safe.

Every time you are in the town of Pastilla, it is exhausting because of the heat. Yup, literally. If you want to marry Malika in the future, make sure to memorize this spot and farm it daily. There are also some resources you should memorize in the area like roses since it will also be needed for the quest after and it is also used as a gift for Gabrielle.

Make sure you always have inventory space and bring a camel when farming in Pastilla. You can get one in Jamil’s house which is also the livestock dealer in Pastilla.