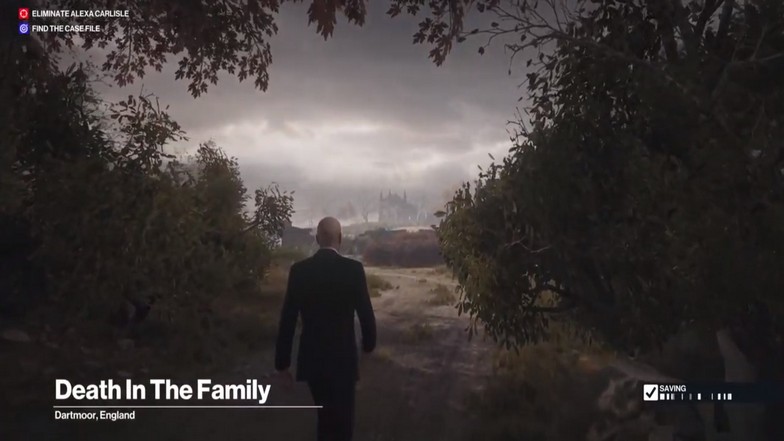 Death in the Family – Thornbridge Manor

In the mission brief, it is noted that Alexa Carlisle is aware of the possibility of an assassination attempt. Right at the start of the mission, as you head towards Thornbridge Manor, you will follow the private investigator discretely.

You can grab a weapon here like a kitchen knife if you want but continue investigating the room. Head to the bookshelves inside Zachary’s bedroom and interact with the book to open a secret passage. Grab the photocopy of the floorplans and get back to Mr. Fernsby and inform him of what you have found.

All information on each suspect encounter

Patrick Carlisle – had a hookup as an alibi; dislikes Zachary; thinks Zachary committed suicide or Mr. Fernsby took him out

Emma Carlisle – had a migraine and went to bed at 8 pm; dislikes Zachary for his personality and lifestyle; thinks Zachary committed suicide because Alexa Carlisle faked her death and he was going to be all alone

Rebecca Carlisle – says Patrick Carlisle disappeared after dinner and Gregory and Edward was drinking; had a conference meeting for her New York office at 9 pm and spent 3 hours in her room with her laptop; blames Emma as she was kind of awkward; claims Zachary came to her for help with hooking up a friend of his in the publishing business; saw Mr. Fernsby leave Zachary’s room in the afternoon and got startled when Rebecca saw her

Edward Carlisle – stayed at the local inn to drink with Gregory Carlisle; seemed like he is the only one empathetic towards the situation

Mr. Fernsby – alone at the office at Zachary’s time of death with no alibi

Inside Emma’s room, you will find a letter that says that Emma is an illegitimate child of Alexa’s late older brother, Montgomery. The mother also claims that Alexa and Zachary murdered Montgomery.

Rebecca is confirmed that she was in a conference call from 9 pm to midnight on the day Zachary died. This is found when you enter her room and investigate Rebecca Carlisle’s laptop. Also, one of the staff maids said that she slept with Patrick Carlisle.

Inside Mr. Fernsby’s office, you will find Zachary’s diary that Zachary and Alexa murdered their older brother Montgomery 46 years ago with the help of Mr. Fernsby covering the murder and made it look like an accident. Zachary wanted to confess everything. The suicide note did not match Zachary’s handwriting from his diary.

After all the investigating, go outside the manor and look for the photographer near the fountain. You will be prompted to take the disguise of the photographer as Madam Carlisle wants to have a shoot. You can also go inside the greenhouse for more information.

The greenhouse will show the lethal dosages for the poison that was used to kill Zachary. On another note, you will find another clue that shows more personal measurements of another person which are “female, age 65-79, 60-64 kilograms”. This evidence shows that Madam Carlisle is the next one that is going to be murdered. These pieces of evidence collected lead to Emma Carlisle being the murderer.

Once you get the photographer’s disguise, you can alert the staff near the fountain that you are ready for the photoshoot and the family will all gather around the fountain. After taking the photo for the Carlisle family, wait for every to disperse and grab your private investigator disguise and wear it again.

Head back to the lobby where there seems to be a family meeting. Follow the next objective and this will lead you to eavesdrop on one of the staff outside Thornbridge Manor. You will learn that Madam Carlisle still wants to proceed with her staged funeral tomorrow and she wants to have all the arrangements inspected.

Get rid of the birds and take care of the undertaker to steal his disguise. Madam Carlisle will be called to the funeral and your next objective will be to go to Mr. Fernsby and say that you have your conclusion for the investigation. Mr. Fernsby will direct you back to Alexa Carlisle’s office and you will have to wait for her inside.

Accuse Emma and tell her all the information you have. Once you do, she will reward you with the case file on Arthur Edwards even though she knows that you were there to kill her. She will open the secret safe where the case file is located and she will exit her office and go to the balcony.

Grab the case file on Arthur Edwards and go to the balcony to eliminate Alexa Carlisle. Silently dispose of her with your knife and drag her body somewhere not in the open just in case. Freely locate the exit afterward to finish the “Death in the Family” mission.

There might be a different outcome depending on your chosen dialogue when you talk to Alexa Carlisle. I would assume that you will have to deal with her and her guards if you mess up the information as mentioned earlier, Alexa Carlisle knows that someone was sent to go after her. The same goes for the first mission “On Top of the World” where if you wait a little longer, the lockdown will get stopped forcing guards to enter the penthouse room.

The beauty of Hitman 3’s missions is there are always different ways you can play around them. Just at the start alone, you can talk to Mr. Fernsby to conclude the investigation even without interrogating the suspects. You can also gather all the clues yourself and sneak into the window of each of the suspect’s rooms as there are more pieces of evidence there. The hard challenge here is getting the photographer’s disguise as the garden is littered with Alexa Carlisle’s guards.