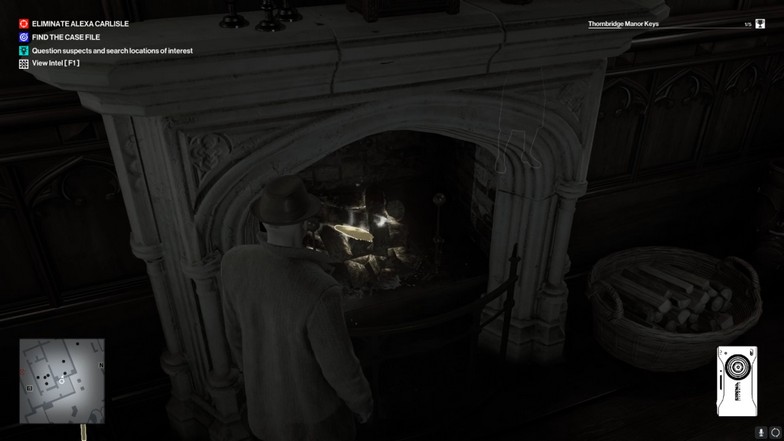 Opening Mr. Fernsby’s office might be confusing because the game does not tell you what to do or how to open it even when the objective markers are pointed out on any difficulty other than master difficulty. This puzzle takes place on the “Death in the Family” mission which is the second one in the Hitman 3 campaign story. This guide will show you specifically how to open Mr. Fernsby’s office in Hitman 3.

You can choose whatever order you want in confirming and investigating more pieces of evidence to find the suspect. The only two things you cannot investigate is the greenhouse and Mr. Fernsby’s office because they are somehow locked with literally no entry points except through the main door.

It is not pointed out but you have to use a crowbar to open and I even tried throwing things to the door and breaking the glass to open it but it never worked. You are not looking for a key as well because I checked all around Thornbridge Manor looking for them but the only solution was getting the crowbar.

The crowbar is located behind the greenhouse outside Thornbridge Manor. It is right on top of the table near the gardeners talking. You can easily take it with the staff looking but if you did something suspicious before, you will need to be discrete as they will be looking out for you.

Once you grab the crowbar, you can go to the greenhouse and open that one first with the crowbar. Be careful when you are breaking down the door as it will alert all nearby staff members to become suspicious of you.

After opening the greenhouse door, you can investigate the evidences immediately and if you picked up the wrench near the fountain, you can use it to repair the equipment made to make the poison and make one yourself. You will have to get the poison bottle in the kitchen with the staff members to produce one but this one is completely optional.

Now that you have the crowbar to open locked doors, you can go back inside Thornbridge Manor and head straight to Mr. Fernsby’s office. If you are lost, just go back to the main entrance of Thornbridge Manor and turn right to the hallway. This is where you probably got the private investigator’s disguise. Mr. Fernsby’s office is just near the window at the end of the hallway near the entrance.

Open the door with the crowbar and sometimes some might get confused and use the crowbar on the fuse box beside it but it is just a distraction that might catch you off guard. Once the door is open, you can safely enter Mr. Fernsby’s office as there is no staff personnel patrolling this area.

You can grab the master key and probably one of the most important piece of evidence in solving the murder mystery.

The guide is pretty clear cut and I am also curious to know if you can skip every line of questioning and head straight for the crowbar to unlock the greenhouse and Mr. Fernsby’s office.

After interrogating Emma Carlisle, going through her room, and investigating Zachary’s room, it seems conclusive that she might be the suspect already. Although she shares a room, you might have to interrogate her roommate as well. Hitman 3 just keeps you thinking and it is absolutely amazing.