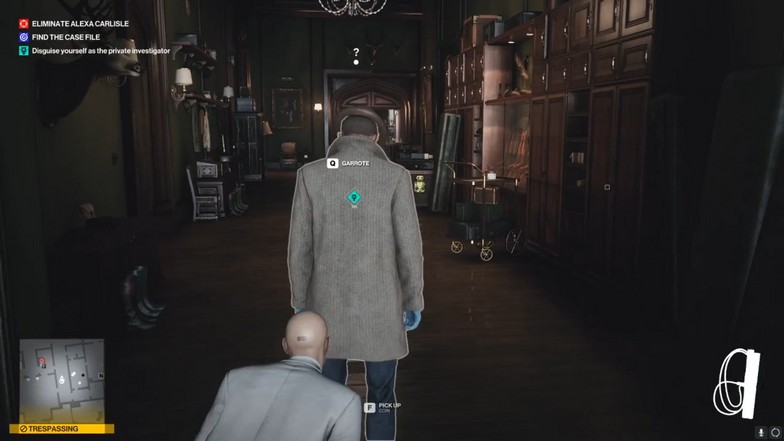 Just like in previous Hitman 3 games, the mechanics are all the same but it takes a while for people to learn when you are just getting to play the Hitman franchise for the first time.

Subduing enemies means that you will knock them out unconsciously instead of eliminating them but both are viable options if you are not into trophies and challenges because as a hitman, you only want to eliminate specific targets indicated on your objectives or mission brief. This guide will teach you how to subdue enemies in Hitman 3.

Unequipping Weapons or Holstering Your Weapons

To have the option to subdue a civilian or even an enemy, you will need to holster your weapon if you have it equipped. You have to press “H” on the keyboard depending on which platform you are playing on. This is easily accessible in the options menu to find out which button or keybind to press.

Once you have holstered your weapon, you can sneak to civilians and enemies and have the option to subdue them. The right button will show up so do not worry about knowing which button to press as it is easily seen. For unequipping weapons, you can easily swap back to your camera or anything non-lethal like the distraction coins and it will open up the subdue option.

If you have an unholstered weapon, it will be a brutal assassination on the target which is up to the player if they want to roll like this.

Disposing of the Body

Whenever you are doing this, you have to make sure that you have a way to hide their bodies undetected. These are lockers, cabinets, crates, and boxes to hide these bodies but there are more options like just dumping them through the ledge which is an amazing feature for Hitman games but this can be punishable if you are not aware of the location.

Random people can easily spot it if they are near the dump location and it is extremely dangerous as everyone will be alerted which makes sneaking around much harder.

At the start of every mission, you are free to re-plan your mission and choose different items depending on the items you have unlocked while playing the game. You can have more melee weapons or more distraction items.

For melee weapons, this is an easier way to dispose of targets without causing any noise or commotion in the area. The earliest weapon you have is the fiber wire and you will have the option to garrote a target instead of subduing them. The example on the video above is purely for visual aid because that was not a target I needed to eliminate in the “Death in the Family” mission.

In other cases such as the “Apex Predator” mission, you need to dispose of two targets near each other which can be a struggle without alerting the other. Melee weapons are the best choice for this and some are even throwable if the opportunity comes up for a split-second that no one is looking at the other.

But obviously, you have to be careful about the dead body if you are throwing weapons at them to eliminate them. If you have no way to dispose of the body without alerting, it is better to wait for a better opportunity. If you have literally only two targets with no civilians inside, you can have two throwable weapons and just eliminate the swiftly together with throwables.

Just to point out that either subduing or eliminating a target will still let you steal their disguise. As some might assume that eliminating a target may expose the disguise you can steal but it does not. Once you switch disguises, your previous outfit will be left on the floor which you can change to again at the same location.

This will not cause patrolling NPCs to be alerted once they see the disguise on the floor so just keep disposing of the body.

When you are caught by any patrolling guards that are not mission targets (depending on specific missions), you can lead them to an empty place or room and you will have the option to fake surrender when the notification pops up. The button depends on the platform your playing on but the right button or keybind pops up immediately when it is possible.

The button notification rarely pops out so you can check your controls or keybinds to check which is the melee button and just go near them and press it. As long as there are no witnesses near, you are perfectly safe. However, if you are already compromised, they will shoot at you without discretion so be careful.

Whenever there are certain scenarios or situations you are not familiar with, you can save right before them so you can rinse and repeat. There are still many tricks to learn from playing Hitman 3 and there are over 50+ challenges for every mission to keep you preoccupied with the lack of missions in the game.

Nevertheless, the game has great combat previously seen in Hitman games and the lack of new missions for veterans is still well compensated for with transferrable progress from the previous Hitman games.