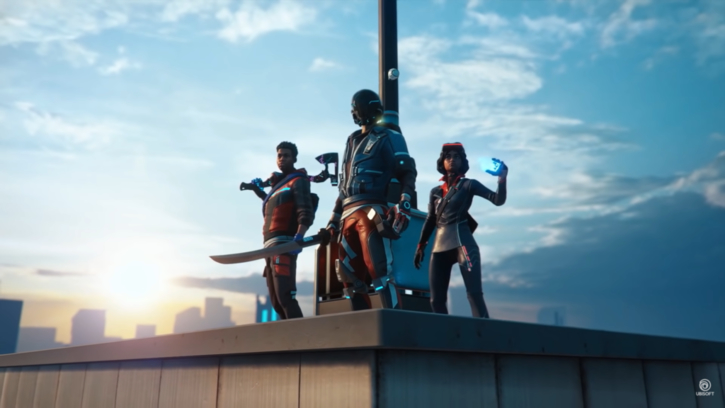 Hyperscape is Ubisoft’s official entry into the highly coveted battle royale game mode. It is a futuristic shooter set in the 2050’s carrying host of attractive additions to the already popular format. With a focus on futuristic combat, weapons and abilities; this game offers fans of the genre something different.

The makers of Rainbow Siege 6 and Assassins Creed have designed a beautiful game world which is expansive and stays true to the genre by maintaining arena style combat. With the focus being on futuristic gameplay, Hyperscape has a very turned-down gravity setting and no fall-damage. This offers the possibility for highly engaging vertical axis combat too.

Along with this, the game offers the players two ‘hack’ abilities and a roster of futuristic weapons to choose from. Ubisoft has made the bold decision to limit the number of weapons in exchange for high variability with each weapon they offer.

Quick Navigation show
What does Weapon Fusion Do?
How to Fuse Weapons Together in Hyper Scape
What Are the Benefits of Fusing Weapons on Hyper Scape?
Key Takeaways

What does Weapon Fusion Do?

The introduction of weapon ‘fusion’ in Hyperscape gives the players a chance to upgrade guns in-game which gives the weapons increased clip size, damage range and build. Once a weapon is picked up, it can be fused 4 times, giving the weapon three transitional stages till it reaches its full potential.

Like any battle royale game, you pick up weapons and later find additional enhancements light scope and silencers. However, in Hyperscape the weapons you pick up are usually in stage one of their evolution. They offer basic damage dealt, fire rate etc. Each player carries two weapons and even though there are only 9 weapons, they perform a range of functions. So it is crucial to stick to your favorite weapons and ‘fuse’ them to unlock their destructive potential.

Let’s take a close look at the Ripper, the primary assault rifle in the game and see how fusion affects it to better understand this feature.

The Ripper in its original form comes with a 23-bullet magazine dealing 11 HP body damage and 16 HP headshot damage (yes headshots are under powered and hard-to-land because of the focus on in-game movement). With each of the next three fusions, the damage dealt to the body and head remains the same but the magazine size goes to 23, 28 and 30 respectively.

The big jump in damage comes with the fourth and final fusion fusion. This is true for most weapons in this game except the Protocol V – primary sniper and the two pistols. In the case of the Ripper, the body damage dealt jumps to 16 HP and the headshot damage climbs to 19 HP per shot.

Each player has 120 HP, which makes 1 V 1 duels very competitive but also getting that final fusion crucial to victory. The first few minutes in the game are spent on looking for these fusion possibilities, unless you bump into an enemy.

How to Fuse Weapons Together in Hyper Scape

Once you choose your weapon for a game, you are tasked with finding the same weapon across the map 4 more times. Picking up a copy causes the two to fuse together and become a better version of the original gun.

This straightforward loot system means that knowing about each weapon and their function in the game is important. Unlike other battle royales, you can’t just drop a weapon and pick up a new one because the fusion upgrades you enforced will be lost. You’ll have to start afresh with the new weapon at it’s base state, so choose wisely.

What Are the Benefits of Fusing Weapons on Hyper Scape?

There is a race to fuse weapons and max out their abilities because this gives you a huge advantage. But this also gives you a chance to rake in kills. Fuse your weapons faster and you have more chances to pick up stragglers looking for upgrades during the first few minutes.

Also, in weapons like the Komodo and Hexfire and Salvo EPL, upgrades not only increase fire rate or damage, but improve their functionality. Grenade launchers and the Hexfire (Gatling gun) get improvements in damage range and ease-to-control as well. These weapons are genuine game changers and are considered overpowered in this game because a lot of the focus is on movement.

Traditional accuracy, crouch and fire, jiggle peeks and strafing will be very minimal. The jump pads and lack of fall damage make movement a crucial part of the game. Players hop around from rooftop to rooftop and on giant jump pads that propel them above most opponents. From these long ranges combined with erratic opponent movement, an upgraded grenade launcher or a high magazine capacity gatling gun can be very effective.

So, we suggest that you try and find 5 of the same weapon to get that maximum fusion. This strategy will ensure that you dominate games in Hyperscape.