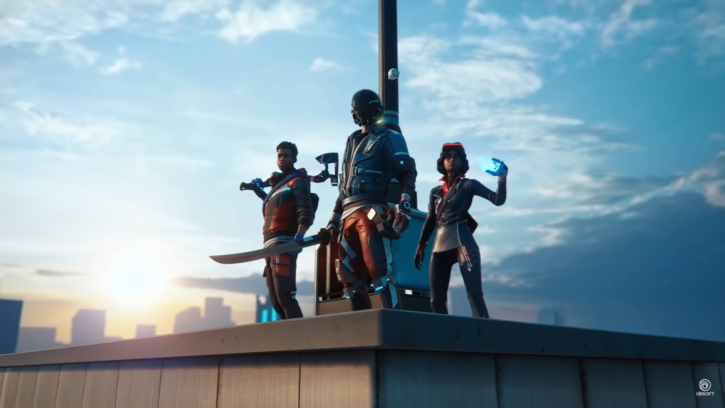 Ubisoft’s latest is a highly futuristic battle royale game set in the 2050’s. The game is a mixture of style and high-octane combat packaged with all-new weaponry and hack for players. You capture a golden crown and hold it for 45 seconds to secure the win. But on the way to the crown, you face a lot of intense gun battles set in a low gravity environment filled with revamped movement never seen before in this genre.

The game has been designed to place great significance on visuals and game environment. Even the Echo ability (where you come back as a hologram when you die) is visually different from the normal game environment.

The hacks look spectacular too. Imagine rolling up into a metal ball and bouncing around skyscrapers or building 2 storey high holographic walls and stacking them as high as you want. All the features and abilities in the game look incredible.

The weapons too are designed beautifully. They resemble weapons of current FPS games but have functions like auto-aim that make them futuristic. You might expect games like this to be very graphic heavy. Also, you’d expect these games with rich detail to put a strain on your internet connection when you play online.

But, Ubisoft has designed the game in a way that is easily accessible across most modern PC’s and provided robust servers which negate a lot of the ping. Some gamers still experience some lag while playing the game online. This could be due to a variety of factors which we will analyze in this post and try to guide you through methods that could negate them and give you a better online gaming performance.

One of the main reasons for lag in Hyper Scape online gameplay reported is due to a system that needs updates. When new updates are rolled out, the old versions usually become very unstable and clunky. This translates to online gameplay too. The blue question mark on the right side of your taskbar usually indicates that driver or software updates might be available. Try and make updates regularly or make them automatic to avoid problems.

Graphic drivers, which are crucial to smooth gameplay, require regular updates. Failing to follow through might lead to poor performance in-game, frame tearing, lag or an overheating issue while running the game. So keep drivers updated too.

Another issue could be apps running simultaneously when you are in game. This could mean Google Chrome or Skype or any other app that constantly accesses the internet. This instantaneously causes a spike in the ping and reduces the quality of the in-game experience.

Make sure you reduce the number of start up apps on your computer. These are just the apps that start automatically when you turn your PC on. This makes your PC slower to boot and decreases its performance on the whole. Go to your control panel –  apps – start up apps and try to figure out how many apps have an auto-start at boot option. Cut back on those and this will increase the overall speed of your PC and reduce the lag in Hyper Scape.

There is always a possibility to better your internet connection,provided that you are prepared to spend a little bit more. But this small change makes a huge difference in onlinegamplay. It gives you a better frame rate and you don’t have to worry about your screen freezing only to find your in-game character dead with opponents spraying bullets at you.

Sometimes the firewall or antivirus application on your PC can interfere with programs that require the internet. They can block or hamper an applications ability to access the web and reduce your game performance or prevent it from establishing a connection. If you are unable to start a game or a dialog box opens asking if the application can access the internet, you might want to set Hyper Scape as an exception on your antivirus program.

To perform this press Ctrl + Alt + Delete keys.This will open the task manager. Here Click network and find Hyper Scape. Right Click and select Set as High Priority. This will give the game access to faster speeds on the same connection. This is done by giving Hyper Scape functions and internet usage higher allowance and reducing the speed of apps that run in the background while the game is running.