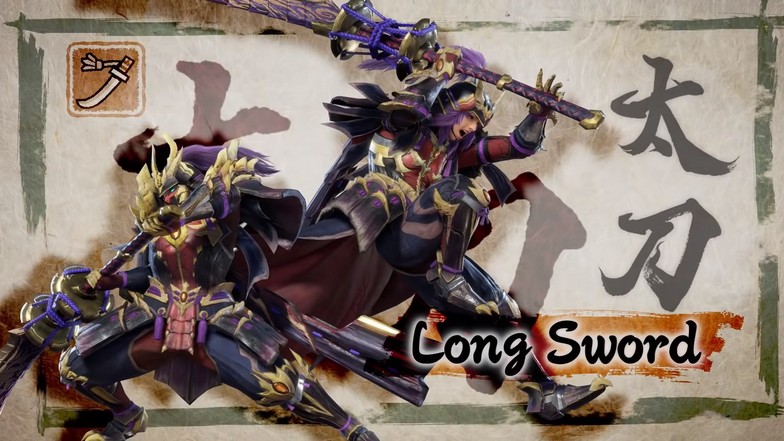 The Long Sword is a purely offensive weapon. It has high damage output with an average attack speed. It relies on doing counters as its form of defense and it one of the hardest weapons to master. It requires you to know the monster’s behavior and which counter to execute at the perfect time.

Speedrunners actually used this weapon in beating Magnamalo in under 7 minutes during the demo. Magnamalo was overtuned and they still manage to beat it without any weapon customization. This best Long Sword weapon guide in Monster Hunter Rise will teach you all about the controls, builds, combos, and everything else involving the weapon.

Will be updated thoroughly on release*

Long Sword builds rely on mixing high elemental damage and raw stats. While the Spirit Helm Breaker does multiple hits, you will not be that consistent in doing this often because it requires Spirit Gauge levels. With a highly offensive playstyle that does counterplay for defense, it makes sense to just go overboard on increasing your raw damage output.

For the Long Sword, it is reliant on counters and doing absurd amounts of damage. It is not that slow but it is a purely offensive weapon type so it can be hard to master.

The Long Sword not only relies on countering but also the use of the Spirit Gauge to deal damage. You have to land hits to fill it up and once it reaches the max level, you can perform devastating Spirit Blade attacks. You can see the Spirit Gauge below the health bar.

The Spirit Gauge has 3 levels. It can glow white, yellow, and red. Respectively, each color signifies what Spirit Gauge level you are in. The higher the gauge’s level, the higher your attack power.

The Foresight Slash is the main counter skill used on the Long Sword. You can activate it by pressing ZR + A together anytime during a combo. It gives you a long invulnerability window so it is better to use it earlier if you are expecting an attack from the enemy.

Once you dodge, you can press ZR to chain it into a Spirit Roundslash. Executing the Foresight Slash with a counter uses all your Spirit Gauge. You cannot use this if your Spirit Gauge is empty so if you try to counter or dodge with this ability without any Spirit, you will get hit.

After using an attack, you can press ZR + B together to perform the Special Sheathe. When you enter this stance, you get two options. Pressing X will use the Iai Slash. Pressing ZR will perform the Iai Spirit Slash.

The Iai Spirit Slash is the parry or counter here so if you are expecting an attack, you can use Iai Spirit Slash for a big counter. It consumes one level of the Spirit Gauge but executing this will help you recover it back immediately.

Iai Slash is used in canceling the Special Sheathe and just performs a normal attack. It can be a little dangerous as you slowly recover after using this attack since it lunges you forward. You can choose to wait to get back to the Quick Sheathe if the situation calls for it.

For the combos, the basic combo of A + A + A + A is easily spammable and is the fastest combo for the Long Sword. They basically just quick stabs instead of slashes to boost the Spirit Gauge. While they are quick, it is easier to perform the Special Sheathe and Foresight Slash with this basic combo. For the other basic combo mentioned, it is a bit slower but does more damage than doing the thurst combo of spamming A.

Since it the only combo available, you need to master when to use the Spirit Gauge because most of the other combos require them. If you miss, that is a big DPS loss and you will have to replenish your Spirit Gauge back up.

The Spirit Blade combo might be the most efficient one and it is easy to remember because you just spam the ZR button 4 times. Every time you see your Spirit Gauge maxed out and the monster is knocked down or trapped, you can use this combo every single time to do maximum damage.

If you want to use thrusts or spamming the A button, you can use the Foresight Slash or Special Sheathe in between the thrusts. It is best to use that combo to chip more damage in if the monster is going to attack and you have just a second to react. Countering might be reactive but in Monster Hunter Rise, you have to be more proactive and learn the monsters to execute more counters.

For most Silkbind attacks, it is used by combining ZL + X and is only different for ranged weapons. There will be more Silkbind attacks as there are usually 6 for each weapon. You have to take note that it requires a Wirebug charge to perform a Silkbind attack. That means you are sacrificing a little mobility every time you use it in combat.

The Soaring Kick Silkbind attack launches you in the air for a jump kick. If it hits, it will trigger a Plunging Thrust on the monster and it fills your Spirit Gauge up for 20 seconds. You can press ZR after landing the jump kick so it triggers the Spirit Helm Breaker in exchange for one level of the Spirit Gauge. The Spirit Helm Breaker is the Long Sword’s strongest burst attack so it is best to utilize it often when your Spirit Level is maxed out.

Serene Pose Silkbind attack is the most cost-efficient counter since it only uses up a Wirebug charge. It is activated by pressing ZL + A together. If you time this just before an attack, you will immediately counter without pressing any other button. However, this consumes two charges of the Wirebug charge so use it wisely.

Tips and Tricks for Long Sword

Using the Iai Slash to counter makes you a little more vulnerable than Foresight Slash. The benefits from using the Iai Slash is that it does not consume your Spirit Level. However, missing the counter will make you vulnerable for a second after the slash which makes it dangerous.

Since the Long Sword combos are not that fast, it gives you time to think if you need to counter or just keep going with your current combo. To become better at countering, you should keep in mind that you can delay each attack in a combo for a second. It gives you that extra time to think of what will the monster do next and perform a counter between your combo to execute it more efficiently.

If you plan on playing the Long Sword weapon as your main, you need to brush up on your counters because it requires precise timing. It will take a while to get used to it especially if you are going to try it for the first time in Monster Hunter Rise.

It is not a beginner weapon but it is one of the strongest weapons. You can practice the Long Sword on weak monsters. If you already know how to beat Kulu-Ya-Ku and how to beat the Great Wroggi, you can practice counters there along with the Silkbind skills.

It is still strong if you play with your friends but it is harder to understand the monster’s behavior when there are multiple targets available to it. So it is an entirely different playstyle when you play solo or playing with others.