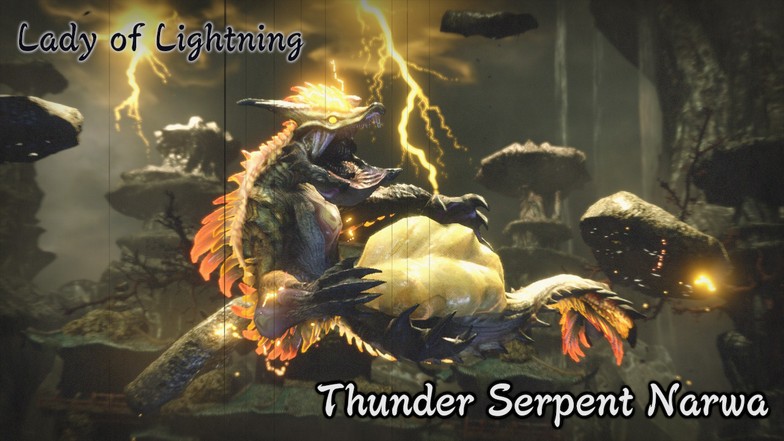 Thunder Serpent Narwa is unlocked by finishing an urgent quest and will be available after completing the 7-star Hub quests. It is not available on the village side so you will have to shift to doing Hub quests if you were playing solo on village which is basically the easy mode of the game.

Regarding his chest, wingarm, and abdomen, they will glow during the fight and you will see very clearly that these parts are infused with thunder during specific times. These parts will all be weak to attacks and in most situations that these parts are wide open, they are the only parts you can hit anyway.

How to Fight Thunder Serpent Narwa

This section will explain each aspect of the fight as there are many things to look out for.

Use the Cannons, Ballistas, and Machine Cannons when available

They have a limited amount of ammo too. Most of the time, you will not be able to use all of this ammo anyway as the platform disappears after around 10 seconds. Use this every time they spawn because Thunder Serpent Narwa always floats in the air unless knocked down. You can still hit the tail but it will be hard to capitalize on this if you are a melee weapon user.

This will be your main way of getting a knockdown on the boss because you will be able to freely shoot Thunder Serpent Narwa’s weak points by aiming with the defenses. Remember to use guard (R) if you see an incoming attack. Getting hit while mounted on the defense will be a huge opportunity loss because you will get knocked down and lose the chance to unload on it.

Most of its attacks are ranged attacks with either a huge radius that can cover most of the battlefield or a piercing beam-like attack like the one in the photo. When you see the purple beam attack, you will have two choices and it depends on your position. If you are close to Thunder Serpent Narwa, stick to him and freely hit him with your combos. However, if you are not even close to the boss, move as far as you can and focus on dodging the purple beams.

Thunder Serpent Narwa also has an attack where it starts shooting hypnotic-like thunder rings. There are around 3 variations of this attack and two of these are extremely easy to dodge. They move really slow and if you are far enough, it will be a piece of cake. The next one requires good reflexes. It will spread a circular ring around itself and spread across the whole battlefield.

The only way to dodge it is by using a Wirebug up. You can dodge roll this but you will need to increase your evade invulnerability window from armor sets if you are not used to dodging eye frames.

For the next attack, it will breathe a purple beam through the whole map. It will do this attack when it starts floating really high up and you can see that its head is on the top instead of the bottom (you can also see a purple streak near its head). This attack starts to where it is facing and it will always start near his vicinity.

The beam will circle around the battlefield three times going from the center to the outer reaches of the area. It is hard to dodge this but a good way to do so is to run away from the monster and wait until it does the first circle. After it goes past you the first time, Wirebug forward immediately and you can even Wirebug twice to be sure. The best way to avoid this is by going under a rock platform and taking cover.

Another ranged attack to look out for will be its thunder blast. This is easy to dodge as the signal for this attack will be a yellowish smoke in a particular area in front of the boss. That area will explode for Thunder damage after a few seconds and the radius is not that big.

Use the resources around the battlefield

Another scenario is when you are able to knock it down and instead of going to it and deal damage, you can shoot the nuke here. The next scenario is when Thunder Serpent Narwa spawns two rock platforms and just floats in the air with its chest exposed. If you know how to beat Zinogre, you will see that its chest looks like Zinogre’s supercharged form.

The next one is the Dragonator. It is positioned on the wall on the north side of the arena. If you see it go near this, just activate it immediately. This does decent damage but not as much as the Splitting Wyvernshot.

Thunder Serpent Narwa has no Low Rank version and it a monster exclusive for the Hub progress. If you have only played the village portion of the game, you are missing out on around 80% of Monster Hunter Rise’s content. It is valuable to know the difference between village and Hub. Even if you know how to level Hunter Rank fast in the village, the process will be different on the Hub side.

Thunder Serpent Narwa is the last urgent mission of Monster Hunter Rise’s base game. There will be new monsters coming as Monster Hunter updates the game or even offer an expansion. Thunder Serpent Narwa drops one of the best materials used for crafting weapons and armor. You will probably be farming this boss a few times before getting a full set for you and your Palico or Palamute.