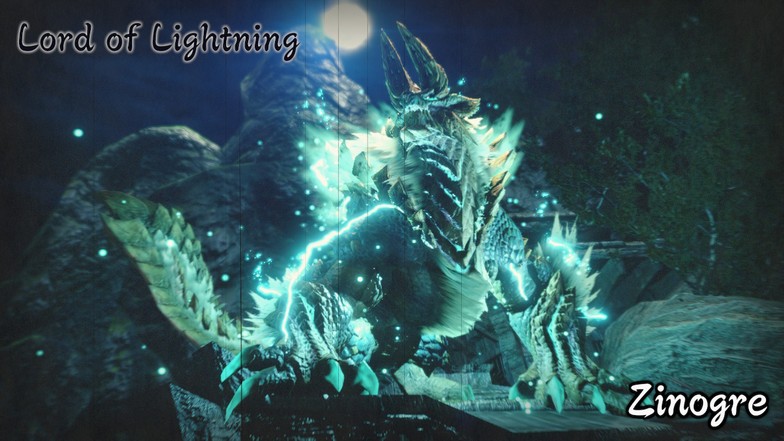 Zinogre is an extremely fast monster that is able to transform into an even faster monster with enhanced attacks. It deals lightning damage and while its attacks are few and easy to learn, it becomes a whole different fight when it supercharges.

This guide will teach you how to beat Zinogre in Monster Hunter Rise and show you the materials and rewards from it that include exclusive ones.

Zinogre is weak to Ice and Water elements. Other weapons are decent if they have high raw damage stats. The weak point is only the head but you deal decent damage to it in general. It is resistant to Thunder element weapons since it spews electricity after all.

When it enrages or enters supercharged status, it will be extremely hard to deal damage to it because it becomes insanely fast and do numerous electric attacks on top of its normal attacks. Keep hitting the weak point to prevent this from happening.

How to Fight Zinogre

While Zinogre has an enraged form or supercharged form, its normal form is already fast with its attacks. It moves around a lot and hops from one direction to another and does a charge attack.

Its tail attack is the most dangerous and it shows its butt before it does the attack. The timing is really hard to master but you can just roll to the side to dodge this. Rolling backward or forward will still hit you and it deals a ton of damage. It also has a ranged attack where Zinogre spits 2 lightning balls at a time. These lightning balls are slow and easy to dodge but if you are near it, you can just dodge behind it and hit the tail.

When Zinogre transforms into a lightning-infused monster, it becomes really dangerous because of its speed and added lightning attacks. Getting hit multiple times will inflict Paralysis on you and this might be the one that kills you.

On top of getting hit and becoming Paralyzed, you will rely on your Palico or Palamute to remove the Paralysis. If they do not, you will most likely get hit by another attack and if you are do not have full health, you will definitely faint.

Before Zinogre enters its enrage or supercharged form, you will see glowing orbs around it that signal that it is gathering energy to transform. You can stop it by hitting a face and doing as much damage as possible and stagger it. It will be hard to do but you can use traps if you want to stop it.

Zinogre is vulnerable at this point so it is best to deal as much damage as possible while stopping the transformation. It will cycles through its attacks again before trying to transform again if you were able to stop it.

Zinogre attacks with a lot of thunder-ranged attacks when it transformed. It is extremely fast and it uses its tail for one of its most dangerous attacks since it is hard to time the dodges. It adds Thunder attacks and adds new moves like Zinogre cradling on the ground and emitting lightning around it.

The transformation also changes Zinogre’s lightning ball ranged attack. It becomes a ranged thunderbolt that is aimed directly at you with a wide and linear path. Just prevent it from transforming and if you have to fight it when it is supercharged, you need to stagger it to revert it back to its normal state.

If you notice some flies floating around Zinogre’s back, there is definitely something there but it is nothing that affects the fight. It is a lootable item when you knock Zinogre down. Once Zinogre is knocked down, you can sheathe your weapon and actually loot this. These are additional Fulgurbugs that you can get if you need this material.

Zinogre is one of the fastest monsters in Monster Hunter Rise. In fact, it might be the fastest when it is able to transform and become supercharged. On top of Zinogre being smaller compared to other hard monsters, it moves around a lot and sometimes ruins your combos. Imagine learning how to beat Mizutsune when it is this small. It becomes incredibly challenging because of their chaotic behavior.