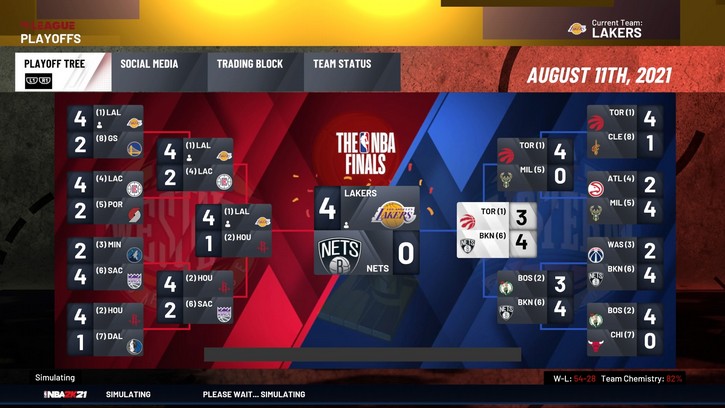 NBA 2K21’s MyLeague is still big as ever and one of the most popular playthroughs involves a fantasy draft mode that lets you start your team from scratch with a pool of players. This guide will aim to provide you MyLeague fantasy draft tips in NBA 2K21. Make sure to read all the details before starting up a fantasy draft so you know how valuable the players are and why they are evaluated that way.

Setting up the Serpentine Fantasy Draft

Once you have chosen to play MyLeague and the difficulty, you will be able to adjust the settings before starting a league. You will have to turn on the fantasy draft and change the draft type to ‘Serpentine’. This will bring you to the draft selection depending on whether you turned the draft order on or off. Setting up fantasy drafts is discussed more in this article. The rest of the article will talk more about some tips and tricks in the draft selection.

Factors in Determining Your Draft Pick

Obviously, the overall ratings and specific attributes can all be seen in the draft board so you can literally choose which players to draft. There are more factors to look into and this guide will prioritize choosing the most valuable player in terms of trading. Why is it good to base it off trading value? It is because if you choose to play the league longer than at least 2 seasons, Age and potential will be a big factor for your team.

Age and potential are some of the biggest factors for trading assets in a team. You might find a trade that looks so lopsided in terms of overall rating and still get rejected. An example of this would be trading for Zion Williamson who is one of the youngest players in the league and already boasts an overall rating of 87. Players like Russell Westbrook or Paul George will get rejected if you try to trade them for Zion Williamson.

This is commonly overlooked because of how the draft board is arranged by the overall rating. If you try to simulate a fantasy draft slowly, you will notice that the AI drafts way below the highest-rated player available. That is because they draft in terms of overall value. This is a rare case of having value as something objective instead of being subjective. Look out for young and high potential players before selecting a high rated player in the draft.

Another overlooked factor is each individual player’s contract. It is crucial to make sure that you have the team’s finances dotted down and how long they their contracts last. You will basically be the acting GM of the team and you should think about the future of your team while also trying to be successful. It is a great balancing act where team owners and presidents teeter between current success and future success.

Player contracts are actually based on their current real-life contracts in the NBA. If you are a hardcore fan of the NBA, this will be a piece of cake to memorize. If not, you can easily search their contracts online on the NBA website. The importance of accounting for the contracts will be more recognizable after the first season.

If you keep track of your player’s contracts and manage them carefully, you can easily build a ‘superteam’ of your own after the first season when you sign at least two superstars on a max contract at the start of the free agency period. The exact NBA salary cap and luxury tax can be seen in the image above.

While contracts are not that valued in trading because the computer would not care about the team’s finances, but you should take advantage of this to improve your team. If you are aiming to sign superstars in free agency, you can first check about whose contract will be up and if they are a restricted free agent or an unrestricted free agent.

If they are a restricted free agent, it will be nearly impossible to have them sign a contract with you because their current team will most likely match that contract and they will be forced to resign with their current team. Remember, you can only offer up to 3 contracts a day during the moratorium period in free agency.

Drafting players on a 1 year deal with an enormous contract will be a priority because this is the best way to clear cap space for the free agency. The biggest contracts you can get without sacrificing early draft picks are Paul Millsap’s $30,500,000 contract and Mike Conley’s $32,511,623 contract.

There are even lower picks to choose from with huge 1-year contracts to hold for a free agency like Marc Gasol, Chandler Parsons, Serge Ibaka, Danilo Gallinari, Goran Dragic, Evan Turner, Tyler Johnson, Kent Bazemore and Jeff Teague. These players hover between $19 million to $26 million contracts and drafting 2 or 3 of these players will guarantee you to sign 2 max contracts for superstars in free agency. Of course, the rest of your team will have to be low on a budget like Jayson Tatum, Luka Doncic and Zion Williamson.

Role in the team

This is harder to control because a player’s role is already set before they even enter your team. The role set for each player is based on their current role in their specific team before the fantasy draft. For example, drafting a player like JJ Redick will guarantee him a starting position if there are no shooting guards available that are currently a starter for their team.

Be careful when you draft players who have a low overall rating but have a high role within the team because they will automatically be given minutes after the draft and they will get displeased when you reduce their minutes. This could lead to lower team chemistry and even lower his overall rating more.

You should choose the players you would like to play and control for the rest of the playthrough. Just avoid players who have insanely overpaid contracts that last for more than 1 year because they will be detrimental to your team’s success for a long period.

Tips and Tricks When Drafting

These are the things you should remember when drafting or picking a team.

With all the information you have now, it will only take a few more moves or signings to create your own superteam. Playing a fantasy draft is fun and unique which adds more replayability to the game. Hopefully, this guide helped you create the team you want without needing to abuse a few game sliders that could make things unrealistic and unfair.