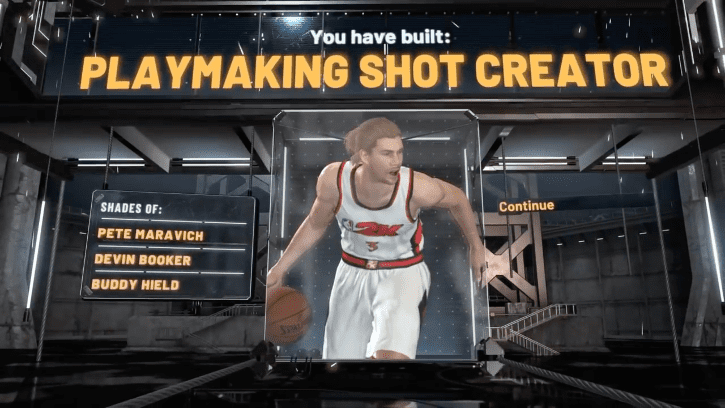 Are you facing some difficulties in finding the best shooting guard build in NBA 2K21? Don’t worry as in today’s article, we will show you every bit of detail that you can replicate in order to make your player an unstoppable scoring machine.

And no, we aren’t just making another build guide. Our advice when creating these complete build guides is tested to bring you optimal results as per this years gaming mechanics, and player possibilities in terms of attributes, badges and more.

So, if you want to try out this incredible shooting guard build, load up your NBA 2K21, and start exploring the little details that make the biggest difference.

What Is a Shooting Guard?

Before we jump into the guide, for the newbies out there, let’s cover what a shooting guard is and what responsibilities this position has.

Not to be confused with a point guard, a shooting guard is the player within the squad that usually has the best shooting from the entire team. Their responsibility will be to essentially score as many shots in the basket as possible from pretty much every shootable position on the court.

On top of that, shooting guards are expected to often create chances by themselves using their dribbling skills, and because of this, you will see further in the guide how we put a strong emphasis on the playmaking attributes, badges, and overall skillset of the build.

In terms of skill breakdown, you are given quite a few options to pick from. The one we are going to go for is the one with an equal split of shooting and playmaking as those two are the core two skills that we need to optimize for out shooting guard build.

If you aren’t sure of which exact pie chart we are talking about, please take a look at the image above and use that as a visual reference.

Now, you could pick a pie chart that leans more towards either shooting or playmaking, but you will only get hall of fame badges on one of the core skills. Since this is something that we can’t afford and want to get the best badges for both the playmaking and shooting skills, we are going for an even split between the two with little defense and little finishing.

For physical profile, you should really only be looking at one of the pie charts, and that is the first one. It provides us with with a lot of speed, which is super important for you as a shooting guard, quite a good chunk of strength, which too has quite a lot of weight on your players’ overall performance this year, and just enough vertical.

Any of the other physical profiles just aren’t optimal for what we are trying to build here.

With the 424 attribute points which you are given, what we want to do is literally max out our shooting attributes, and playmaking except post moves. For the complete distribution of all shooting guard attribute points, check out the four tables below.

If you are wondering what all those tables are, they are the tables where you need to allocate your attribute points, which comes after selecting your physical profile. We have done them just like they are presented in the game so that it is easier for you to implement them easily and more accurately.

In terms of body shape, it really doesn’t matter. In such cases, we are going to go for defined purely for aesthetics. For height, if your main goal is to get your player as much speed as possible, going lower than 6 foot 5 is really not going to benefit you that much. In fact, it can actually have the opposite effect as you will be losing out on strength.

On the flip side, if you just go up by one to 6 foot 6, you will begin to lose out on ball handing and speed, which is something that we can afford as speed is at the core of our build. So, stick to 6 foot 5.

As for the weight, you really want to stick to the lower end of the scale. This will not only help you with maintaining your overall speed but also your acceleration, which is just as important. So, we’d recommend that you stick at 190 lbs. Going any lower will hurt your strength, and any higher will make you slower, and neither are ideal scenarios.

And finally, for the wingspan, we would just recommend to stick to the default 81.5 inches. This way, we aren’t losing out on any ball handling while maintaining a high level of shooting and the ability to speed boost with ease.

For takeover, we are going to go for the ‘Spot Up Shooter’ as it will have a big impact on our efficiency when it comes to catching and shooting situations. Any other, we feel like are a waste and can only hurt our build.

The badges that we select for our shooting guard build have the capacity to take the player to a whole new level. This means that if you don’t go for the ones that we recommend, your build isn’t going to be as optimal as possible. Obviously, which badges you opt in for heavily depends on your style of play as well as your weaknesses and strengths as a shooting guard.

As we only have a single potential upgrade in this category, we will make it count by upgrading:

1) Bronze Relentless Finisher: This badge reduces the fatigue effects from continuously finishing at the rim with contact. As we are building a player for the shooting guard position, you can only imagine that such a badge brings a great amount of value to the table.

1) HOF Deadeye: This badge will reduce the impact of a defender who is closing out, making your shooting guard that much more dominant.

2) HOF Hot Zone Hunter: ‘Hot Zone Hunter’ is one of the most important shooting badges that you can go for after you get hot zones. It will boost the short percentage for shooting attempts taken in your shooting guard’s favourite spots on the court.

3) HOF Range Extender: Essentially, this badge will extend the range from which your shooting guard can effectively shoot.

4) Gold Volume Shooter: We recommend this badge because it will boost the shot percentages as shot attempts accumulate throughout the game.

5) Bronze Corner Specialists: This is a great shooting perk that will be of great benefit when you are pushed down to the corner as it will give you a boost in shots taken near the corner.

6) Gold Clutch Shooter: The ‘Clutch Shooter’ badge will increase your player’s ability to knock down shots in clutch moments.

7) Bronze Hot Start: Using this badge will improve your player’s shooting ability after making a successful first shot until a miss occurs. A great perk to have as a shooting guard as every next shot after your first successful basket will get better.

8) Silver Green Machine: Making use of the ‘Green Machine’ will increase the bonus given for consecutive excellent releases from shooting attempts.

9) Gold Tireless Shooter: As a shooting guard, having the energy to perform on a high level even at the end of a match will prove highly beneficial. This is why having a badge that can improve your player’s ability to make shots even when fatigued is very important.

As a shooting guard, your players’ playmaking ability needs to be optimised as much as possible by using the best badges for the shooting guard position. There are a total of 22 upgrades for this position, and so, we will drop them on 7 gold upgrades, and one bronze.

1) Gold Ankle Breaker: Making use of this badge will improve the likelihood of freezing or dropping a defender during dribble moves. It is the perfect badge if you know your dribble moves and can make a defender drop. This will open many opportunities for three-pointers.

2) Gold Unpluckable: This badge will reduce the chances of getting stripped by a defender. A super important badge to have as a shooting guard that will be scoring most of the points in the game.

3) Gold Tight Handles: Using this badge will improve your player’s ability to break down a defender. This badge will help greatly if you are looking to get in close to the rim and complete contact dunks.

4) Gold Stop & Go: As a shooter and a playmaker, your ability to stop and start with the ball all the time is vital for being successful in both distributing the ball and creating scoring opportunities.

5) Gold Space Creator: Making use of this badge is recommended because your player will gain a boost in their ability to create space from a defender. Very important badge when calling for a screen is not a viable option.

6) Gold Quick First Step: This perk will give your player more explosive first steps out of triple threat and size-ups.

7) Gold Handles For Days: This badge is very important for our shooting guard as it will reduce the amount of energy that is lost while your player is performing dribbling moves.

8) Bronze Bail Out: This badge will increase your player’s chance of successfully completing a pass from mid-air.

1) Gold Clamps: This perk will boost your players’ ability to stay in front of the ball handler on the perimeter. A great overall defensive badge.

2) Gold Intimidator: The Intimidator badge will force your opponents to miss out on a lot more shots than they otherwise would when they are playing against you.

3) Bronze Pick Pocket: This badge will improve your player’s ability to steal the ball from the player that is handling the ball. An overall great badge to have.

Note: By all means, you can have the bronze upgrade on whichever badge you feel you need the most. Besides ‘Pick Pocket’, we would also recommend the ‘Chase Down Artist’ badge.