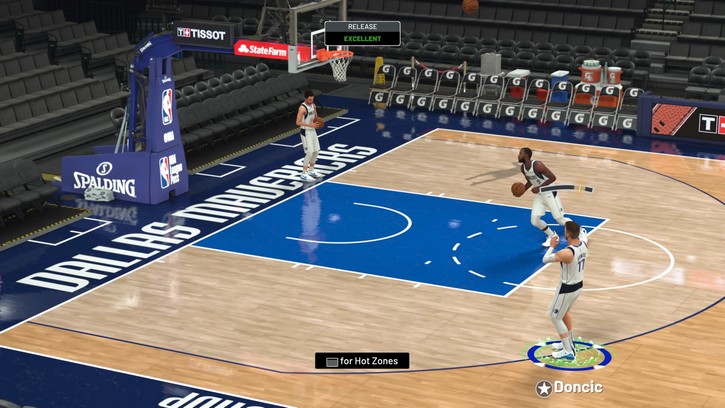 What is the Shot Meter?

The shot meter is a visual guide where you can base your shot timing to execute better releases. The shot meter shows once you go into a shooting motion whether it is a jump shot or any form of shot driving to the basket like a layup. Your goal is to have it as close to the middle as possible to get the excellent release. It will turn green if you manage to do it perfectly and will most likely make the shot go in.

The difficulty adjusts the shot meter too. If you play on Hall of Fame, it will drastically increase the difficulty with the shot meter and you may rarely see the green for excellent releases. The shot meter is also unique with the layup or finishes in the paint. It also shows when you attempt free throws which is like shooting a normal jump shot.

How to Turn Off the Shot Meter

To turn off the shot meter, you will need to go to options and look for the controller settings. Once it is opened, you can find the shot meter near the top of the settings. You will have 3 options other than to turn it off or on. It can be either on, off, or free throw only.

Players may want to turn this all off to make the game feel more realistic. You can also follow some tweaks to the NBA game sliders to even make it more realistic. This article here will show a great user and CPU sliders to copy which makes a whole realistic feel to the gameplay.

The other reason people would turn this off is that they feel distracted trying to look at the shot meter when it shows. Sometimes, players play better with it turned off because they prefer to rely on their timing based on looking at the apex of a players release or jump even. It is even better when you are driving to the basket and to just time the release when the player is at its peak because it can get confusing looking at the shot meter during this motion.

It is all a matter of preference and it does not give any major advantages to players who have it turned on or off. You can still see the green shine for the excellent releases below your feet even if the shot meter is off. The indicator is still there to tell you when your release is a bit off even without the shot meter.

If you are easily distracted, it is better to turn it off and get used to playing that way. It gives you slightly more vision than you realize because you take a split-second looking at the meter when taking a shot especially when attacking the paint with contact.