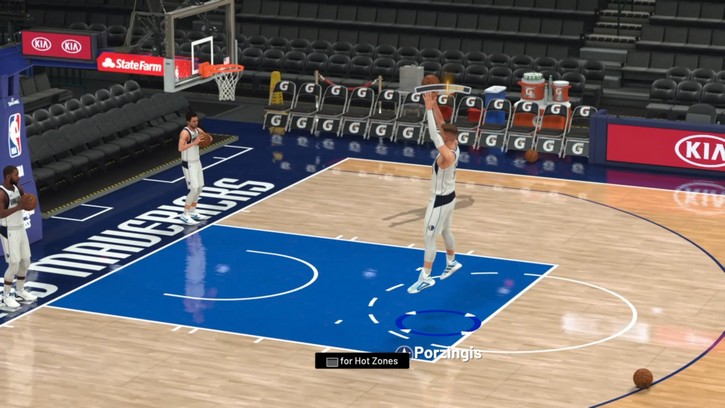 The dream shake has been the most exciting move to see skilled big guys do in the NBA. It takes some fancy footwork and incredible skill to execute. It allows versatile big men who do not rely mostly on their strength to score inside the paint. This guide will teach you how to do a dream shake in NBA 2K21 with any player no matter what their position may be.

What is a Dream Shake?

The dream shake is a post move that uses a variety of spins, fakes and misdirection with the ball. It is done by establishing a pivot foot first and doing all these arrays of moves without lifting your pivot foot in the low post. This is popularized by NBA legend ‘Hakeem Olajuwon’ who dissected every defender who tried to guard him including one of the best rim protectors in his generation such as Shaquille O’Neal and Dikembe Mutombo.

The move is not as effective as it is in the NBA. In NBA 2K21, defenders can recover quickly even if they are faked so the offensive player will need to predict when the defender will bite on the fake and shoot accordingly. There are so many moves to make with your pivot foot and you can go and shoot left, right, forward or fade which makes it extremely hard to defend.

It is also usable by guards and popularized by players like Kobe Bryant who can do it frequently with his amazing footwork in the post.

How to Do a Dream Shake

There are multiple ways to do the dream shake and that is what makes it so versatile. You start by getting the ball with a live dribble or an active dribble. You hold the L2 button and back down against your defender. Slide the right analog stick to the direction you want to fake first and quickly slide it in the opposite direction when your player starts to move towards the first direction you chose.

Note: If you are not close to the basket when trying to aim the right analog stick towards the basket, you might attempt a runner instead which is incredibly inefficient. It is also distracting to see the shot meter up all the time when doing the move so you can turn off the shot meter if you want.

Benefits of Using a Dream Shake

The main benefit of using a dream shake is to have multiple ways of scoring the basket even without a live dribble. You can keep your enemies guessing several times before making the decision of which position to shoot the ball. It gives offensive players more opportunities to score even without good attributes.

The dream shake is just another tool to add to your offensive arsenal. Combine it with your knowledge about doing drop steps, up and unders, post hooks and fadeaway shots, and you have a wide array of moves your opponent has to keep in mind to guard you. You can practice all of these moves in freestyle or scrimmages in the main menu.