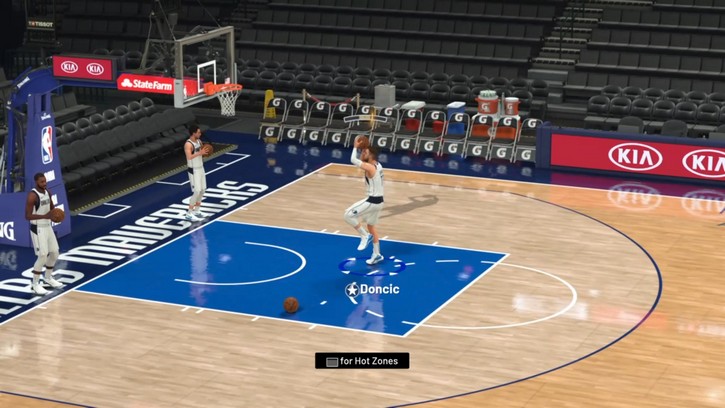 The floater is one of the greatest moves ever created particularly for small guards who have trouble finishing in the paint with the frontcourt players towering over them. It is a crucial move to learn and it is one of the hardest moves to block because of its quick release and high arcing shot. This guide will simply teach you how to do a floater in NBA 2K21.

Quick Navigation show
What is a Floater?
How to Do a Floater
Benefits of Using a Floater
Conclusion

What is a Floater?

A floater is a basketball move where the offensive player uses a high arcing shot to ‘float’ the ball into the basket. It is usually used where you are far enough to make a layup and close enough to get your jump shot blocked by taller defenders. It is used mainly to get the ball past these tall defenders and float it over them with a high arcing quick-release shot.

How to Do a Floater

The most simple way to do a floater is to use the right analog stick and aim it away from the basket. You have to be just far enough that the player will not attempt a layup and close enough to not go for a step back or fadeaway. It is easier to do when your player has enough momentum and you just have to time it while near the free throw line. The floater also depends on the settings you use and how the right analog stick is programmed to function.

Some might favor using the absolute setting because of how the camera can adjust especially on a fast break. If you are already used to the camera angle setting from the 2K series, there are no significant advantages between both control settings.

Benefits of Using a Floater

The quick release makes it insanely hard to time for the block but it is also hard to time the excellent release. It takes a lot of skill to even get a great release every time but it will be effective to use for small guards. The Tear Dropper badge will be specifically to help floaters and runners score more often and it almost a must-have for point guards who are also looking to be threat when driving to the basket instead of just being able to kick the ball out.

The quick-release can be hard to master as it can be different for all the guards and it can be heavily dependent on how you are positioned to the basket and if there is a defender right in front of you. You should also try turning off the shot meter to perfect the timing better if you are playing different players all the time and not specifically your MyPlayer.