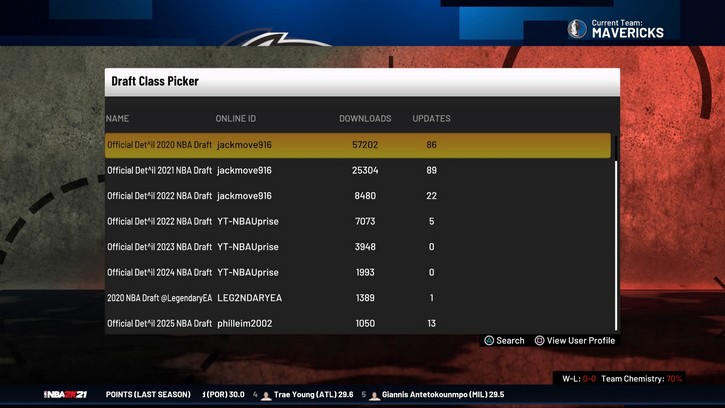 The NBA Draft is one exciting part of MyLeague in NBA 2K21. An auto-generated draft class can feel underwhelming if you spend so much time scouting potential rookies and end up knowing that none of the players in the draft was even worth playing. There are countless user-created draft classes out there to explore. This guide will teach you how to download a draft class in NBA 2K21.

Setting up a Draft Class

To set up a draft class, you have to finish all the settings for your MyLeague and wait for it to start. Right before the season starts, you will be given an option to choose a draft class for the current season to be played. You can choose to download a draft class online, created an auto-generated draft class or load your own saved draft roster which can be turned into a draft class.

The best way to make a MyLeague season unique is to download a draft class online. There are plenty of content creators out there constantly making downloaded content for the 2K community. Kudos to them for their hard work and effort to add more content to the game.

You will see updated versions of multiple projected NBA Draft prospects for every generation imaginable as long as someone has uploaded them to the NBA 2K servers. You will need an internet connection and connect to the Playstation Network. It is also possible to download rosters and draft classes online without a PS+ subscription.

Benefits of a Downloaded Draft Class

The main benefit of downloading a draft class is that you will experience a whole new game depending on the type of draft class you downloaded. There are choices from every NBA draft class prospects from 2021 to at least 2024. There could not possibly be any realistic draft class over 2024 because they would most likely still be in junior high at the moment.

Pair this with a realistic game slider settings to have a more immersive experience for consecutive seasons in MyLeague. You can even find user-generated content based on your own local teams if you are not from the United States.

Another benefit would be the addition of balancing in the draft classes. You will not find any player hovering over 82+ overall rating in the auto-generated draft class. Is that realistic? In today’s NBA, it can happen occasionally but their ceilings are limited and you are forced to play an underwhelming league after 4 seasons of playing.

You have players like Zion Williamson and Ja Morant showing off and getting 84+ overall rating on their first year. Compare the recent years with guys like Donavan Mitchell, Jayson Tatum, Luka Doncic and Ben Simmons who all are rising superstars during their rookie campaign. Finding these players from the work of other users adds the mystery of the real NBA Draft Lottery and forces you to scout.

Another problem that can happen with a downloaded draft class is that the opposing teams in the draft often pick the right players for their current picks. It seems that they know more about who is going to be great based on the projection and internal data.

Benefits of an Automated Draft Class

The benefit is that everything is consistent every year. You might discover draft classes with 2-3 players having 80+ overall rating with different potential levels. The great thing here is that they are more random in the draft projections. Some of these top-rated players, if not scouted, can be found as low as the 15th-20th draft projections and it can be exciting to find scouting results and be active with the management.

It also puts more value into your staff where the scout’s rating can be utilized more efficiently. Investing more money with a better scout will lead to better draft picks and top-rated scouts are quite cheap compared to other staff positions like the CFO or the head coach.

Another reason the automated draft class is used is because of the balancing issues you can have when downloading a class. Auto-generated classes tend to be more balanced and consistent with all the players from the whole first round of the draft up to the second round of the draft.

The computer drafting for their respective teams will be more random compared to a user-generated draft class. It puts more realism as well but the players will be all randomly built, unlike the downloaded draft classes that are usually based on real-life prospects.

Getting an NBA Draft Pick

For a fantasy draft league, it might be difficult to judge where these lottery picks might end up because of the large variance involved. It takes into account the fantasy draft picks, game simulations, player injuries, scheduling and trades completed to determine how a team can fair during the season.

For a normal league, there are more simple solutions in trying to secure high draft picks. You can find more details here.

Draft classes are exciting ways to keep your games fresh every season in MyLeague. Downloaded draft classes add another depth to it and require the work of generous and dedicated players who upload their work to the 2K servers. There might be balancing issues but you can choose the one you want and try it out to avoid spoilers that can ruin the fun in the NBA Draft.

At the end of the day, you decide which is more entertaining and what your preferences are. If it is adding more realism or quirkier playthroughs, you can research content creators and find their well-crafted draft classes online to download.