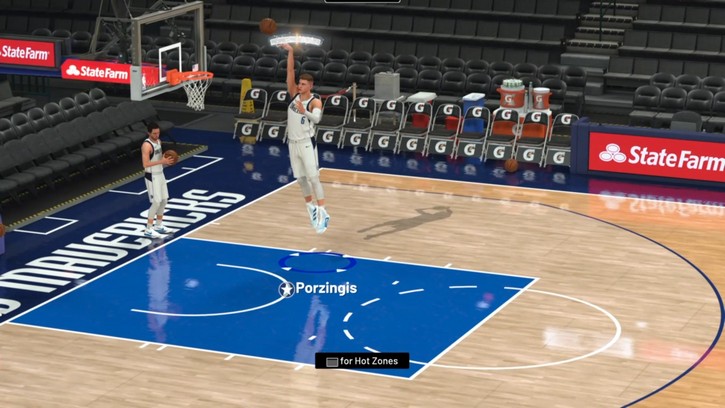 The drop step is a smart move that involves a great position in the paint to execute. It is used commonly by players who play in the paint that worked hard to get that position. This guide will show you how to drop step in NBA 2K21 and use it as efficiently as possible.

What is a Drop Step?

A drop step is a move where the offensive player uses his position by staving off the defender using the other half of his body and uses the opposite pivot foot to step and go straight to the basket. This can also be used when posting up instead of getting in position and waiting for a pass. As long as the first step is done with the reverse pivot towards the basket, it is called a drop step.

The reason why it is effective because the defender is getting sealed by your position and helps you get to the basket without the primary defender bothering you because you are using your body as a shield to block them from your shot attempt.

How to Do a Drop Step

To do a drop step, you must be in a position to either back down and post up your defender or have the ball at the low post with a live dribble. Hold the L2 button, the button depends on which platform or controller you are using. and keep backing down the defender and see the defender’s position and where he is guarding you.

If you are backing down and the defender is covering the right side, release the L2 button and move the left analog stick immediately to the opposite side and towards the basket. If your player is quick enough or has a high-grade Dropstepper badge, you can easily get past the defender and seal him before he can get to your shot attempt. The shot meter might be a bother while shooting near the basket so you can turn off the shot meter if you like.

Benefits of Using a Drop Step

The main benefit of using the drop step is to seal the defender while going straight for the basket. If they try to force their way through to contest, they will go through your body first before reaching the release of the shot and would most likely result in a shooting foul.

It is a great way of using your quickness if you have that advantage against the defender. There are ways where you can use this to even trick your defenders by doing pump fakes or fading for a jump hook after the first step. You can even drop step into a dream shake if you want to as long as you do not stand in the paint for 3 seconds. This is what makes basketball a beautiful game and the potential moves you can make are limitless.

The drop step is a safe way of getting an easy basket when executed perfectly. You should keep an eye out on how long you have been in the paint as standing inside the paint for 3 seconds is a violation and will result in a turnover. Try to practice the move in freestyles or scrimmages to do it quicker when in a game. This is a great move to add to your offensive arsenal along with other moves like the dream shake.