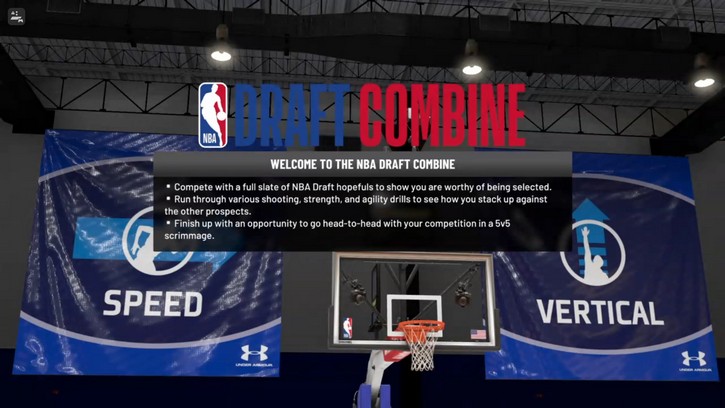 The NBA Draft Combine is a real event where potential NBA players are assessed for every minute detail. This is one way of establishing yourself as the best prospect in the NBA Draft in terms of pure talent and skill. Finishing the Draft Combine can be mind-numbing because of all the drills you have to go through. This guide will teach you how to finish the NBA Draft Combine in NBA 2K21 and potentially finish better than what your player can accomplish.

The Vertical Standing Jump is the first test you will go through in the NBA Draft Combine. You will need to spam alternately between L2 and R2, depending on the platform you are playing on, as you prepare to do the vertical standing jump and press the triangle button when it shows up so you can jump as high as you can. Your character build will matter here because if you are more bulky, you will have increased strength and less vertical during the character customization process.

The Running Vertical Jump will be exactly the same as the Vertical Standing Jump in terms of mechanics. You will alternately press L2 and R2 as fast as you can for the preparation and the triangle button for the jump.

In my opinion, the Bench Press is the hardest drill in the NBA Draft Combine. You will need to hold both left and right analog sticks either up or down depending on what is shown in the screen. You will then notice an animation show up in the middle to help guide you on what to do. There will be a tiny ball in the middle where you have to balance and not let it hit the plates until you finish the rep.

Be gentle when you hold both the left and right analog sticks and never push it all the way up or down. If you do, it will almost fail immediately and you have to spam the X button repeatedly to recover. You will still gain a single rep from failing but the recovery will take plenty of time and this drill is time based. I did quite poorly on this drill because I only got a hang of it towards the end.

This drill is easy and highly dependent on your physical stats. Do not do the same mistake I did where I accidentally started to the left instead of going to the right. It will always start going to the right and just hold down the L2 button while moving laterally. Physical stats like speed and quickness will help you get a better time here and you can also increase your lateral quickness by spending VCs on it.

For the Lane Agility drill, you will just have to memorize the movement on where you need to go to during the two trial drills. Run through the course and always hold L2 when you are moving. There are only two exceptions in holding the L2 button. It is where you have to sprint and you can easily remember it because you can only use the sprint when you are moving straight in this particular drill.

The last physical assessment drill is the Sprint. You will just alternate between pressing L2 and R2 to do the sprint and the icons will show up on top when you need to press them. Do not spam these buttons because it will not work and even give you a lower time. Your physical stats will also be significant here and being taller or bulky will slow you down and rank you down lower which makes it quite impossible to rank 1st as a big man.

There are multiple shooting drills in the NBA Draft Combine. They will test your shooting ability at every part of the floor. The first drills will be the catch and shoot. There will be a tiny gray ball icon on the floor where you have to be stepping on to get an automated pass from an AI. Once you reach the gray ball icon, you will immediately get passed the ball and you can take your time to shoot.

As an experienced player of the game, I choose not to look at the shot meter when playing because it can throw you off. Sometimes the shot meter does not start when you press the shoot button because of the manner of how you received the ball. Your player will gather differently depending on the position you caught the ball.

These shooting drills will test your ability to catch and shoot and shoot off the dribble. It will also be tested from both the mid-range and the 3 point line. Keep a close eye on the gray ball icon on the floor when doing the shoot off the dribble drills. It feels a bit awkward when you focus on trying to get to the designated area first because you will not be able to shoot if you press the shoot button when you are not stepping on the gray ball icon.

This is also heavily influenced by your shooting stats and having a lower stat will decrease your chances of making the shot or making excellent releases. Do not worry about doing bad in this drill if you are not a shooter. There are more ways you can increase your draft stock value in the game.

After all the drills, you will participate in a 5on5 scrimmage where you will be playing with and against the top picks in the draft class. There will be a teammate grade for this but unfortunately, you will not be getting VC from this game or any part of the NBA Draft Combine which I think is pretty greedy from 2K as this event takes a great deal of time.

Focus more on winning the game first before trying to improve your stats and your teammate grade. Keep playing normally and use the strategies mentioned in the “A+ Teammate Grades” section in this article. After the scrimmage, you will increase your draft projection and have more NBA teams interested in drafting you.

The NBA Draft Combine is only one process of getting drafted to the NBA. Performing well in this area is only optional but will greatly increase your draft stock if you do great. There are some areas that are limited by your position, physical attributes and overall skill so do not worry about not performing perfectly on every aspect of the NBA Draft Combine.