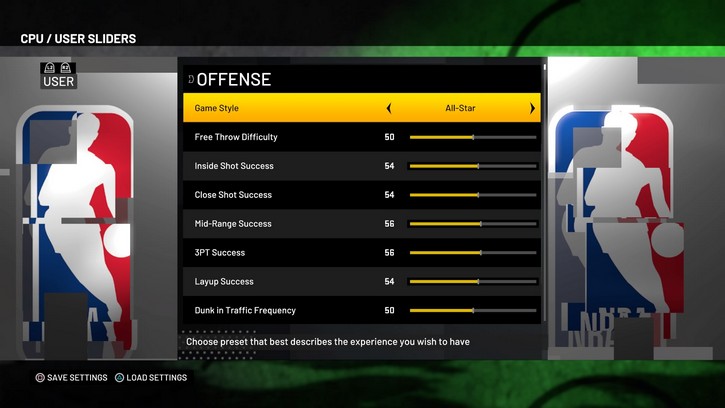 The inception of these game sliders came from thousands of hours playing MyLeague and Association mode nearly a decade ago. This is the main game mode I play every 2K game in the series and I find countless ways to make every playthrough unique. Playing 82 games in a season with 10 minutes per quarter is the main setting I use and I want to make playthroughs as realistic as possible.

NBA 2K tweaks their difficulties occasionally and the superstar difficulty is the most realistic so far. There are a few tweaks and adjustments I made to improve it as the CPU is still quite overpowered because of how your own teammate’s AI can potentially set you back.

With how the defense is played right now in the current NBA, players are given more room to operate and great offense wins most of the time against a great defense. Threes are more common but that does not mean they fall more often. Great defense with contact are most likely a miss in NBA 2K21 for the user side but making the shot happens quite frequently in the current NBA compared to the game.

For these offensive sliders, it still favors the CPU in some aspects but it should not be that bad compared to a superstar or hall of fame difficulty. This aims to tone down their offense more while making it a bit easier for you to score as well. Their mid-range and three-point shots are unbelievable in the hall of fame difficulty that it is just plain unfair.

Feel free to reduce your user sliders by -1 if you want a more challenging style of play. You can turn off the shot meter to make it even more realistic and rely on each player’s shot timings to get perfect releases.

The key thing adjusted here is the jump shot defense strength on the CPU slider side. They play near-perfect defense all the time with no mental lapses and it is a bit more realistic to have shooters ignore the defense more when they are late and are already about to release the ball.

Steal success is decreased on your side because once you get a certain feel for the CPU and how they dribble, it will be easier to swipe and steal the ball instead of the bulk of your steals going to intercepts. Help defense strength is also increased as it is a crucial part of team defense in the NBA and it should be rewarded well.

The attribute sliders should not be tweaked at all as it all depends on the specific player’s attribute. It would be kind of pointless to tweak this and give more advantages to specific players who are built around the particular attribute. Player balances are always done and handled by the 2K series team and this is mostly where their balances go instead of adjusting game difficulties through user and CPU sliders.

Tendencies usually only apply to the CPU and how you want them to play. Most teams in the NBA right now would rather take three-point shots than mid-range shots because of how lax hand checking has been in the NBA. Three points are always better than two points anyway and this mindset should be applied to the 2K games as well.

Foul sliders should be almost the same as the hall of fame difficulty as fouls are common especially during the playoffs in the NBA. You can lessen these foul sliders to your liking if you want a more old school style of basketball. If you do, you should increase the defensive contact frequency above too.

These are all the same sliders from the superstar difficulty and it should be fairly accurate. The speed with the ball is already supposed to make you slower in the game but not as much. This is how chase-down blocks frequently happen in the NBA because of how easily an athletic player can recover from a turnover to a fast break opportunity.

The increase in speed with the ball for the user slider is to somehow compensate for the perfect reaction time the CPU has when intercepting the ball. It feels like they always catch up to you after successfully intercepting a ball which should always give a running start for the player who tapped the ball away.

By playing these game sliders with absolutely no bias towards how your performance is doing in your current game, you can simply adjust the other sliders you find that seem unrealistic for your playstyle. This is entirely opinionated and heavily based on my thousands of hours playing the 2K series. Feel free to adjust the game to your liking to what you feel is the more realistic NBA sliders or even base it off of different generations.