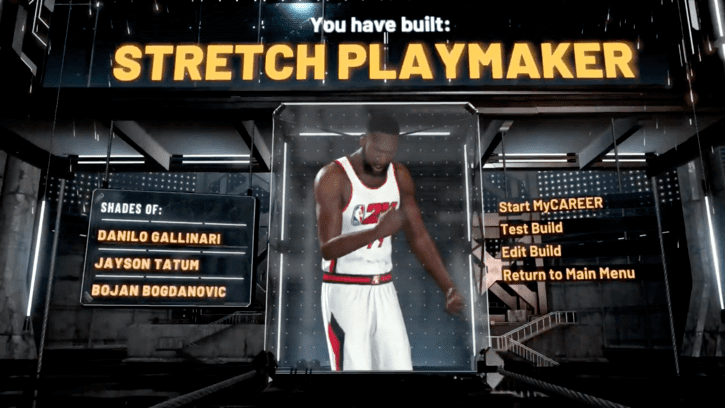 Building a player in NBA2K21 from scratch can be quite a challenging task to do. With all the different physical attributes, skill breakdowns, and badges to pick from, it can easily get overwhelming, and push you in directions that could conclude in you building a player that is quite simply not build to its absolute potential.

If you have played NBA 2K20, you probably thing that you can just replicate your old builds into 2K21. This is where we’d like to tell you that you are mistaken. In this years version of the franchise, there are certain attributes that have been made a lot more powerful. For example, just last year, strength wasn’t considered as a great physical characteristic that you should learn towards, however, this year, strength is quite important.

So, in today’s article, we will show you the best stretch playmaker build in NBA 2K21. This example is so optimal that after testing it during the testing phase, it’s easily an absolute beast and a complete nightmare to whoever you face next in your career.

And lastly, regardless of whether you are a complete newbie and want to fast track yourself to the highest level or are a seasoned player that is looking for some secrets, this article is just for you.

What Is a Stretch Playmaker?

Before we get into the build, for all the newbies, if you are wondering what is a stretch playmaker in NBA 2K21 is, what his role on the court is, and anything else that you need to know, we will cover it below.

Essentially, a stretch playmaker is an extremely valuable player to the team. Their job is essentially to make things “happen”, whether that is defending, ball distribution, or open up opportunities for teammates to score.

As a playmaker, the player is essentially the engine of the entire team, and speeding up and slowing down the pace of the team’s play is pretty much entirely the playmakers responsibility.

In NBA 2K21, there are four different skill breakdowns that you can pick from that will pretty much define the core characteristics of your player. They are finishing, shooting, playmaking, and defense / rebounding, and below, we will take a closer look at what each one can provide for your player. Then, we will select the one appropriate for our build.

The finishing skill breakdown will give your player the characteristics of an offensive player when playing in the paint. Some of the main abilities that the player will gain upon using ‘Finishing’ as your skill of choice will increase the likelihood of succeeding in close shots, diving dunks, and standing dunks.

Essentially, if you are looking to build a striker that is designed to close in points after points, then this is the skill that you should adopt.

The shooting skill will provide your player with a set of core characteristics that are perfect for longer range shots that are outside of the paint. Players with the shooting skill will be able to more easily score in the basket from attempted three pointers. Furthermore, your player will be much better at distributing the ball from free throws, making him a pretty good finisher/playmaker. Essentially, it is a pretty good skill to use on your player if you prefer to ‘wow’ the audience with amazing, long-range strikes.

Upon selecting the ‘Playmaking’ characteristic for your player, they will be given the ability to pass the ball all around the court with higher accuracy. Furthermore, their ball handling will immensely improve. Not only that, the players dribbling skills will become substantially more precise.

When it comes to our stretch playmaker build, what you want to do is opt in for this option, which greatly leans towards shooting and playmaking characteristics with a little bit of finishing and defense / rebounding.

This particular skill allows your character to develop abilities to box out opponents in interior defence and perimeter defence by quite a significant margin. Moreover, by selecting this skillset, your player will become better at stealing the ball from opponents as well as executing attacking and defending rebounds.

If you were to build a defensive player, this skillset would be a no brainer, however, in our case, it isn’t something that we need.

When it comes to physical attributes, you will have the option to pick out from four different pie charts, each providing your player with a care set of physical abilities including agility, strength, and vertical.

Note: As we previously mentioned in the article, strength has quite a substantial importance as compared to previous version of NBA 2K series. So, keeping that in mind, let’s jump into the four different options and pick out the best one for our stretch playmaker build.

Note: Regardless of the position you are building your character for, always make sure that you select a physical profile with quite a substantial amount of strength. This will allow you to not only play much stronger and more confident on the court, but you will also find it easier to drive to the rim.

After finalizing the physical profile of your player, it is time to distribute all of your 423 attribute upgrade points in the right places in order to create a stretch playmaker powerhouse. Please feel free to copy the contents from the individual tables below.

If you are a new NBA 2K player, you are probably a little confused as to what is going on with the tables above. However, there is nothing to worry about as we will take a closer look right now and explain the tables in a little more detail.

Next up, we are going to define our player by body type, weight, wing span, and height. They are all very important aspects that can boost or reduce your players overall stats, therefore, if you desire to build the best stretch playmaker, we would recommend that you follow closely.

In terms of body type, out of the few options, we are going to opt in for ‘Defined’. it not only looks aesthetically good but also doesn’t affect the vital attributes that we need for the player to perform at peak level.

In terms of height, by default, you are recommended 6 foot 9, and to be quite honest, we believe that this is the sweet spot. If you go any higher, your player will become clumsier, which is a major drawback for a playmaker, or if you go too little, his strength is likely to take a hit, which as we mentioned previously, is super important in 2K21.

For weight, by default you are recommended to stay at 235lbs. We do, however, believe that setting your player down to 222lbs is significantly better, especially for a stretch playmaker build. If you got as little as 223lbs, you will begin to loose out on speed attributes, and that is something that we definitely need in order to perform at the highest level.

As per the wing span, we are going to look at increasing it by 4″ all the way up to 90″. This will be incredibly important when it comes to blocking shots, stealing balls from opposing players, and grabbing rebounds.

After finalizing all of the physical attributes to your player, it is time to pick out one of the four takeovers. They include:

If you have copied our guidance from above, you should receive the ‘Stretch Playmaker’ build name.

If you want to test your build in the testing phase at their best, feel free to bring up their overall rating to 99.

And finally, before we finish off with building the perfect stretch playmaker build, let’s not forget about the badges who are extremely vital to get right. After some experimenting, we believe that we finally have the best combination of badges that will take this build to a whole new level. So, if you want your opponents to fear you, feel free to copy our choice of badges from below.

Unfortunately to say, for finishing, we only have one Bronze badge to play with. So, it is very important to make it count. The badge we are going to go for is:

1) Fancy Footwork: This badge will improve the player’s ability to beat defenders with an advanced layup or dunk gather. Very useful when it comes to dribbling.

1) HOF Catch & Shoot: This badge will boost the chance of hitting a jump shot immediately after a catch from a rebound or a pass.

3) Silver Difficult Shots: Using this badge will improve your players’ ability to shoot difficult shots off the dribble.

4) HOF Hot Zone Hunter: This badge will boost the players’ shot percentage for attempts taken in the player’s favorite spots.

5) Silver Slippery Off-Ball: This perk will strengthen the player’s ability to get open off the ball.

6) HOF Range Extender: This badge will extend the players’ range from which they can effectively shoot.

7) Gold Volume Shooter: Use this badge to boost your players’ shot percentages as scoring attempts accumulate throughout the game.

Note: As a stretch playmaker, besides distributing the ball and dominating the court, you will also have the responsibility to sometimes shoot and score points as well as defend for your team. If you remember from above’s physical attributes, we decided to make use of the pie-chart that majors in strength and agility.

1) HOF Handles For Days: This perk will reduce the amount of energy that your player will lose when performing dribble moves.

2) HOF Quick First Step: This badge will provide your player with more explosive first steps out of triple threat and size-ups.

3) HOF Tight Handles: This badge will improve your players’ ability to break down their defender.

4) Silver Unpluckable: This badge will reduce the chances of getting stripped by a defender. An incredibly useful badge for a playmaker that is both looking to break up the court or open up chances for teammates.

5) Bronze Bail Out: This badge will increase the chances of successfully completing a pass from mid-air.

6) HOF Dimer: This badge will boost the players’ shot percentage for open teammates on jump shots after catching a pass.

7) HOF Space Creator: This badge will improve your players’ ability to create space from a defender. Again, very useful when it comes to closing in on your opponents half.

1) Gold Clamps: This perk will boost the ability to stay in front of the ball handler on the perimeter.

2) Gold Intimidator: This badge will allow your player to intimidate offensive players and cause them to miss shots a lot more often. Overall, a great defensive badge.

3) Silver Rebound Chaser: This badge will improve your players’ ability to chase down rebounds. This perk will work extremely well with the ‘Catch & Shoot’ badge from above.

4) Silver Post Move Lockdown: This badge will improve your players’ ability to defend even the most effective post moves significantly better. This includes pretty much all kinds of skills around and near the rim like post hooks.

This leaves us with 8 Hall Of Fame Badges, 3 Gold Badges, 5 Silver Badges, and 2 Bronze Badges.

That is it. We are finished. Now, it’s time for you to implement this build into your own game if you haven’t already and start to absolutely dominate the court in NBA2K21 with your stretch playmaking superstar player.