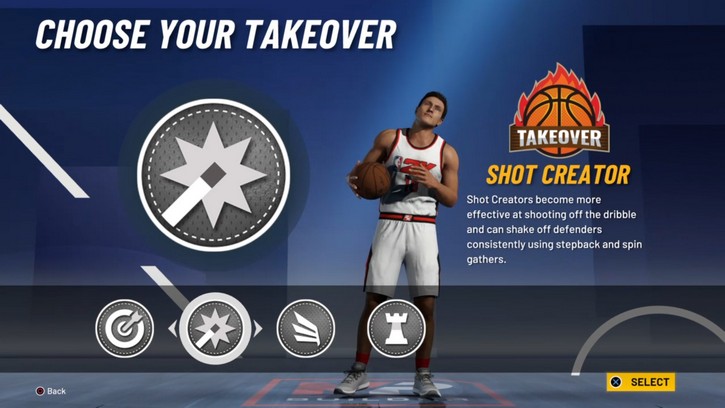 Takeovers are one of the craziest addition to the 2K series in terms of realism. It gives a crazy boost to all your player’s stat. There are a total of 8 Takeovers in the game. The options will vary and will depend on your position or your build. This guide will talk about all the details involved in choosing the best takeovers in NBA 2K21.

The Slashing Takeover’s stat increases are kind of awkward because the Acceleration and Speed With ball stat are both at a 0 rating increase. These are both crucial for perimeter plays to slash their way to the paint. There might be some balancing issues that make this overpowered especially with badges like Quick First Step and Fancy Footwork.

The Spot Up Shooter Takeover is quite straightforward. It gives the +10 rating boost to the Mid Range and the Three Point Shot. It is overall a great option for shooters and it works well with catching and shooting including the badge. There are multiple badges that can compliment this Takeover efficiently. The Corner Specialist Badge will add even more bonus to your corner shots including mid range shots in the corner.

You can absolutely become broken when the Spot Up Shooter Takeover is active and you have this as a golden badge. Green Machine, Hot Start and Hot Zone Hunter will also compliment the Takeover well and improves overall consistency with your shots when you knock them down.

The Shot Creator Takeover is a mix of both the Playmaking Takeover and Sharp Shooting Takeover. It gives improved offensive consistency and improves overall skills as a combo guard. This Takeover is a bit lackluster and you are better off choosing a more specific Takeover instead of an overall boost.

The Post Scoring Takeover is absolutely broken for an offensive big man. Combine this with the Backdown Punisher and Deep Hooks badges and you are an unstoppable force in the low post and in the paint. The problem is getting your meters up to activate the Takeover because it is so easy to double team players who are backing down in the post especially when you are on fire.

The Rim Protector Takeover is simple and it only increases your Block and Interior Defense by 10 ratings. It also increases your Close Shot by 10 to compensate the lack of buffs but this is the one of the more concentrated aspects of the game. I would have preferred to add additional Vertical or Defensive Consistency but adding 10 ratings to Block is already insanely good.

Contrary to it its name, the Lockdown Defending Takeover is not an all-around defending Takeover but it focuses on your perimeter defense and improves physical stats like Lateral Quickness, Speed, Acceleration and Strength. These are all specifically for guards and forwards who are defending the perimeter to prevent easy penetration to the paint.

The Rebounding Takeover is technically not a defensive one because rebounding is a big part in both the offensive and defensive side of things. I put it on defensive because I believe that it has more value there even with the +10 rating to the Close Shot stat. The increase in Vertical by 10 will increase your ability to block shots and choosing this Takeover will most likely mean that you are using a big man build and playing either a Power Forward or a Center.

All these Takeovers are usable in a way. It depends on your character build, your team and what game mode you are playing. Playing in the Neighborhood is definitely different from just playing MyCareer and finishing your stint as an NBA player. Choose the one that defines your player and your specific role to your team.