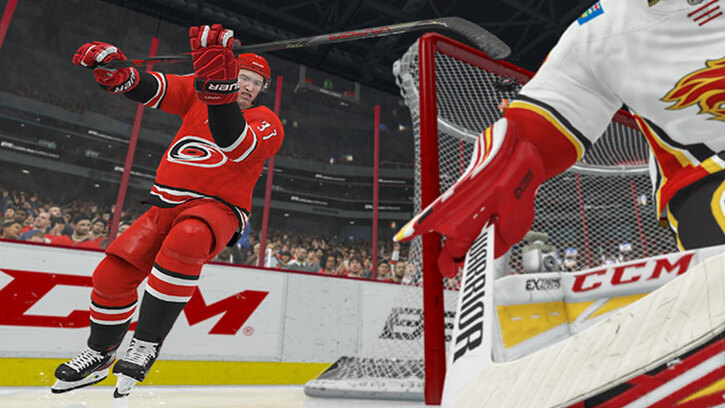 Illegal challenges from an opposing player are inevitable scenarios that you and your team must be prepared for. Luckily, just like in any sport, such behavior is penalized by the referee, which will then give you the opportunity to increase your lead in the game with little resistance from the opposing team.

So, if you are a victim of illegal challenges and want to make the most of such goal-scoring opportunities, continue reading as in this article, I will teach you how to score on breakaways in NHL 21.

Note: Whether you are a complete beginner to NHL or are a seasoned player that is looking for something that you may have missed, this article is perfectly suited for both parties.

What Is a Breakaway?

A breakaway is a moment in NHL 21 in which your pro player has been granted the chance to free-skate and shoot at will at the opponent’s goal. The only exception is that this time, there will be no defenders in the way and only the goalkeeper that will try to defend against the on-coming player. Essentially, it is a 1v1.

Such a situation is granted when a player’s progression towards the opposing goal has been illegally impeded by an opponent or if the goalie throws his stick at the oncoming player in an attempt to stop them. Then, the breakaway player will be awarded a penalty shot.

While a breakaway is supposed to be the easiest goal-scoring opportunity that you can get in NHL 21, it is surprisingly difficult to convert. Perhaps not so much because of how big the goalkeeper is as compared to the goal but because in such “free to score” situations, we often overestimate our abilities and end up throwing away the opportunity to score an easy goal.

So, to prevent this from happening, I will show you the best ways to score breakaways on NHL 21 and never miss such a chance ever again.

Ever since Pavel Datsyuk scored this amazing flip goal against the Blackhawks in 2010, “the Datsyuk flip” has become a signature move that has been utilized by many on breakaways in NHL 21.

If you have played NHL before, you can easily see why, however, in NHL 21 more than ever, this way of scoring on breakaways is an absolute must. Much of the community has confirmed that it is perhaps the most efficient way of scoring goals in NHL 21, which is the reason I am adding it to the list today.

To score the Datsyuk flip, all you really need to do is measure the distance of the puck to the goal and position your player at an angle (coming in from either side) before you execute the flip.

As you begin to skate towards the goal, once in close proximity to the goalkeeper, move the right analog stick (on PlayStation or Xbox) down to 6 o’clock and hold. Then, once you are at the exact angle, click R1 for PS or RB for Xbox to flick the puck over the keeper.

Tip: While this goal is pretty easy to score, timing it perfectly is where you will probably struggle the most. So, be sure to go into the practice arena and practice it there before you attempt it in real games where such opportunities matter the most.

The Kucherov deke is one of the new fun NHL finishing moves that you can use to fake out human opponents that are controlling the goalie. It is the signature move of Nikita Kucherov. This particular deke can be executed with both left and right-handed players. I would recommend you to get one of the best deking players in NHL 21 before you attempt this move.

Tip: Make sure that you swing from the left side to the right to get the puck within the perimeter of the net.

Tip: Make sure that you swing from the right side to the left so that you can get the puck within the perimeter of the goal.

Note: The only downside to this truly humiliating finishing move is that it hardly works on AI goalkeepers as they react based on what is going on within the game rather than react based on experience and logic like humans do.

Want to score your breakaways in a fine fashion? Then you should definitely try the Svechnikov classic which is also known as the Lacrosse or the Michigan deke. This particular finishing move is amongst the hardest NHL 21 dekes that you could possibly attempt. The reason being is that you really need to time it just right or else, either you will be too early and hit the side of the net or the goalkeeper will be able to save it. Besides, you also need to get the puck in the right spot depending on the side that you are trying to perform the move from.

Let’s take a look at how to do the Lacrosse/Michigan in NHL 21.

For a left-handed player, you will need to move the puck to the forehand side by pushing the right analog stick to the left. Then, press L1 on PS or LB on Xbox. After that, press the right stick in. And finally, move the right stick counter clockwise for half a circle.

If you have performed everything from above correctly, you should score in a really beautiful way.

Tip: I would recommend that you go to the practice arena and try it there a few times until you master it. Otherwise, you will be throwing too many opportunities away if you try to learn it in an actual game.

There are multiple other dekes that you can attempt, but having played NHL 21 for some time, I could confidently say that if you are looking to score easy goals that also look really nice, the ones that I listed above are the dekes you should attempt in real games. But, before that, go and practice them in the practice arena.