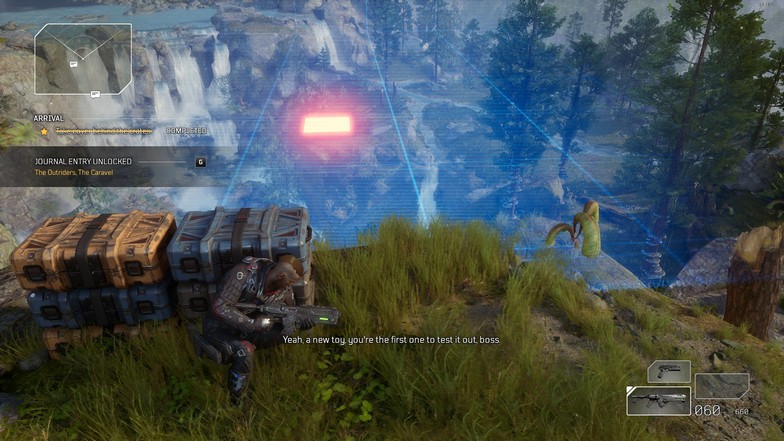 Using covers and peeking is a good combat technique to use in Outriders. Dodging is the next best thing but requires good timing to evade most of the damage. Covering just feels safer and is simpler to use.

The movement feels smooth and reminds me of the good old Gears of War days. This guide will teach you how to cover and peek in Outriders and other mechanics involved with it.

How to Use Covers

Since the game is based on other planets and most are open areas, you will be taking cover on ledges, cliffs, and objects. During most encounters like quests or the main storyline, there will usually be boxes or objects you can take cover on. You just need to go near them and press “Space”.

If you are too far, there are cases where it does not trigger the movement to the cover. There are not any indicators or bubbles that show up when it is possible to use a cover. On the bright side, it shows up when you want to switch to another cover.

The “Space” button indicator will show up if you aim at another cover that is near enough to switch to. If it is not possible, you can roll out by dodge rolling towards another cover.

While in cover, you can swap your weapon by pressing and holding “Q” and you can right-click and aim as usual to peek out of the cover.

Generally, all classes can use it but Pyromancers benefit most from it since all their skills boost their weapon damage and they deal damage from afar. Most of the boost they get is increased damage from shooting and you will mostly be using covers while there are a ton of ranged enemies shooting. If you are playing coop, you will not be covering that much.

The controls for the game are not the best but it also not clunky. Taking cover is generally the best strategy to reduce incoming damage since healing in the game is a bit hard.