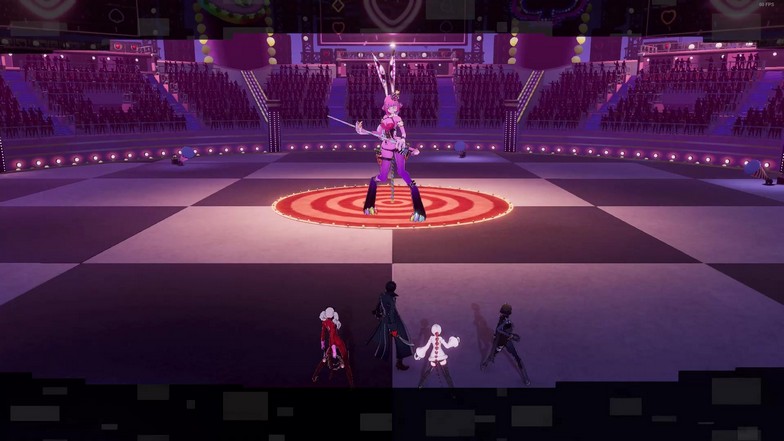 Alice Hiiragi is the first major character and boss that you will meet in Persona 5 Strikers. She is a fashion artist/singer and is your typical idol in Japan. Alice Hiiragi will end up being your first target after careful investigation because of her unnatural rise in popularity.

This guide will focus more on teaching you how to beat Alice Hiiragi in Persona 5 Strikers while giving you short tips on exploring Shibuya Jail.

The first boss in Persona 5 Strikers is difficult but only if you did not level the right character and skipped through a ton of mobs while progressing in Shibuya Jail. She is weak to fire so Ann Takamaki and a Persona with another fire skill on Joker will be the best strategy.

It does not really matter if you have characters that have their elements nullified by that boss but it will help if you swap them out. As long as you have 2 characters (Joker and another character) that can weaken the boss, you can defeat any boss at least on normal and hard difficulty.

Exploring through the jail is pretty straightforward, just follow the objectives and if you get lost, remember to use your Third Eye ability. If there are no interactable objects in sight and the objective did not circle back to where you came from, it is most likely near you and the correct path should be accessed by jumping and climbing onto platforms.

You can learn more about useful tips and tricks for exploring in our beginner guide.

Alice Hiiragi is weak to fire and wind which makes Morgana and Ann the best duo for your party composition. If you can just spam your entire SP gauge using Agi and Garu while alternating attacks in-between spell casts, you can maximize your damage output while staggering Alice Hiiragi as often as possible.

Haru’s Persona affinity will be useless for this fight but if you still her on your team for personal reasons, you can still make it work. Personally, I prefer to put my favorite character (Makoto) throughout my playthrough and take on the challenge if ever they are immune to nuclear.

During the fight, you will see 4 interactable crackers circled around the arena. It will stagger Alice once hit and you can perform follow-ups instantly to get more attacks in. The crackers have a huge radius and should hit Alice even if her position is directly on the left or right of the cracker’s position.

You should save one cracker when Alice goes to the middle of the arena and use the pole for a spinning attack. While that attack is not that dangerous, it is still incredibly annoying since you will not be able to hit her during that time. Using the cracker will instantly stop it and you can do some more follow-up attacks right after.

Alice’s skills in phase 1 are incredibly slow, and with her being such a big target, it is easy to spot when she is about to cast something. Just dodge every skill you see and minimize as much damage as you can. On higher difficulties, this fight will take much longer than usual.

The hardest attacks to dodge are her normal attacks or swipes. With so much movement going on, it is hard to keep track of her arm movements and her normal attacks are quite fast but not as deadly as her skills. This becomes harder when she enters phase 2 and goes on four legs.

She becomes much faster and this is the point where you will want to spam as much Agi and Garu as possible. Utilize all the remaining crackers when she recovers and you should burst her down under a minute during her phase 2.

Alice Hiiragi is the easiest boss in the game but it can get difficult if you are somehow underleveled at this stage of the game. She staggers really easily making this fight a breeze and you can have any party composition since she is only immune to Psychokinesis skills without having any strengths on other affinities.