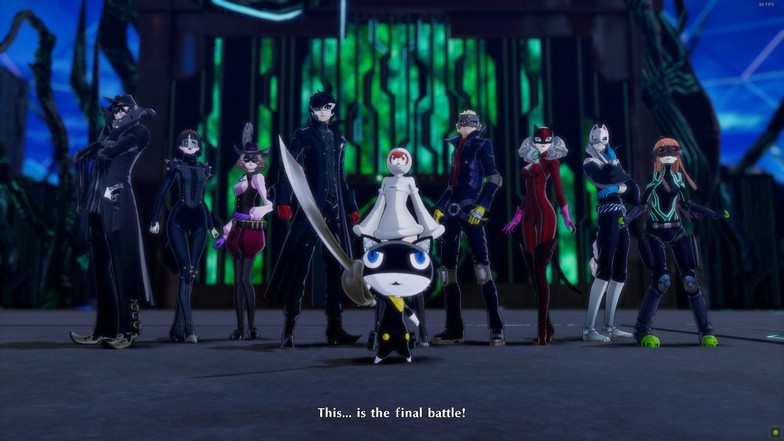 False God Demiurge is the final battle in Persona 5 Strikers. The boss has a long history in the Persona series and has shown up in all 3 of Persona 5’s games and other Shin Megami Tensei games. The battle will be the biggest challenge and a fitting last boss for the Phantom Thieves. This guide will show you how to beat False God Demiurge in Persona 5 Strikers. The guide will include the path leading to the boss and the confusing Misty Path.

Before getting to False God Demiurge, there are a lot of events that take place and it will start with EMMA taking control of everyone’s desire. You will end up in the Abyss Jail in Tokyo and investigate what has been happening. This leads to finding out that Kuon Ichinose was behind this. She has been helping EMMA all along since she believes that leaving the control of the people to an AI will bring the advancement of humankind.

You will also find out that she was the one that sent Sophia down in the Shibuya Jail in the first place. This leads to Kuon Ichinose’s story of her trauma in the past. You will end up fighting Sophia because Ichinose was the one that created her but Sophia fights back after learning about the heart from being with the Phantom Thieves.

After progressing through the story, you will end up exploring the jail and finding Sophia unconscious after the scene. Go through the abyss normally as you would in a normal jail. You will end up seeing Ichinose again in the same place and you will fight enemies that she would spawn. The battle is easy and you will just have to go through a ton of enemies including a mini-boss.

After the fight, you will learn more about Ichinose and what led her to become what she is now. Like all of the bosses, the gravity of Ichinose’s action is not that severe considering she had no part in manipulating the previous targets. Although, she is at fault for knowing about it and helping EMMA.

How to escape the Misty Path

After going through the jail again, you will fight another horde of mobs that will lead you to EMMA. After hacking the servers with Ichinose and Futaba, you will enter the Misty Path leading to EMMA but it might be confusing. The correct path will not be the objective marker and you will hear Sophia saying that you are going around in circles.

The correct path must be different. This means that you will choose any of the paths that are not on the map but you have to run through it longer than usual until you go through. Go to the 3:09 mark in the video above.

After going through the Misty Path, EMMA will be there but to trigger it, you will need to send a calling card to all the ones disrupted and controlled by EMMA.

For the last boss fight against False God Demiurge, this will be an excruciatingly long fight and there will be phases where you will be able to use all your characters together. This is because the boss’s crystals or orbs keep it alive so you will need to split the Phantom Thieves into 3 groups.

While starting the fight, you will notice that False God Demiurge keeps healing itself to full and after going through around 2-3 refreshes, this will prompt your team to split up and go for the orbs. You will end up making 3 groups at this time assigning each character to a group.

Group A – elements that are strong on this platform are Nuke, Ice, Wind, Gun, and Fire.

I suggest using Makoto, Morgana, and Ann for this platform. You do not need to bring everyone strong because the strategy will always be breaking one of the shields and performing an all-out attack. This all-out attack will also damage nearby orbs so be efficient with what you have. Once you bring down a few orbs, there is less incoming damage that goes out.

Since Morgana and Ann are mostly support characters, you can go unload their gun ammo at the start while saving Makoto to deal with the others.

Group B – elements that are strong Lightning, Psy, and Bless

The second platform is a bit harder but like the first platform, you can just go for 2-3 orb’s weaknesses and cleave them down with all-out attacks. Since Bless is strong against the main boss, I suggest bringing Yusuke, Ryuji, and Haru. You will need Sophia’s healing against the main boss so it would be a bad idea to bring her here.

Since Yusuke and Ryuji are strong characters, they can easily deal with the orbs without any weaknesses from your party composition. Focus on those orbs that are weak to Lightning (Ryuji) and Psy (Haru) first and beat the other orbs normally.

The Demiurge’s weaknesses are Death and Bless damage. The best party composition for this will be Joker, Sophia, and Zenkichi (surprisingly, the main character and the new ones). Do not try to unload all your SP at the start since you know it will heal until you defeat all the orbs.

Zenkichi does Almighty damage and it has no strengths and weaknesses. The reason why he is in this group instead of the second platform is because of his Wolf’s Fang combo which is the strongest combo for this fight. This requires Master Arts level 4 and you should have all your Master Arts at level 4 at this point anyway.

When False God Demiurge pulls back, Zenkichi can still hit him with his Wolf’s Fang combo of S + S + S + T (spam repeatedly). This will be dangerous as it drains Zenkichi’s HP by a ton. Hopefully, Sophia can keep up healing him as she is the best healer in the game.

With Sophia leveled up, she has two passives that can stack together which increases Bless damage and she also has a healing boost passive. She will be the most efficient character so use all your SP consumable items on her during this time.

Alternate between Joker, Sophia, and Zenkichi as often as possible if you know you will be running out of SP soon. This will increase your Showtime gauge and that is a ton of extra damage you can utilize.

Make sure to have everyone equipped with the latest tier of weapons and armor. This cannot be stressed enough since you will be using everyone (except Futaba) in this fight.

Cook everything and spend all your money on consumables as this is the last fight in the game. Sell all your old weapons and armor if you are low on money.

Magic damage increases are good for this fight since you will be casting most of the time against the boss. It will be quite dangerous to hit him just because of the camera angle.

When you see the laser beam attack, you can just spam the dodge button and evade every single frame. This does not save your other characters though if you check around the 23-minute mark on the video. It is best to use the wire and switch platforms especially if you have no revive spells or items up.

When you see the boss attack by spawning multiple black orbs, they go through the whole platform in a straight line but not all at the same time. If you pull back, you will be able to see which ones are pushing out first and zigzag your way through the boss again.

This is Persona 5 Strikers’ biggest challenge and the lead up to it was exceptional. With the lack of content the game suffered compared to a usual role-playing game, they were able to invest more in the story by offering more cinematic cutscenes. This is the first time the Persona series ever made a game with the same set of characters in the same game. It is truly Persona 5’s true sequel and this game is a must-play for all Persona fans.