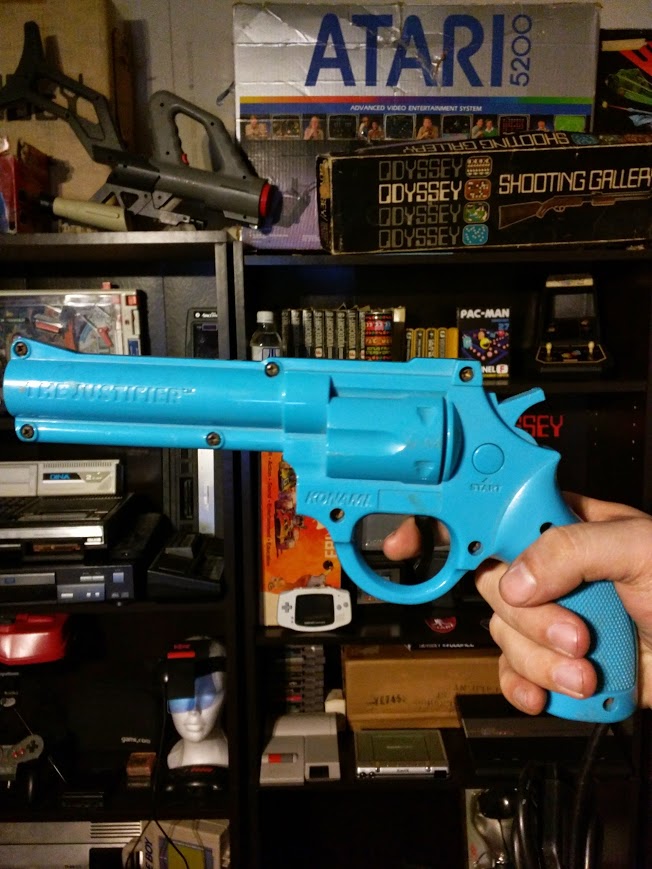 Everyone remembers the first time they saw an arcade machine with a Gun and thought ‘dammn’.

For me, that first moment of ‘I must play this shooting game for the rest of my life’ amazement, was the arcade version of Operation Wolf. Sure there had been guns before this, but this was a machine gun with a button on the side for grenades. This was some next level stuff for a prepubescent kid, and I was hooked. Following that moment, where arcade machines were still an experience that home consoles couldn’t match there was always the thought that one day I’ll have a gun for my console. One day.

Well that day eventually came and for me it was with my very first Sega Master System that came with a built-in shooter called Safari Hunt. That bloody armadillo always bested me!!

Well gaming guns were no new thing by the time Sega’s version came around in the mid to late eighties, but just how far back had the giants of their generations been experimenting and trying to bring that experience into our homes? With that thought, let’s have a little look at the history and progress of the beauty that is the gaming gun.

The Magnavox Odyssey is the first home console that came sporting a light gun. The Electronic Rifle launched alongside arguably the best retro gaming console in a ‘shooting gallery’ pack in 1972, before my existence was even imagined. The Shooting Gallery game overlay contained rows of targets, and you had to shoot the computer-controlled dot with the light gun as it moved over them. The pack contained four games and two additional game cards, but the Odyssey also came with board game accessories like dice and play money. This might be the only retro gaming gun that you had to cock before firing it, and you needed a second player to move the target for you. 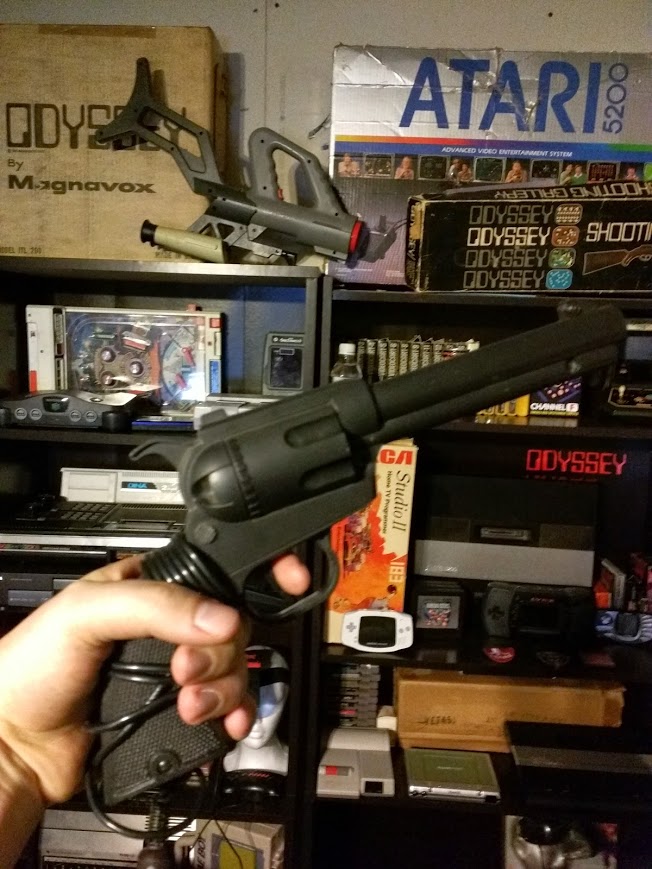 The first home console gaming gun that you could hold in the mirror and use to act out a scene from Dirty Harry. This beast looked legit.

The TV Scoreboard was Radio Shack’s entry to the first generation of consoles, dating back to 1976 and came with 6 built in games. While the gaming gun was popular with first generation machines, they were not to be seen again until the third generation – the likes of the Master System and NES. This might be why my fingers tingled so much with excitement. At the time they were new to me, as the generation that preceded my start into consoles had no development in gaming guns. 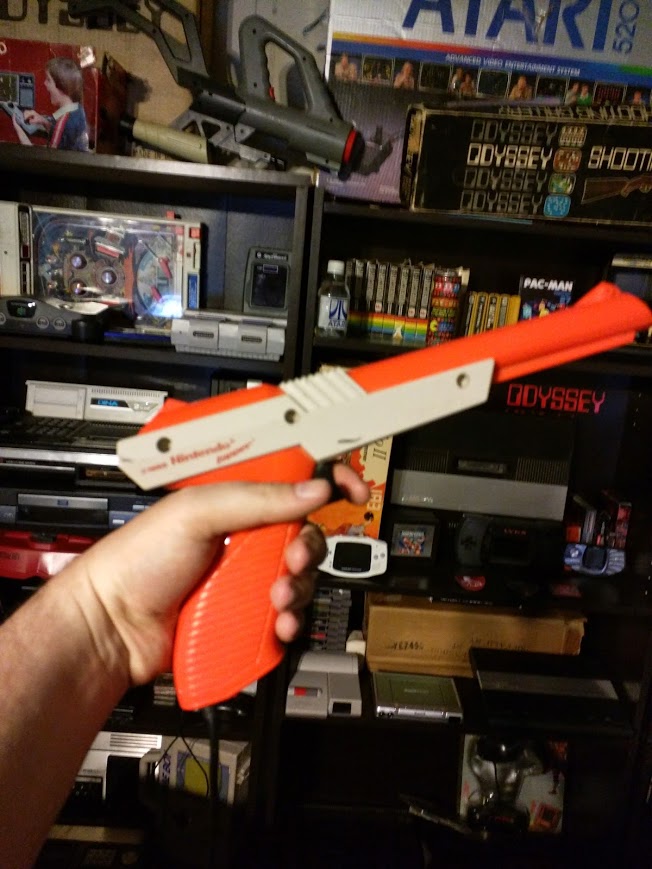 In 1985 Nintendo resurrected interest in the gaming gun and released the Zapper. Coming in either Orange with Off-White, or Gray, this is the first generation of gun that most people remember enjoying across a lot of different games. Nintendo integrated interest in the gun through their animation Captain N – The Game Master. Every kid with a Zapper wanted to be that guy. 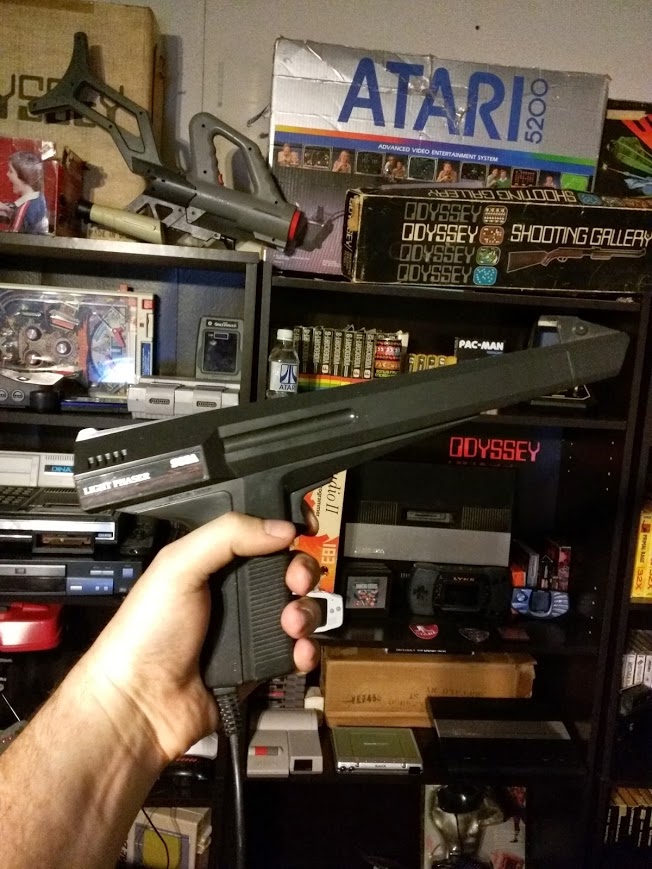 Here it is, the gun I remember the most. Did I say gun? Sorry, I meant Light Phaser, in all its infra-red goodness. The countless hours shooting harmless bests in Safari Hunt, putting my hand over the front of the gun when it was my friends shot to make them miss…I was naughty. This was Sega’s answer to the Nintendo Zapper, and came out in 1986, though it would be a couple years after that before I got my hands on it. 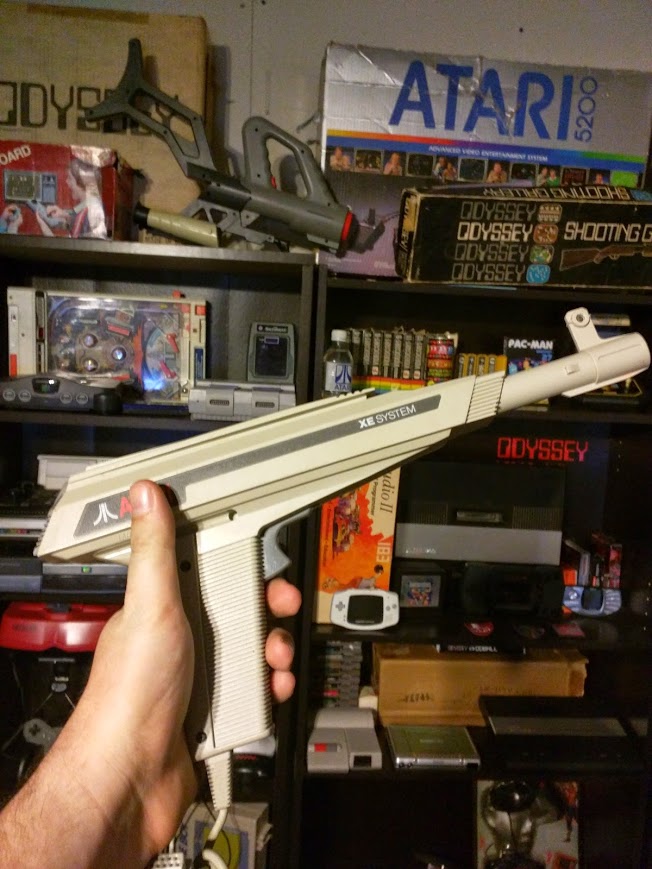 Atari, for one of the early gaming giants where quite slow to the table for a gaming gun. The XG-1 released with the Atari XE was nothing to shout about really when it was released in 1987. The console/computer hybrid itself was only 8-bit and they already had the 7800 8-bit console out on the market. It was a strange decision, but then Atari had a few of those. There were a few games released for the 7800 and one for the 2600 that required this gun (Although the 2600 was technically a second gen console the game was not released until well into the third gen era) but the gun itself was very poor. It also looked rather like a rip off of the Sega Light Phaser. In 1987 Wolds Of Wonder released their entry to the console arena with the ActionMax. Marketed as ‘the first real action game system’ this was a light gun only console that worked with VHS tapes. It doesn’t really feel right calling this a console. It needed a VHS player to play the tapes, and all the console did really was count the number of correct hits on the screen – the image remained the same on the screen whatever the outcome. It was after all just a pre-recorded video. 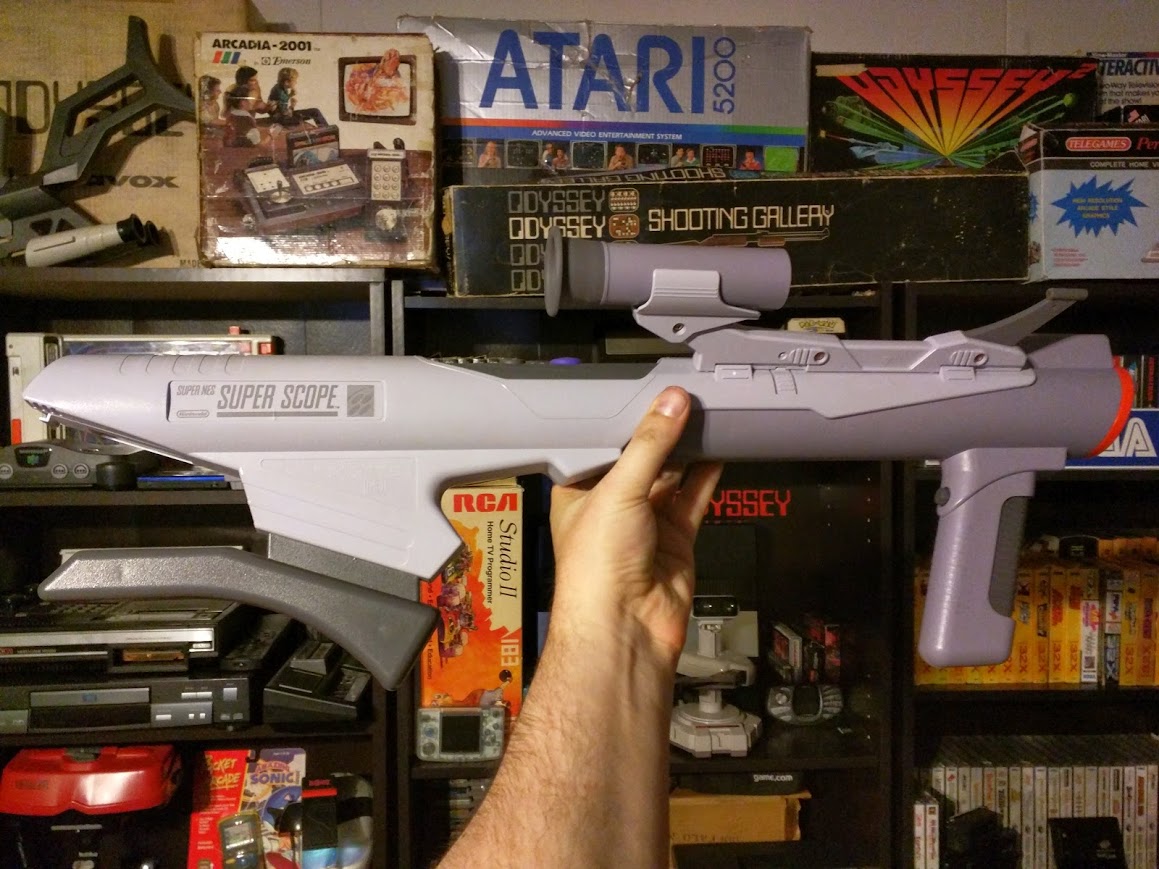 What’s that you say? A gaming gun with a shoulder rest and scope? You better believe it!! This was Nintendo’s release for the SNES in 1992. The first gun Nintendo released that had infra-red tracking between gun and screen. No more pulling the trigger relentlessly to register an accurate response. This thing was a beast. Not to be outdone, Sega’s answer to Nintendo’s Super Scope was the Menacer, also released in 1992. It came with a double scope that looked a bit like mini binoculars, but meant to allow either right or left handed shooters the benefit of the scope. How many people got confused and tried to use both eyes on the scope? lol

The gun could be used in a variety of configurations, the scope, shoulder rest and gun core were all detachable but despite this, the gun was not well supported.

Was this the first cross platform gaming gun? Konami’s entry to the gaming gun world released in 1993 was made for the SNES, Sega Genesis and the PlayStation. I remember countless hours playing Die Hard Trilogy on the PSX with this bad boy, dishing out justice left, right and centre. You could even link a second gun up to the first for some multiplayer action. Instant winner. 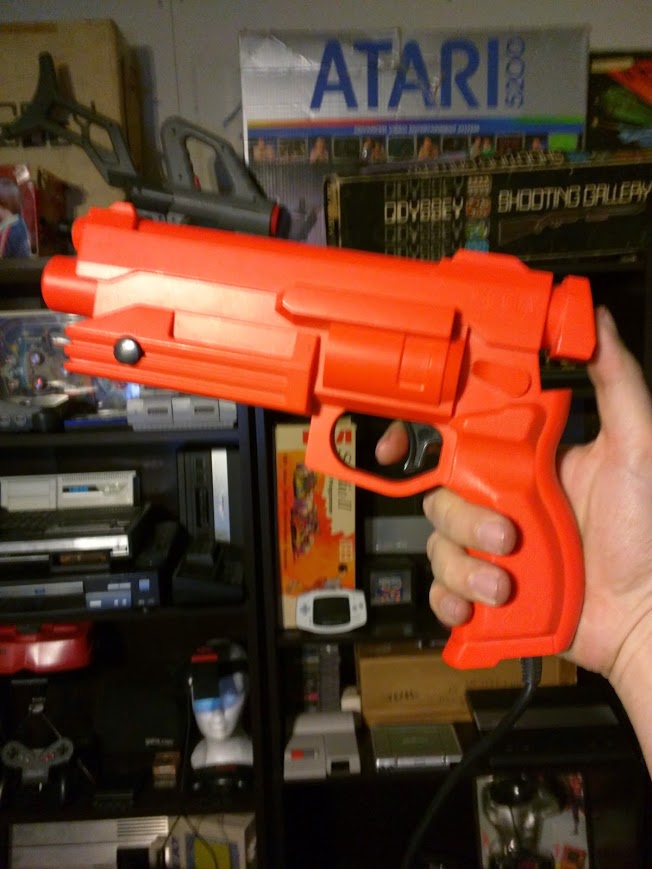 For many, the Virtua Gun released for the Sega Saturn in 1995 was a firm favourite. It was weighty, didn’t feel cheap and had a great trigger response time. This was when gaming guns started to peak. 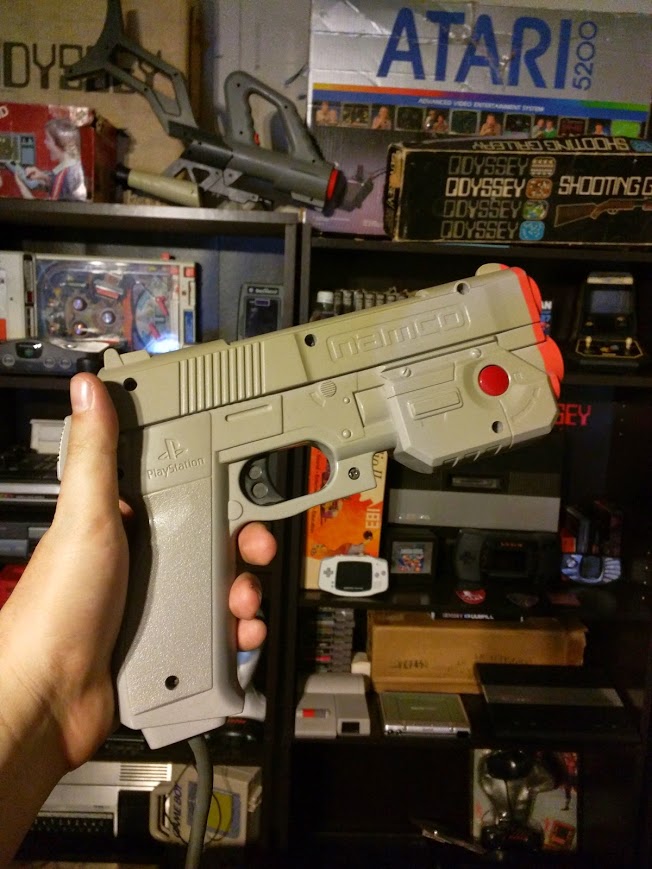 GunCon was Namco’s answer to the Konami Justifier. Released for the PlayStation in 1995 if you were playing Time Crisis you were probably using one of these rather than the Justifier.

That’s us up to the end of the fifth generation. Beyond that we are looking at PS2, Xbox, Dreamcast and GameCube. Although we are into the 8th generation now, the 6th is really post-modern rather than retro so we will stop here. How many of these guns do you remember, and what was your favourite game? I hope we’ve managed to encourage a bit of nostalgia, and on that note I’m away to find my Die Hard Trillogy and Justifier. Yippy Ki Yay!!