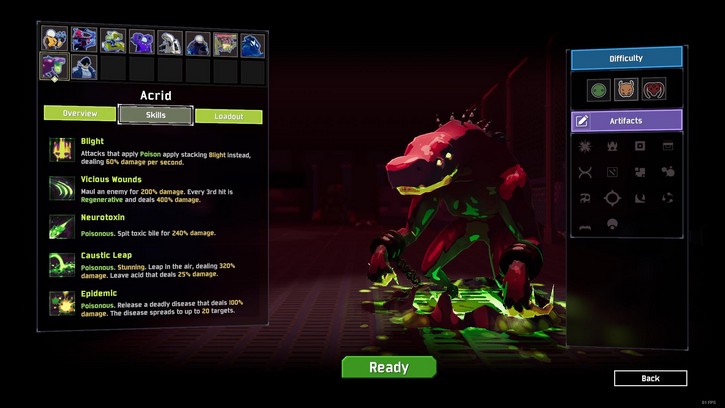 Acrid is a melee survivor that uses poisons to damage foes. His poison spreads easily and causes a consistent damage through a unique poison debuff. Acrid is one of the best boss killers in the game and this guide will show you the builds you can use to maximize his skills which will help learn how to unlock all skills for Acrid in just one run.

Acrid Best Builds to Use

Acrid is a unique survivor because of his poisons. He does not have a great build with his primary and he has less spammable abilities compared to the other survivors. He focuses more on setting debuffs to a single enemy and spread it naturally which will melt enemies especially larger foes with tons of HP.

This build relies on the Death Mark item to destroy all the enemies. Debuff is the key factor and you need to apply them until Death Mark activates. You will apply debuffs as much as possible with the bleed from Tri-Tip Dagger, the burn from the Gasoline kills, the slow from the Chronobauble, the Vulnerable from Shattering Justice and the innate poison from all of Acrid’s skills. Attack speed does not work with the poison ticks and it is not recommended to add the Predatory Instincts, Lens-Maker’s Glasses and Soldier’s Syringe item combinations.

The playstyle you should do is to keep kiting and debuffing enemies every time your skills are on cooldown. Use Caustic Leap to avoid enemies and rarely used for offensive purposes. This means that items that reduce cooldown and add charges will be highly beneficial to your build too. Added a few Backup Magazines, Bandoliers and Alien Heads for reduced cooldowns and added charges.

Brainstalks will also be good when you have enough Old Guillotines to complement it. It reduces your skills by 4 seconds every time you kill an elite. Added mobility and survivability like Tougher Times, Aegis, Paul’s Goat Hoof and a single Wax Quail. This will let you evade and even get to enemies faster to debuff more enemies in the stage faster.

This item combination scales great especially with the Focused Crystal. Once you start bulking up a bit, you can go within 10-15m of the enemies you stack your debuffs to and have the Focused Crystal melt them to shreds. Lens-Maker’s Glasses will help increase the damage tick of poisons and overall damage output of Acrid.

This build relies on raw damage from your poison instead of relying on item triggers like the Death Mark where there is a condition to be met to melt your foes. This can be combined with the first build and should scale your damage output even more. In my opinion, the debuff build will be better but this one will be easier to replicate because there are only a few items you need but you need to stack them at a high amount to be more effective.

Armor Piercing Round will shred teleporter bosses and basically make them like normal fodder. You need to build on your survivability as you will be focusing on activating the Focused Crystal buff by being near the enemies. Aegis, Tougher Times and maybe a Harvester’s Scythe will keep you topped up at all times. A Hardlight Afterburner will help you hop around enemies better and reduce the cooldown of your utility.

How to Unlock Blight

To unlock the Blight skill, you need to complete the “Acrid: Easy Prey” achievement. Completing the achievement will require you to land a killing blow on 50 total enemies that have 1 HP left. This is might seem difficult but Acrid’s poisons are perfect for this. His poisons can never kill enemies with the debuff and will just reduce them as far as 1 HP.

Refrain from using skills that have a base damage like Vicious Wounds, Neurotoxin and Caustic Leap. Even if some of these can cause poison, it might kill some of the enemies before they get reduced to 1 HP with your poisons. Building Crowbars is also bad for doing this achievement and you might get a few of these if you are not playing with the Artifact of Command active in the game. Crowbars are not really that good for Acrid in the first place.

Try to this achievement when you as early as you can because the progress stacks through the stages. This is what makes it easy as well as his other skill unlocks. Focus on building your build of choice and play normally. These achievements are basically just a guide in teaching you how Acrid works which is true for most survivor challenges or achievements.

How to Unlock Ravenous Bite

To unlock the Ravenous Bite alternate skill, you will need to complete the “Acrid: Bad Medicine” achievement. This achievement is completed by landing a killing blow on a Scavenger. The Scavenger is a rare mob in the game that spawns a ton of common items from a knapsack. You have to open it after killing the Scavenger to get the items so do not forget to open it before advancing through the teleporting or the next level.

The Scavenger will spawn more frequently at the 10th stage mark and as you progress, there will be more chances at them spawning. This is a great way to get a power spike when playing solo because of the amount of items it drops especially when you are playing with the Artifact of Command.

To kill the Scavenger, just focus on stacking your poisons with your build. This is easy because Acrid specializes in taking down big monsters with high HP. There is not much threat from the Scavenger but it can be quite beefy to deal with so focus on the other monsters and just keep stacking poisons. Being this high up in the stage will mean that there will be dangerous elites to deal with.

How to Unlock Frenzied Leap

To unlock the Frenzied Leap alternate skill, you need to finish the “Acrid: Pandemic” achievement. The achievement is completed by inflicting poison 1000 total times. The key word here is “total” where you can complete this achievement just by playing and it stacks through multiple playthroughs.

Just play the game long enough with multiple playthroughs as Acrid and you will complete this achievement eventually. If you are like me, who likes things done a certain way, I like to finish achievements for survivors in a single run. This is completely possible and should be completed at around stage 15 and above which depends on how long you stay on each stage.

Focus on your build and add items like Tougher Times and Paul’s Goat Hoof every now and then to increase your survivability. Mobility increases survivability in general and considering how Acrid is already tanky as a melee survivor, it is more efficient for him to build speed. This will help you through the higher stages when you start spreading poison and kite all the time.

Overall, Acrid is a fun survivor to play around with but has the weakness of mobility as a melee survivor which can reduce the pace of your playstyle until the late stages. His abilities are extremely easy to unlock because there is not any technical challenges to overcome. You might even unlock all these skills without reading them and just keep playing the survivor. Hopefully, this guide helped you complete all your achievements in one run and give you an idea how Acrid works and where his strengths are.