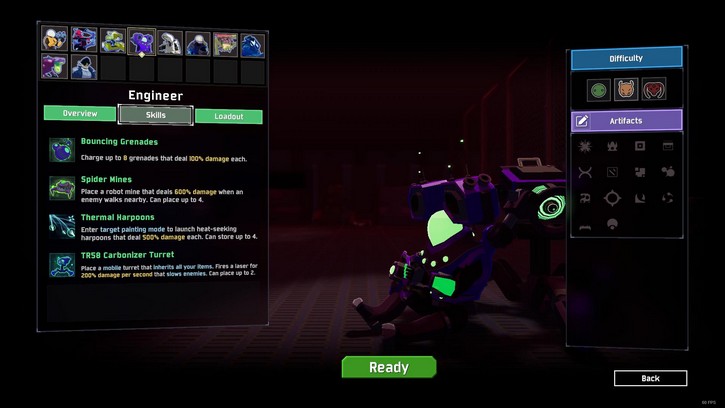 The Engineer survivor is the best support in Risk of Rain 2. The way his turrets mimic the items of the Engineer adds infinite potential for builds and support builds are quite rare in this game but the Engineer is the only one that can pull it off perfectly. This guide will show you all the builds you can use to unlock all the skills for Engineer.

Engineer Best Builds to Use

Engineer’s skill set looks good on paper as a damage dealer because of how his turrets uses the same items the Engineer has. Most people overlook his ability to support teammates with unique item combination that only this survivor can do because of his TR12 Gauss Auto-Turret and Bubble Shield.

These item combination or build are purely support items and brings enough sustain for everyone in the party. This build only works with the TR12 Gauss Auto-Turret because you need a turret that is stationary to activate the Bustling Fungus. Combine this with enough Bubble Shields and you will make your whole party virtually impossible to kill.

Grabbing a few Bandoliers or an Alien Head can reduce the downtime of your Bubble Shield to practically 0. It is not good to add Hardlight Afterburners for more charges because only one Bubble Shield can be active at a time. Although it can still help because it reduces the cooldown of your utility aside from giving it charges.

Adding a few on-hit items as support can help the party with more utility like adding stuns or slows with Stun Grenades and Chronobauble. The Lunar item “Corpsebloom” can double your healing output but in return, lower your burst healing. It can be a good item if players in your party have Aegis. After you have completed the build with enough sustain items, you can sprinkle a bit of damage for your turrets with the builds below.

This is the build you would have to go for to complete the “Engineer: 100% Calculated” achievement. Cap your Lens-Maker’s Glasses to 10 which will give you 100% critical rate. Predatory Instincts and Soldier’s Syringe can both stack attack speed and works well with each other. Once you stack enough of these items for attack speed, your turrets will erase anything they have a line of sight to.

The Armor-Piercing Rounds will help you finish bosses quicker and has the highest damage multiplication with the caveat of only working on bosses. 5 of these should be enough depending on the stage you are in. Later stages will require you to focus more on elite monsters and you would need to stack Old Guillotines and maybe Focused Crystals for them.

This equipment build can be used by any survivor but it works well with Engineer because of his playstyle. Engineer’s playstyle is mostly relying on turrets to do the damage while you avoid taking damage. This equipment adds an additional 3 Turret like damage dealers depending on the on-kill effect items you currently have.

You will need to stack a some Fuel Cells to decrease the cooldown of your equipment and add additional charges to it. Soulbound Catalyst will help you in the later stages to permanently keep your charges up at all times because its effect will also trigger with Forgive Me Please. You can only have 3 active dolls (Forgive Me Please) at a time and it works like a turret where the last doll gets replaced when you drop your 4th doll.

There are not many on-kill items to stack other than Legendary items so you will need to open Newt Altars and purchase some in the Bazaar Between Time. Forgive Me Please triggers 1 on-kill effect every second and lasts for 8 seconds. You should focus on getting Ceremonial Daggers, Resonance Disc and Happiest Mask for damage. You can add Ghor’s Tome to get you some “passive” income and buy chests on the stage quicker.

How to Unlock Spider Mines

To unlock the Spider Mines skill, you must finish the achievement “Engineer: 100% Calculated” first. It is completed by defeating the teleporter boss in less than 5 seconds after it spawns. This should be a piece of cake compared to Artificer’s one second kill achievement.

You will not be able to do this on a support build but if you have party members that can finish the job for you, you will still get credit if they kill it under 5 seconds. Bosses or enemies scale with the number of players active in a game so it will still be harder than just doing a solo run with a DPS build.

Keep stacking Soldier’s Syringe, Lens-Maker’s Glasses and Predatory Instincts first before adding a few Armor-Piercing Rounds. This will help you clear stages faster until you have enough items to erase enemies in a blink of an eye. You can skip sustain items and mobility items if you want as long as you know how to play safe. Keep dropping turrets and kite as much mobs around it and this playstyle rarely gets you hit from enemies especially in the early stages.

How to Unlock TR58 Carbonizer Turret

To unlock the TR58 Carbonizer Turret, you will need to finish the achievement “Engineer: Better With Friends”. It is completed by recruiting 12 minions at one time. The trick to finishing this achievement faster is to grab all drones and sentry turrets you find in every stage. All drones follow you to the next stage and so does the sentry turrets.

These count towards your minion count along with your two turrets as long as they are placed. Take any Queen’s Gland, which grants you a Beetle Guard by your side, you can get from boss item drops. These can stack but the problem will be the drop rate because boss items are as rare as legendary items.

You can go through the Gold Portal if you can find a Golden Shrine anywhere in the map. The Golden Shrine spawns rarely but if you manage to find one, a Gold Portal will appear where it will take you to the Gilded Coast. You will fight the boss Aurelionite which is a bigger and golden version of the Stone Giant monsters.

The boss will guarantee a drop of the Halycon Seed which summons the Aurelionite to fight by your side. This is the strongest summon from an item you can get and will help you throughout your run. Buying drones and sentries should be enough to get you to 12 minions and this is just an alternative way to get more minions and will help you if you choose to continue your run as long as you can.

How to Unlock Thermal Harpoons

To unlock the Thermal Harpoons skill, you must finish the “Engineer: Zero Sum” achievement. Completing the achievement is easy but it will take time. You will need to finish charging the teleporter with zero monsters remaining on the stage to complete the achievement.

This is hard because stages are fairly large in size and a teleporter will only take a tiny portion of it which can make clearing a bit more tedious. The trick or strategy here is to kill the teleporter boss as fast as you can and charge the teleporter to at least 98% to 99%.

Monsters will stop spawning once the teleporter is near completion and you will just need to clear out the remaining monsters on the stage. Engineer has very low mobility and you should get at least 1 Wax Quail to help you scour through the stage quicker. Clean every part of the map twice before charging the teleporter to 100%.

Engineer is a fun survivor to play with because of how his turrets mimic the Engineer’s items. There are more possible item combinations and builds you can play around with and as the game keeps on introducing new items, Engineer will have the highest potential among all survivors. All skill unlocks for the Engineer is easy but takes a great amount of time especially with the Thermal Harpoons unlock.