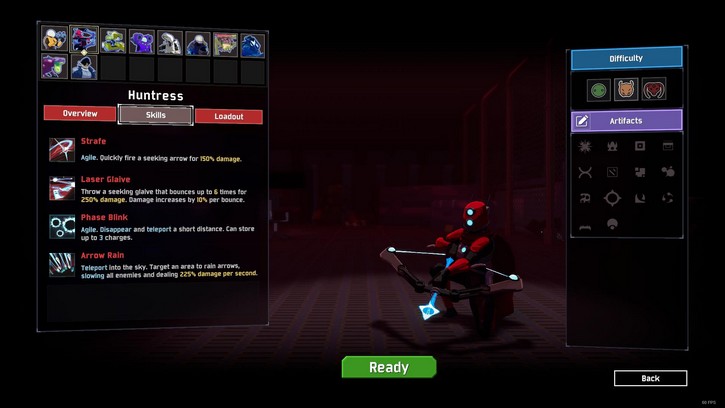 The Huntress is one of the earliest survivors you can unlock in Risk of Rain 2. She is a returning character and her kit has a mix of great mobility and good raw damage output. There are 3 skills to be unlocked from her loadout. This guide will talk about the builds you can use and how to unlock all skills for Huntress.

Huntress Best Builds to Use

The Huntress survivor has great multipliers and has a great mix of good mobility and damage output. She can be fast at killing multiple targets but has trouble with bosses. Her main damage output comes from her Laser Glaives and it needs multiple targets to be effective. She can use on-hit items if you decide to build on her Strafe skill but it will be lackluster and be significantly weaker than Commando’s build or The Captain’s build.

This build or item combination revolves around the Laser Glaives skill. She has one of the strongest secondary skills in the game and Backup Magazines will be essential to her build. The Laser Glaives have good multipliers and with a stacked Crowbar build, it can wipe multiple enemies without having the worry of targeting each of them.

This can help her survivability because you can focus on kiting while you keep throwing your Laser Glaives at the enemy on cooldown. Bandoliers and Alien Heads will help by reducing the cooldown on your Laser Glaives and Blink which will make you hard to kill.

The Lens-Maker’s Glasses will also be essential as the critical strike doubles the multiplier you get from the Crowbar. This allows you to possibly one-shot elite monsters with the Laser Glaives as well. Remember that the Crowbar only works on enemies above 90% so dropping them below that HP with random damage can work against you.

Items such as Brilliant Behemoth and Molten Preforator can help you deal with enemies that dropped below 90% health but it will take more time to dispose of them. After you complete this build, you can work on increasing your damage output from your Strafe and always add a few Old Guillotines when things get rough.

These items will be your added utility. Wax Quail will assist your kiting better and saves a few Blinks that can be used in dire situations. Hardlight Afterburners will also help by increasing the charge count and decrease the cooldown on Blink to allow faster movement especially on up and down terrain. Tougher Times is also necessary because the Huntress is one of the most fragile survivors in the game.

This is to add to the Laser Glaive build above where you will rely on your Strafe to inflict stacking bleed debuffs on the enemy. There will be a point where your damage output will drop because the Crowbar can not scale with the difficulty increase as the game progresses. You will have to learn to stack debuffs while kiting which can be possible because the Huntress can shoot while moving.

The Predatory Instincts will compliment the critical strike you already have from the Laser Glaives build and you can add an Aegis and Harvester’s Scythe to increase your durability. Adding a few Infusions can also increase your max HP to help with elites and strong boss monsters.

How to Unlock Flurry

To unlock the Flurry skill, you will have to finish the “Huntress: Finishing Touch” achievement. You will have to land a killing blow with every possible hit of a single glaive to complete the achievement. The Crowbar build is perfect for finishing this and you can complete this in the early stages of the game.

You should keep track of monsters that have high health and clear them first before throwing your Laser Glaive. The best way to complete this achievement is to find and clump up as much Lesser Wisps you can find in the stage. These enemies will drop from a single glaive hit even without a Crowbar.

It will be hard to find multiple enemies of the same type in the early stages of the game and by the time they spawn quicker, they have already scaled well enough to not get obliterated without having Crowbars. Once you have the build completed, you can complete this achievement normally without noticing because of how strong Laser Glaives can be with a stacked Lens-Maker’s Glasses and Crowbar build.

How to Unlock Phase Blink

To unlock the Phase Blink skill, you will need to finish the “Huntress: One Shot, One Kill” achievement. This achievement is pretty straightforward and is completed by collecting and carrying 12 Crowbars at once. This is perfect because it is also the build you would want as the Huntress.

How to Unlock Ballista

To unlock Ballista, you must complete the “Huntress: Piercing Wind” achievement. It is completed by finishing the Rallypoint Delta stage from start to finish without falling below 100% health. This can be hard to accomplish alone but it is possible.

To finish the achievement, you will need to have good mobility at this point. You need to be moving swift with Paul’s Goat Hoof and have multiple charges on your Blink from the Hardlight Afterburner. Find the teleporter as quickly and safely as you can and activate it immediately when found.

Try to have active shields up at all times but it is completely optional. Having Aegis, Personal Shield Generator and Topaz Brooch to gain shields and barriers and give you leeway in taking a few damage. The best item will be the Lunar item “Transcendence” where your whole HP will be converted into shields and you can play the stage normally.

Play safe as much as possible and circle around the end of the teleporter and do not be afraid to go outside the radius if things get crowded during the teleporter charge. Keep using the strategy of throwing Laser Glaives every time on cooldown and kite while it is on cooldown. The Huntress is a ranged character it should be way easier than Mercenary’s Prismatic Trial achievement.

The Huntress is a great overall survivor with minimal weaknesses and clear playstyle. All her abilities are easy to unlock compared to other survivor but it is disappointing to see how lackluster her unlocked abilities are compared to her basic ones. Aside from Flurry, the other skills feels like a lesser version from the basic skill.