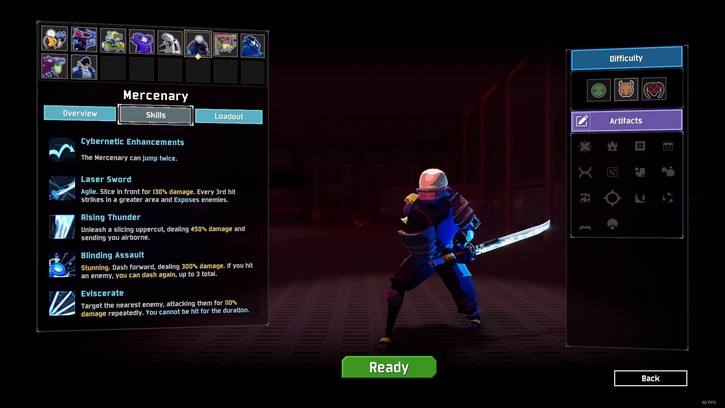 The Mercenary survivor is a unique melee class with good multipliers and has the most mobility in any survivor in Risk of Rain 2. His playstyle is unique because of his low durability as a melee class. This article will show you all the right builds to use and learn how to unlock all skills for Mercenary with the them.

Mercenary Best Builds to Use

The Mercenary is a glass cannon survivor even without the Shattered Glass that cuts your max health in half. His strength lies in his ability to dash in-and-out of situations with every single skill he has. This is what makes the Mercenary the best survivor to use when beating the game to unlock the Captain. His main damage output is his Eviscerate combined with his Laser Sword that can add Vulnerable debuffs on enemies to increase your damage output even more.

For Mercenary, these mobility items will work wonders and improve your kiting ability when you most skills on cooldown. Wax Quail is a requirement for Mercenary because his double jump passive can trigger the Wax Quail unlike for other survivors who gets Hoppo Feathers.

This allows Mercenary to zigzag between obstacles and enemies without the use of any skills. Mix in a few Blinding Assault dashes to stun multiple enemies and dash an additional 3 times. The Paul’s Goat Hoof will help with your strafing when fighting with your Laser Sword. It can get dangerous to slice three times to inflict the Vulnerable debuff in the later stages especially when you are surrounded by multiple elites.

Tougher Times is a staple for Mercenary because of how squishy he is. Your worst nightmare will be fighting Red Elites with the “Blazing” prefix. They will deal damage when you get near them or stand in the fire they spread across the ground they walk on. Any build will require the Tougher Times and it would be best to start building leech as well with any build you use.

This build or item combination will help Mercenary have more utility by adding charges to key skills and decreasing skill cooldowns overall. Bandolier will not be that necessary but it would be great to have if you are lacking a few Alien Heads. Once you have these items, you can have more freedom in using your Eviscerate and Blinding Assault.

These two abilities are your main damage source but not only that, it will also make you virtually impossible to hit as having Blinding Assault will stun enemies non-stop while you dash through hordes of enemies. Eviscerates will make you invulnerable for the whole duration which lasts for about 1.3 seconds.

Reducing the Eviscerate cooldown from 6 seconds to 2 seconds will already be a big deal when it comes to survivability and mobility. It is also possible to reduce this down to 0 which is what we are after for in this build. The damage output scaling will come from the common items and uncommon items you pick up.

These item combination sole purpose is to increase your damage output and nothing more. Mercenary does not have the highest multiplier and mostly deals with short bursts of damage instead of a one-shot build or a consistent damage dealer. For this, Crowbars and on-hit items will not be that effective for the Mercenary.

Focused Crystal is an underrated item because of its range. Its damage increase is multiplicative and increases by 15% for every stack. Now for the range, it still has a decent 13 meter range where it would take effect and believe it or not, most of the damage you will be doing with any survivor will be at close range. Since Mercenary is the definition of close range fighting, the Focused Crystal is perfect for him.

The Lens-Maker’s Glasses adds critical strikes with every attack and it is always good to have with any survivor. The Predatory Instincts help you to get off the Vulnerable debuff with the Laser Sword quicker as well. With enough attack speed, you can dash with your Blinding Assault to stun your enemies and do a whole Laser Sword combo just before the cooldown reset of Blinding Assault. Since Eviscerate scales well with attack speed by adding additional damage ticks, getting a high attack speed is a high priority.

These items will significantly buff your damage output and if you focused on getting lower cooldowns and mobility items at the start of the game, you can quickly increase your damage output with just a single piece of these legendary items. Make sure you have plenty of Lunar coins stacked up to pay for Newt Altars and Lunar items in The Bazaar Between Time.

How to Unlock Rising Thunder

To unlock the Rising Thunder skill, you must first finish the “Mercenary: Demon of the Skies” achievement. Completing the achievement is easy and you will need to not touch the ground for 30 seconds. As Mercenary, this can be done in the early stages with a help of a few items.

The items needed to help you as much as possible to stay in the air are Hoppo Feathers, H3AD-5T v2, Backup Magazine, Hardlight Afterburner and Alien Head. Just doing the cooldown reduction build will be good enough for the achievement.

Firstly, you should start looking for a high cliff or surface where you can jump off. Next, propel yourself even further in the air by double jumping and using Eviscerate then Blinding Assault upwards. If Eviscerate and Blinding Assault is on cooldown, you can use Whirlwind to delay your drop even if it does not propel you upwards, it can still help.

The exception is when there are enemies you can chain your Blinding Assault on. This means that you can use it 3 times which will be required to be chained every cooldown when you are trying to finish this achievement.

How to Unlock Slicing Winds

There are numerous variables involved when trying to unlock the Slicing Winds ability. You must finish the “Mercenary: Ethereal” achievement where you would need to finish an entire Prismatic Trial run without getting hit or any form of damage to your HP. There are workarounds to this because some items in the game can give you shields and getting hit with a shield active will still keep the challenge alive as long as it does not go through your HP.

The Prismatic Trial changes frequently and is usually very short. Most, if not all, Prismatic Trials only has 2 stages to finish. To activate the teleporter on the stage, you will have to break Time Crystals which can already damage your character. The items and chests are all fixed for the entire seed in a Prismatic Trial and you would just need to master a single one.

The best one you can finish will be the ones with the Artifact of Glass active for the run. Since your goal is already to not get hit, losing half your HP pool for 500% extra damage does not sound bad at all. Keep memorizing the spawn patterns and the chests with the best loot so you can make your own pathway in completing each stage of the Prismatic Trial run.

There is a long list of things to keep in mind when playing the Mercenary.

Unlocking all the skills for Mercenary can be hard because of the Prismatic Trial run and that is what usually separates the pros from the casuals. Risk of Rain 2 is a challenging game and you should know that because of the roguelike categorization. This will take the most practice out of any survivor and you will definitely feel like a king after unlocking Slicing Winds and show off your achievement.