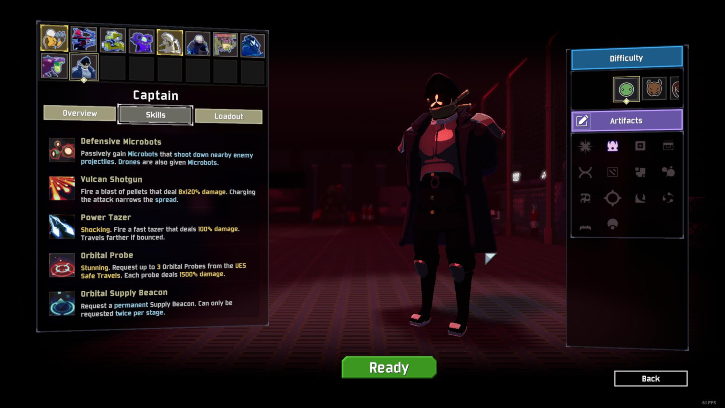 Captain is the newly released survivor from the Risk of Rain 2 launch and it is also hard to unlock. The Captain has a unique set up that allows him to either support with his beacons or can burst enemies with his Vulcan Shotgun and Orbital Probe. This guide will explain how to unlock all skills for the Captain.

The Captain Best Builds to Use

His damage output is similar to Artificer and his Vulcan Shotgun can also work like the Commando’s on-hit builds. Great item combinations for the Captain will be the following

This is an extremely powerful primary ability build. Each hit with the Vulcan Shotgun will inflict a bleed effect on the target. With high enough attack speed, you can reach triple digit stacks on bleeds in the late game and make everything explode with Shatterspleen. You can also build Lens-Maker’s Glasses for critical strikes and add Predatory Instincts for the additional attack speed.

This build is more on doing heavy nukes and blast targets in an instant. The Captain’s utility ability is an offensive one that calls down orbital strikes for insane damage. With the Crowbar, you can set this up to do even more damage and eliminate bosses in a flash. The Hardlight Afterburners is what makes the build possible.

You should try and wait until you have multiple uncommon items to trade in the Bazaar before activating a Newt Altar to trade in for legendary items.

How to Unlock Beacon Resupply

To unlock the skill Beacon Resupply, you will need to enter 10 different environments in a single run. 10 is a very high number but the trick here is that secret environments count towards the progress.

The secret environments you should focus on getting to is the Bulwark’s Assembly, The Void Fields, Bazaar Between Time and A Moment, Fractured. Keep track of how many Lunar Coins you have when starting a run to unlock this skill. You will need a few to alter the environment through the Bazaar Between Time.

You can spend Lunar Coins to change the environment you will go to and you will also need Lunar Coins to spend to open the Newt Altar to keep entering the Bazaar Between Time. You will have a total of at least 5 different environments for the first 5 stages in the playthrough.

For the 5th stage that will always be Sky Meadows, you can go to the Bulwark’s Assembly by entering the combination on the tablet to summon the portal. The location for this is always beneath the rock formation so you will have to jump down once you see the platform.

How to Unlock Beacon Hacking

The TC-280 Prototype will only be available in Rallypoint Delta. It will always cost a hefty sum and the price scales with the stage you are on. Just keep farming monsters until you have enough and you will have the achievement in no time. You can also unlock both of the Captain’s skills in just one run so make sure to prepare in a way that you will be able to complete them both.

Attack speed is the Captain’s main stat to be focused on. His passive is that he starts with the Defensive Microbots item where it negates projectiles based on the Captain’s attack speed. As long as your attack speed is high, all your on-hit items grows exponentially as one Vulcan Shotgun hit will always be registered 6 times for each hit.

Beacons are not that useful because they are only usable once. Do not think about it as much and you could just use it for every teleporter for maximum efficiency.

It is easy to unlock all of The Captain’s skills especially when compared to other survivors. You can tweak your playstyle with what kind of items you get and even experiment on new builds and play with the Artifact of Command active. His primary skill has unlimited potential and it would be fun to play around it and discover your own customized build.