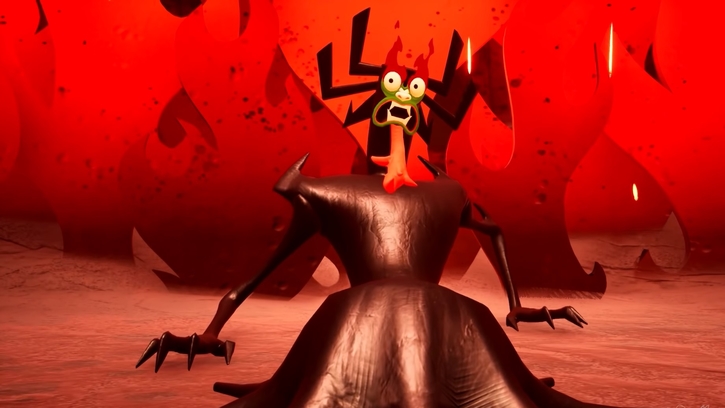 As the Samurai walks into Aku’s menacing, flaming lair with steadfast determination and anger, he challenges the evil villain. The portal to the past is the essential purpose of Samurai Jack’s mission. He vows to access the past to try and kill Aku even before he could unleash his evil grasp over the world.

This stirs up the giant dragon-like beast and Aku slitheris into presence, reminding him that he has one final, seemingly unconquerable hurdle before he can do so. Having angered Aku by decimating all his allies, Aku arrives to defeat the Samurai himself, setting the stage for an epic showdown.

Aku is a stationary opponent for a large part of the battle.Much like a tree , he is rooted to the spot and launches attacks on you from his position. When you get up close to him, he can use fire or magic to attack. Both these set of attacks are easy to counter but deal heavy damage so you have to be careful.

The main element in Aku’s arsenal is his flame prowess. He can shoot flame, albeit slowly, from his mouth and guide it towards the Samurai even when a dodge is in effect. This makes it a pesky offensive move to deal with and is one of the most frequently used moves by Aku when you move in close to attack him with your trusty sword.

Use your block to parry it easily. But if the flame does touch you when you are not blocking or you are moving in, it can cost you a good chunk of HP. Try to get out of the way and use the time to launch long range attacks on Aku using your bow and arrow or shurikens. Exploding arrow points give you maximum damage against a high range opponent.

If you start dealing damage on Aku, he dissolves into the ground and turns into a black tar on the floor. You cannot attack or deal damage to this sludge in any way. But, remember to stay away from it.

This is because Aku can launch spikes from the ground inside this black tar area when he senses the Samurai’s presence. It also follows you around the battle arena. So, watch out as you get only a 2 second buffer period between the black tar moving to a new location under your feet and the spikes deploying.

Also, Aku can upgrade this attack into deploying multiple blotches across the battle arena. When this happens, you have only a couple of seconds to find a patch of dirt with no tar to stand on. Failing to do this means you will have to navigate a complex maze of sharp spikes while jumping frantically.

Aku can also conjure up minions. This zombie warrior is the most agile and competent minions in the game. They fight as hard as any previous bosses and have a range of swift and powerful sword moves that can break your block and cause severe cuts and damage.

But Aku’s ability is limited to only conjuring up one of these grizzled warriors at a time. He does this to deflect your focus, recoup and possibly switch positions when you are not paying attention to shoot his flame from a different part of the battle arena.

These minions take a few well-timed strikes to take out. We suggest you pull out your massive Reaper that does heavy damage. This will help you break the block and is also the best weapon to attack Aku from close distances. Also, you can choose to throw shurikens or shock grenades at these minions and walk them down when they are stunned.

Aku can use his body like an elastic band and extend to swipe at you. This happens when you take a break or there is a lull in the attack. If you stay too close to Aku for a considerable duration of time, the swipes will be used against you to cause damage. They are tough to dodge and once they land, you can be sure that another one is coming.

The best way to counter these strikes when you are up-close is to try and land in quick succession and move away. When you land a strike successfully on Aku, he reels from the impact and this allows you to continue your attack. Do not pause as he will start swiping at you. If you feel a break coming, move away from range and attack him from a distance.

Aku has flame columns that he can launch onto his tar circles. Watch out for these as the areas where they will pop up, glow for a second. Take cover and get moving and regroup once the barrage is over.

These flame columns do heavy damage and sometimes, the minion takes advantage and rushes you while you flee. So watch out for this double whammy as it could end with you having to start over this dangerous encounter.

Once you finish 75 percent of the fight, Aku assumes his giant form. Towering over the Samurai, he tries to attack you from far away, swaying and swiping at you. He also launches his flame from a different angle which is tougher to dodge.

The best way to counter giant Aku is to get up close and start attacking the base. If you try to stay far and shoot arrows, he will stretch and reach you which causes damage. By staying close, you might take a few shots but you can do constant damage which will force him to unleash his tar spots which will give you some respite.

Defeating Aku is Samurai Jack’s goal in life. After this is complete, Aku lays cowering on the ground with nowhere to go, begging for mercy. As the time trap Aku creates falls around him, Aku tries to escape. But the Samurai makes a giant Jordan-esque leap and slashes Aku with his sword.

Aku bleeds smoke and the time barrier shrinks. Ashi appears out of nowhere and takes Samurai Jack through the portal. As they reconcile and hold hands through their journey across time, the game ends with them flying away after a hard fought victory.

The Samurai heads back to where Aku transported him from in the first place and proceeds to slash at the limping opponent. As the sword plunges into Aku’s skull, the demon’s tower collapses leaving a huge crater. Aku is finally vanquished and Ashi is finally free of his grasp.