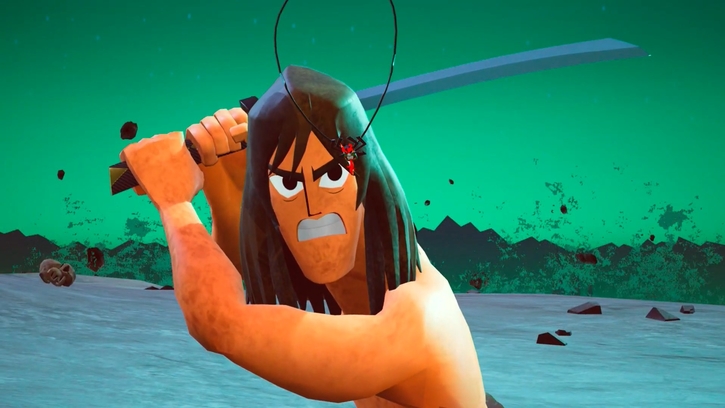 After you traverse through Aku’s Mines, you head on towards Boon Castle. This unapologetic wasteland offers a variety of challenges. Samurai Jack’s quest to kill Aku in the past, Aku unleashes a horde of warriors to try and detract you.

When you head towards the castle of skulls, you stumble upon Aku who explains to you that you are caught in a limbo and the overlapping and non-congruent timelines will lead to Samurai Jack questioning his reality. In the wake of this conversation, the Earth opens up to reveal two large beetle drones armed with pincer-like stabby forelimbs.

The tricky element in this boss fight is to counter not one, but two villains who are identical in attack and defense. The beetle drones are equipped with sword-like slashers and a range of long range attacks and block breaking combos that you have to be wary of. Follow the tips on this guide to quickly defeat the twin beetle drones and progress in this gripping storyline.

Use the corners of the map to isolate the beetle drones and attack them one by one. Even though they try and combine their assault you can create distance and concentrate your efforts on a single opponent, which is much easier.

When one of the drone’s is focused on you, move quickly to the opposite end of the map. This causes them to follow you while the other beetle is still trying to focus on your movement. This gives you a brief window of attack that you can then use to attack one of your twin opponents.

Also, use your gun to stop one of them in their tracks and quickly switch to sword attacks.. When you have one of them isolated, use your Kiai Energy by hitting R3 + L3 on your console joystick. This allows you to deal heavy damage on a slowed down opponent.

Watch Out for the Spinning Wheel Attack

When you move out of range of one of your opponents, they use their six legs to turn into a wheel of blades and spin towards you. Be ready for this. There is an obvious build up for this attack as you can see them balling up. When this happens, be ready to use your L1/LB quick dodge button to try and get out of the way.

When they unfurl from this, you have a brief window to shoot or attack them with your sword. The sword attacks deal more damage but the gun can attack them from long-range which might be more pertinent to your position after the dodge.

When you deal more than half HP damage to one of the beetles they slump down and become immobile for a short period of time. During this brief window, use your weapons to deal heavy damage. Until the flame around the beetle comes back on, you can attack the beetle without worry of retaliation. But beware of the other enemy who might launch an attack. The other beetle can hurt you with the pincer slam or also slash you and deal a lot of damage. Use  the right stick to look around when you are attacking a downed opponent.

When you do enough damage, Samurai Jack draws a long axe and slices the beetle in half. Once this is done, you can now attack the other beetle and kill it too. This way you finish the first part of the beetle drone chapter.

When you defeat and chop up both your opponents, Aku appears again. Using his magic, he reanimates the beetle by fusing them into one giant mega beetle. Aku then disappears leaving you to deal with this magically sewn together super beetle drone. This beetle has all the attacks of the original beetle drones and can be a little tricky to deal with.

The fusioned beetle is surrounded by purple flame and causes a lot of damage when it connects with the blade feet. But since it is only one opponent, use the entire map to navigate constantly while it launches attacks. There are brief periods of lull in between attacks which Samurai Jack can capitalize on.

Use the pistol from afar and during the lull, get up close and launch a combo with your sword or even unleash Kiai Energy to cause considerable damage. Throwing knives also are excellent weapons to counter this beast. Get to a considerable distance away where the slam attack’s aftershock won’t deal damage and then throw knives at the beetle drone. This will accumulate quickly, causing a lot of damage. Other throwables like the shuriken or weapons like the machine gun can be used. But they won’t be unlocked at this stage if it is your first play through and it is better to use your trusty sword in this case.

The combined beetle has a few new attacks up it’s sleeve. So beware of flying spins and launching slams. These attacks can come as a surprise and hence it is better to stay out of range for a bit to learn more about it’s capabilities. But, it is a rather weak opponent and can be defeated in a matter of minutes if you consistently do damage.

If you acquire a lot of damage, try consuming a potion to regain health and fight again. But this won’t be necessary if you dodge well and choose the right time to attack the beast.

Once you defeat the beetle drones, you find Aku’s pendant around the neck of the beast. This signals his control over all the demons attacking you. Enraged, you throw it up in the air and destroy it with your sword. This act transports you right into the next battle.