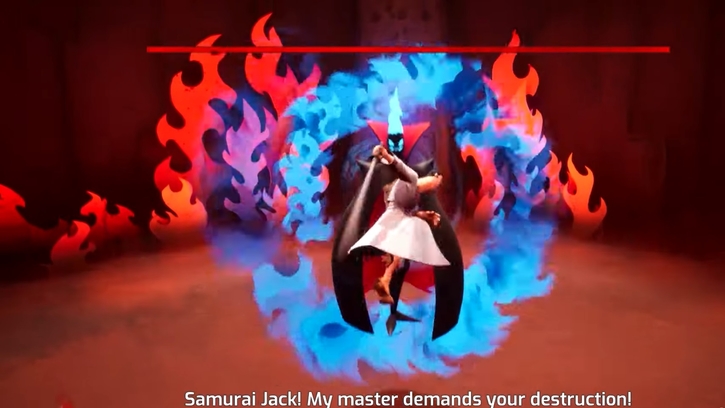 As you fight through a horde of enemies under Aku’s spell, you will face one enemy repeatedly in Samurai Jack Battle Through Time. Demongo, a wizard is Aku’s loyal servant who tries to stop you at almost every level of the game.

You face this blue-flamed wizard in six different locations in the game. The wizard himself is very weak and has no real attacks but can spawn a horde of minions who can swarm you and do damage.

Also, as the game progresses, the wizard becomes harder to beat. The minions are more advanced and it takes longer to beat him. But, not to worry. This comprehensive guide will give you tips and tricks on how you tackle this boss in Samurai Jack: Battle Through Time all six times you face him.

Your first meeting with the Demongo happens towards the end of the cave of the ancient area. As you traverse the caves and stumble upon multiple enemies and entrances, you enter an arena with a floating wizard who announces himself as Demongo. He uses his magic to conjure up several small beetles and Celtic demons.

The best way to defeat the wizard is not to attack him directly but to target his minions who try to kill you. Each time you kill a minion a dark, illuminated orb appears, which you then have to attack. A well placed 5-strike combo off your sword will send this orb rocketing towards the wizard, causing heavy damage.

Also, watch out for the gun toting Celtic Warrior spawns during this battle as they pose your biggest challenge. Using clever movement and isolating each minion in a different corner and quickly landing 5 hit combos is the best way to tackle a horde.

Choose the right time to unleash the Kiai energy. If you find yourself surrounded by 4-5 use Kiai Energy to slow down opponents while you get two or three kills and cause major damage to Demongo floating above.

The second time you face the wizard Demongo is in the Undead Cemetery area in the long chamber with the pillars. This time Demongo is better prepared with a better roster of minions to unleash upon Samurai Jack.

This time, Demongo can stun you with his bolt that he uses occasionally. So watch out for this. He usually has a voice prompt of croches mid-air before he attacks you directly. The minion beetles he uses are just smaller versions of the ones you faced earlier and have the same spinning blade attack and can cover distance quickly.

Once you take out the scuttling beetles, we suggest you use the Iron Scythe and the Shurikens on the minions to dispatch them quickly. The Scythe is especially handy in keeping a swarm of enemies at bay with its potential to displace multiple enemies. Once you kill the first wave and attack the orbs, Demongo is brought to his knees. Use this time to unleash your Kiai Energy or use heavy weapons to launch combos at him. As he begins to levitate, hit him again. This will keep him on the ground allowing you to prevent further minions from emerging.

From here on, you can make quick work of the defenceless wizard who will use a portal to flee. Take the portal behind him to progress in the game. But remember, these pesky Demongo encounters are far from over.

As you take up your black battle Samurai vest and sport a rugged look, you stumble upon Demongo again. This battle is a short but tough one where Demongo is floating around in a circular room with multiple arches.

The combat style is very similar to the first two but the minions are much scarier. 10-foot high zombie soldiers wielding spears are unleashed upon you as the wizard cackles above, making your life miserable. But, there is a way to kill them easily. As they are clunky and slow, use your Shurikens or Throwing Knives at them that you collected throughout the past missions. Just a couple of well-placed knives are sufficient to get the orb.

Attack the two orbs generated from the two zombies to floor Demongo who you then launch attacks on. As you successfully reduce 75 percent of his life, he will flee while pledging allegiance to Aku. You are done with half of the Demongo encounters.

This is the shortest Demongo encounter. Demongo calls two small zombie soldiers first who you can take out quite easily. Use the orbs from their corpses to displace him from the sky. At the same time, he calls up two larger zombie soldiers who you can use your Kiai Energy explosion or any other level 4 Kiai Energy attacks to kill them. Then the downed and worn out Demongo flees, allowing you to progress to Scaramouche.

This is the most taxing Demongo battle. With a seemingly endless horde of minions and zombies, the combat lasts a very long time. But, you should have amassed a vast arsenal of long and short range weapons and level 4 Kiai Energy attacks now to help you counter the swarm.

This battle happens in the circuit room where the wizard unleashes Celtic Warriors with RPG’s (yes, they are particularly annoying), Beetles, and Zombie warriors with Scythes and giant swords and shields or axes.

Use your long range shurikens and throwing knives or Kiai energy rush strikes to counter a large drone of enemies. Remember, the larger enemies are more susceptible to the throw weapons and it takes only a couple of well placed hits to destroy the,. But do not overuse resources here as after this mission, you’ll have to face a horde of other bosses.

Also, the Kiai Rush with the Trident or the Spinning Kiai rush is very efficient in clearing multiple enemies in an area. As they slow down you rush between targets killing them with one slash of your blade. And this attack lasts a considerable duration, showing you the extent of Samurai Jack’s powers.

As you move towards the end of the game and the great showdown, you meet Demongo for the final time just before the epic final battle. This final stumbling block is extremely hard to counter.

This final Demongo encounter is one of the longer battles in the game and is extremely time consuming and taxing. He throws every trick he has at you, demanding every bit of skill and ability to counter it.

Giant mallet-wielding zombies are extremely robust and take about 10 slash combos to defeat. Meanwhile, Demongo zaps you with every chance he gets, making things much tougher. You can use your piercing or explosive arrows to attack him when he is floating above you. Watch out for the gun-toting drones who are very agile. Ironically, they can be taken out with a couple of bullets.

After this wave, you face a giant beetle who is extremely susceptible to blades like the scythe or sword. After you defeat the beetle counter the swarm of sword-wielding zombies using your Kiai Energy attacks or save it for the giant Celtic warriors. The Reaper (Scythe) is extremely effective against the finned monsters and Kiai explosions can push enemies back to give you some room to regroup.

Use the Kiai attacks and throwing weapons against the smaller beetles and use heavy attacks to try and make some space when you are swarmed. Also, use healing potions when you find your HP dwindling as this is a long battle.

After you defeat all the minions, you are done with Demongo, who anti-climatically just shatters. You then move on to the main villain Aku, who you have vowed to destroy.