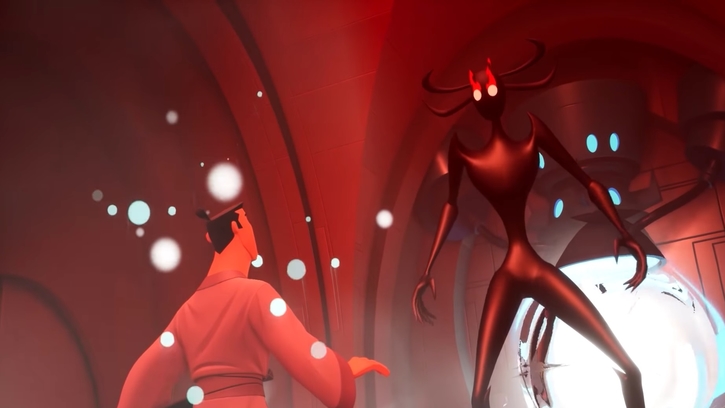 After the successful defeat of Lazarus 92, you move on through landscapes in your search for a direct confrontation with Aku. On hearing about Aku’s Castle, the Samurai then rushes to try and defeat Aku. But before the final battle the whole game is building up to, you have to confront Ashi.

Ashi, who is Samurai Jack’s love interest throughout the series, appears through a teleporter and confronts him about their encounter earlier. When the Samurai confesses that his hand was forced, Aku reveals himself to be the puppet master controlling Ashi’s actions.

When Aku reveals himself to be the injured Ashi, she transforms into a female Ashi-Aku hybrid with a myriad of Aku-inspired moves to make your life extremely difficult. But this also signifies that this is Aku’s final hand before he has to face the Samurai himself.

Watch Out for Her Movement

This Aku Ashi hybrid is a 15 foot tall, broad sword wielding warrior who kicks you through a teleporter and follows you into the battleground. Once in the zone, she shows off her impressive range of movement. She leaps large distances to close gaps and uses her long limbs to attack you.

Once you are close by, she crouches down and uses her sword in a guillotine-like stabbing attack that is innovative, hard-to-dodge and heavily damaging. So, you will have to make sure you are constantly on the move and looking for gaps in her attacks.

When she closes the distance, you know for sure that she will launch her sword guillotine immediately. Be prepared to block it. Once she finishes, you get a brief window to launch attacks. You will know when you land a blow when she bleeds flame.

Flitter between going in and out of range and use a variety of long and short range attacks. The only way you can cause steady damage is to judge the pattern of her attack. When she finishes her attack, launch yours to cripple her.

When you cause Ashi some damage, she plunges her sword into the ground and unleashes a 360-degree flame ripple all over. This pushes you back and causes severe damage. This means that you have to use your block and hold it until this attack is over. If your block is upgraded enough, you should be able to hold on.

This attack is a visually spectacular but rather ineffective attack. The primary purpose is to create distance when Ashi is hurt and she does not use it to cause you much damage, even if you block it, it knocks you backwards through sheer force of impact.

Once the flame tornado is over, you will be far away from Ashi. Use this time to launch shurikens or exploding arrows on her from a distance. This will pile on the damage and force her to try and close the gap.

Once you reduce her HP by half, she will power-up. This is signaled by a red flame that surrounds her. Instantly, she will launch her new upgraded attack on you – her laser eyes. She follows you with bursts of lasers that will follow you.

You need to keep moving to dodge this attack. When it connects, it causes severe damage and you need to keep out of the way. As soon as she finishes her laser eyes, use the window to move up close and use the explosive charges on her. Make her pay and launch these severely damaging explosive shock charges that immobilizes her. Use these seconds to launch heavy attacks and reduce her HP further.

As you enter the final stages of the battle, she uses her flame tornado much more frequently. You will have to use your block effectively and find gaps. When you figure out the rhythm of her attacks, use the lulls to launch long range attacks again.

Block when needed, but keep causing damage. If her HP reduces further she will increase the frequency of her attacks. This is when you will have to switch to a stronger block weapon like the Reaper that has a strong block but also does heavier damage than the sword close-up.

When you use these heavier attacks, you can pile on damage. The one weakness this Aku-Ashi hybrid has is that she does not have a great defense. Though she uses her sword to try and block attacks, she still takes damage from heavy attacks. If you feel that she is being resilient, a well-timed Kiai Energy attack can cause her to become immobile. This takes away her biggest asset and leaves her vulnerable to more damage.

In the final stages of the fight, it is easier to attack her long range. If you run out of arrows or shurikens, you can use your throwing knives. These are not as effective but the damage compounds over a few attacks and also exploit her vulnerability well. Always have a finger on the block button throughout this encounter as this is the key to defeating this Aku Ashi hybrid.

Once you defeat her, the scene is set for the Samurai to kill this Aku Ashi hybrid. As the sword is lowered, the Samurai hesitates because of the demon’s resemblance with Ashi. The demon takes advantage of this and kicks you away, as she launches her final attack, Ashi breaks free from Aku’s clutches, opens up a portal and destroys this hybrid with a bolt of fire. After this, she opens up a portal for you to take directly to Aku’s chambers to try and defeat him finally.