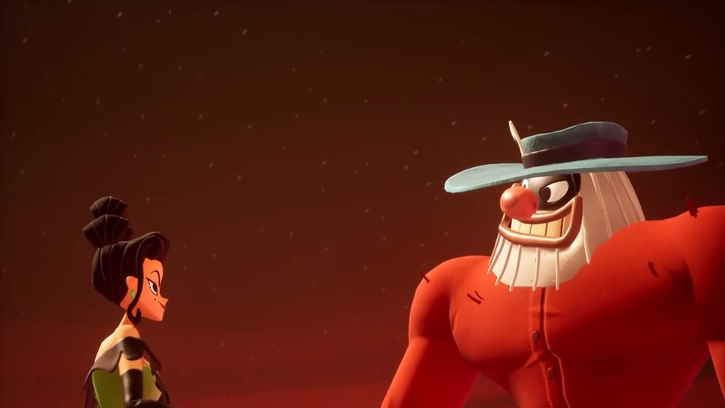 Josephine and Ezekiel, the famous bounty hunting couple in the Samurai Jack series pose a strong threat to the Samurai on his way to killing Aku. In the video game, their meeting happens on a moving train. This foreshadows the Television series where the couple are seen robbing trains.

The double threat makes this boss fight highly time consuming and difficult. The battle happens on top of train compartments and the battle is a 2D platform-type engagement compared to the three-dimensional battles seen across the game.

Both these characters engage you individually, leaving you very little time to recoup between battles. This makes the fight challenging. But our tips will help you defeat them easily and resume your search for the evil Aku.

This cowboy bounty hunter with mechanical arms is the first boss to fight you in an open compartment. The character is armed with guns on the mechanical arms and can shoot in a 180-degree arc, giving you little room to dodge effectively. He is large and robust and poses a serious threat.

He has a strong block, thanks to his mechanical arms. He crosses them in front of his torso which forms an effective iron shield. This can take some damage before relenting. The best way to break through and land some attacks on him is to use heavy weapons. A fully upgraded iron sword or the Reaper are great weapons for this. The reaper being a huge, heavy Scythe can break the shield in 2-3 well-placed blows.

Once his shield is broken, quickly switching to the sword or attacking him with shuriken or throwing knives can be effective. Watch out for his jumps. He tends to jump high and slam on to you. This attack does a lot of damage but can be avoided by just using the dodge and moving to the other side of the compartment.

Stay close to Ezekiel and you can avoid a lot of his attacks. Since he lacks and close-range swipes or punches when you are right up to his torso, it is easy to land a barrage of attacks. The best way to defeat him the first time is to overwhelm him with continuous attacks. Use your Sword or Scythe to land combos on him repeatedly.

Also, before he attacks, he starts glowing red. To stop oncoming attacks, deal some damage and he immediately stops. You can use throwing knives or shurikens for this too. This is an efficient way to keep attacks at bay and get through him quickly.

You face Ezekiel again after you defeat Josephine. The second time, Ezekiel brings forward a whole range of new weaponry and attacks. The energy bolt rain, the pulse bullets and the jump slam all cause heavy damage.

Remember that he can also jump fire. He uses this often to counter your short-range barrages. This means that you’ll have to modify your approach from the first time. The jump fires are easily countered using the dodge and you can use your guns or a shuriken to attack him when he is in the air.

The best way to defeat him is to attack him as much as possible from afar and try to jump and dodge his attacks. There will come points where he charges up to launch his aerial strikes on you. Use this time to get up close and use your sword to do damage.

The best bet during the second meeting is to stay patient and use your blocks. Your Scythe has a good block but also loses HP points fast and can break. So, use it carefully as it is your most damage dealing weapon when upgraded. Also, you can try using throwing weapons to attack him continuously even while countering some of his attacks. He can close distance fast, so stay on guard and don’t shy away from blocking.

After you defeat him for the second time, progress along the train to meet him for the third time. This time is very similar to the second meeting. Try and attack him close up and dodge his attack. You can easily overwhelm him if you are confident with your quick combos.

If he manages to displace you and create distance, you can again rely on your machine gun or throwing weapons. Watch out for his deceivingly quick movement and red glow. He can attack you from a distance but is weak up close and has only his pistol to help him during these scenarios. If you attack him enough, he gets knocked down for a while when you can use your hands and feet and samurai your way to a third victory.

Josephine is a trained assassin who is tiny but packs a punch. She has a range of weapons that can cause a lot of damage. Together with Ezekiel, she is half of a deadly duo that you have to get past to defeat Aku.

She is trained in the art of gentleman’s combat and she has a parasol that doubles up as a stylish yet deadly blade. She also possesses twin guns and has a good range and rate of fire. She uses this combined with fast and smart movement to attack you

Her one weakness is her lack of physical strength as she tires when she takes a few blows and immediately starts taking deep breaths and cannot attack you while she recuperates. Use this time to deal heavy damage to her as she is immobile. When she glows red, she will start attacking again (usually a jumping gun fire), so get out of the way. She also has a dive bomb that she uses to cause heavy damage. When she jumps up and points her umbrella at you use your roll dodge to get out of the way.

She uses her umbrella as a shield by unfurling it. So, use the Scythe to break the shield and cause damage to her. But watch out for her gun as it shoots at a fast rate. Use throwing weapons when she is far away but try to keep close to her and use your fists and feet or the sword as they are most effective against her. When her health bar runs low, she rockets away leaving you to deal with Ezekiel instead.

Fighting Josephine and Ezekiel Together

After defeating them individually, you move on to a very long, open compartment on the moving train and face them both together. They are a clever duo who try to flank you. One gets up close and the other stays far away shooting you to do most damage. The only way to counter them effectively is to isolate and attack.

Josephine is easier to damage but Ezekiel has attacks that cause more damage from far away. When you are hyper focussed on Josephine, he tends to launch and slam or use her energy rain on you. Be aware of his gun too, which he can fire from far away.

Josephine will use her umbrella spin to push you away and shoot you or jump up and rocket into you. Do not stay in between the two of them as this is where you will absorb maximum damage. Try and push one of the bosses towards the edge of the compartment. This forces the other outside range. When you isolate them effectively, use heavy attacks to cause most damage.

If you find yourself in between the bounty hunting power-couple, use your Kiai energy attack. Slow them down and then launch heavy attacks using the Scythe or the machine gun. Use this effectively to cause damage on both or eliminate one of them. If you manage to reduce the HP of one of the two, they fly away leaving you to deal with the other.

Once you kill one, the other invokes the power of the purple flame. Their attacks are stronger and they move faster. But this also means your victory is imminent. Watch out for Josephine’s spinning umbrella blade attack in the final stages. She brings it out when threatened and it tends to hurt. Once you are down to one opponent, switch weapons and use your pistol to attack them afar. Even the shuriken and throwing knives are a good bet here as they give you breathing time and cause severe damage on the opponent.

Once you defeat them, they hang on to the train and taunt you one last time. The Samurai lets them fall and they plunge into a lake below. Before this happens, Samurai Jack glances upon the Aku amulet on Josephine’s hand, which reminds him of his main objective in his fight to defeat Aku.