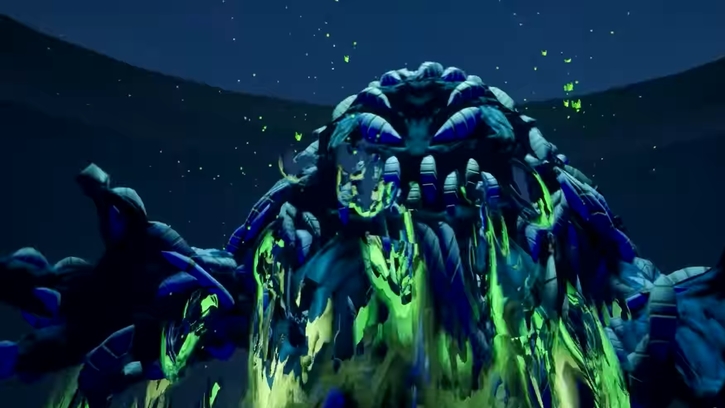 As you traverse through the various areas in Samurai Jack Battle Through Time, you come across a variety of monsters. But none of them are as gruesome and gargantuan as Lazarus 92. Made of giant blue slugs, this boss is the final big opponent you face on your quest to defeat Aku.

When you enter the area, the Samurai feels a tingle go down his spine. Suddenly, numerous blue leeches congregate to form one giant being that looks like a giant super villain with large swiping hands and a torso stuck to the floor with no legs.

This monster looks large and intimidating but is a small stumbling block. If you know a few tricks it is rather easy to damage and defeat it. The Samurai, at this point, is well equipped to deal with this boss fight and can make quick work of it if you have the right information.

You meet Lazarus 92 in the game twice, one after the other. Both times, he poses an intimidating figure and presence that could be overwhelming. In fact, he is the biggest boss you have faced in the game until this point.

Remember that this is a stationary beast. This means that he cannot unleash a range of attacks on you. Most of his moves are rather short-range. Though he has a couple of long-range moves, the best way to counter him is to stay on the outside and attack him with your long-range weapons.

The only way the beast can attack you from range is by vomiting a projectile of slugs. This is easy to counter by using a quick strafe or the quick dodge. This attack happens for a long duration. Once you effectively dodge it, hit the beast with a few shurikens or exploding arrows. This is effective because the beast cannot floor the Samurai’s movements with the vomit projectile.

The only other attacks the monster has is to swipe and swat at you. By getting up close and landing blows, you stun the beast momentarily. Using a multiple attack combo, you can ensure that Lazarus is reeling from the impact for a longer duration, giving you time to quickly pop out of range.

Once the monster turns red, jump back and wait for it to swing his bulky arms around. You could also use this period to hit him with exploding arrows or throwing knives. They can do heavy damage when landed multiple times.

Save Your Kiai Energy Attacks

Kiai Energy attacks are extremely valuable to your gameplay in these final stages of Samurai Jack Battle Through Time. The most important task is to decide when to use it. There are two consecutive times you will fight Lazarus 92. Saving your Kiai Energy means you have it in later stages to power your way to the battle with Aku.

If you choose to use your Kiai Energy in the first encounter, the second encounter becomes tedious. As we all understand, any second boss fight is bound to be harder than the first. This is why saving your best for later is a good idea.

When you successfully reduce Lazarus 92’s HP to its lowest point, the slugs that construe him dismantle and head for the sewers. You chase after them and head into the second battle, where Lazarus tries to put up a tougher fight.

With renewed attacks and more long range prowess, the monster tries it’s hardest. The best way to counter him is to play the safe game.

As soon as the second encounter begins, the beast launches a long range attack. By launching giant slugs into the air, they land around you and try to swarm you. Though they are numerous, they are slow.

The best easy to attack them is to launch your Kiai Energy fourth level moves armed with your upgraded iron sword or Reaper. You can use this to dispel the slugs but remember that they explode after the attacks. So swing and spring away from them.

The best way to defeat a giant blob of slugs is to swing hard. Get out your most upgraded best hand-held weapon and swing away. In case the monster overwhelms you, you always have the option to step back and launch throwing knives at it. But remember that you have collected the shock bomb that stuns opponents for 10 seconds. This weapon is one of your most powerful explosives and stuns the beast enough for you to land three 5 hit combos back-to-back.

Once you defeat Lazarus 92 for the second time, you will move on to the final adversary and your biggest foe – Aku. You turn and head on to face Evil Ashi and Demongo for the final time before reaching Aku’s chambers for the epic fight. You are so close to victory and hopefully giving the Samurai another chance of heading back to the present.