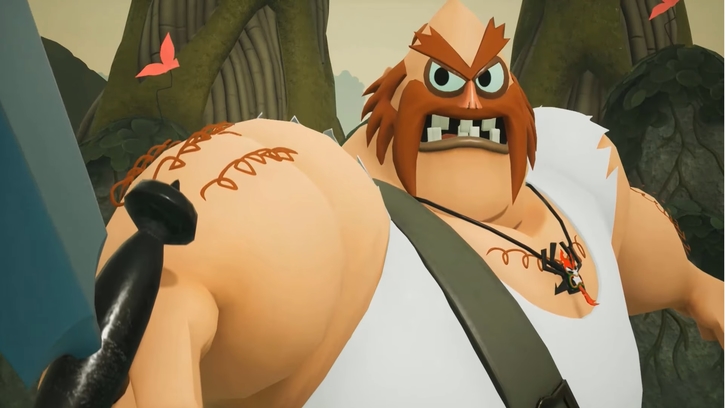 The Samurai Jack video game allows you to live the life of the legendary cartoon/anime character. Stuck in a time limbo, you battle your way through various opponents that the iconic villain Aku throws at you in a bid to kill him for the last time and get out of the time loop.

The first big test is the Scottish warrior who lives in the swamps. The character is a friend of Samurai Jack but is under Aku’s spell. You’ll have to defeat him and collect the Aku pendant and progress in the story line. You learn early on that he is controlled by the evil Aku through the pendant.

As you enter the misty swamp you will find a giant Kilt-clad Scotsman (presumably an old friend of Samurai Jack) waiting to ‘tear ya limb from limb.’ As the battle commences, you have to keep a few points in mind.

He is armed with a broad sword and unleashes four strike combos on you. Also, he has a hip gun that he can fire 360 degrees and cause damage. His tracks also include a leaping body slam and and a close range block breaker.

The best way to fight this boss is to get in close and stay in the range of his sword. This forces him not to use his gun or slams but only launch sword attacks at you. When you are in close range use your block for the first 2-3 strikes but use the quick dodge to move sideways and launch your own counter attacks. This is the best way to deal continuous damage to this tough fighter.

This advice is highly effective in dealing with his heavy damage attacks. But it allows him to use his sword slam, where he plunges his sword into the swamp and knocks you backwards (also breaks your block momentarily). But nullifying his gun and jumping slam is enough to keep the fight on the ground.

Use Kiai Power to Land Combos

Activate the Kiai Power you have gained to unleash a fast paced attack on the Scotsman. The ability slows down your opponent but speeds up your slashes with which you can deal heavy damage. This makes it very easy to defeat the Scotsman. After you deal some damage using this, block immediately as the Scotsman will launch another barrage of attacks after your Kiai Power subsides.

While staying stationary, the scotsman will continuously target you with heavy attacks, which will break your block. The only way around this is to dodge. These quick dodges backwards will relieve you from some of the pressure.

Try not to go towards the walls but stay near the center of the swamp. Also, once you move further away, he tends to shoot which is very accurate. But this can be dodged. Move right back in close range after he completes a wave of attack and unleash your own sword terror on him.

Try to Get Him on His Knees

Once you damage him and reduce his HP bar to it’s halfway point he falls to his knees and is incapable of attack for a short while. This is the best time to attack him. He is incapacitated and cannot attack you back for a 5-7 second duration.

You could use the Kiai Power during this period too, to deal heavier damage. But once he comes back to his senses, he starts breaking blocks and slamming you from above. Use the dodge button repeatedly to gain ground and avoid these attacks. Also, watch out for his heavy block breaking attacks during this period. The wounded Scotsman unleashes all his attacks on Samurai Jack.

But once you knock him down successfully twice, he loses consciousness and Aku pendant comes loose. After this, the Scotsman comes back to his senses and gives you a tight hug and is unaware of Aku’s spell on him. But this cut scene also gives you pointers on where the story will take you and the next boss fight too.

This is the first of nearly 20 boss fights n the game and is a short and relatively easy battle. Farm before and this fight and throughout the entire game to upgrade a whole host of weapons to make future fights easier. Consecutive encounters are exponentially harder and you can use all the help you can get in your bid to kill Aku.