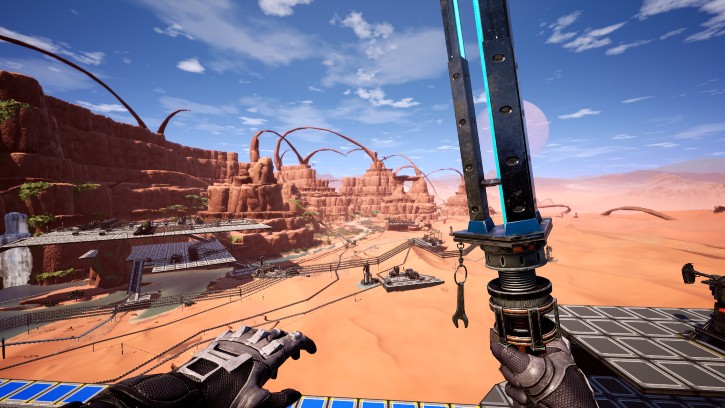 The fourth starting area in Satisfactory which is the Dune Desert. It is made to be Satisfactory’s hardest difficulty and is only for the most experienced pioneers. This guide will discuss all the challenges as well as the advantages involved when starting in the Dune Desert biome.

What is the Dune Desert Biome

The Dune Desert biome is a barren wasteland with an immensely uneven terrain to build on. There are no cliffs scattered across the Dune Desert biome but there is an extremely tall canyon you have to brave in order to get important resources such as Water and Crude Oil. This biome is also the largest among 20 other biomes in the game.

Hogs spawn frequently at some areas of the biome and there are also Spore Flowers near the river.

The Dune Desert biome is extremely rich on resources. You will be able to find 7 pure Iron Ore nodes in the middle and a few impure and normal nodes near them. Limestone will be hard to obtain because the pure nodes are at the edge of the biome which is not an ideal spot for a base.

You can make do with the normal and impure nodes for the early game. There are a few normal Copper Ore nodes at the center but you will have to go farther east to find the pure nodes. There are only two Caterium Ore nodes but the nearest one will be a pure node near the center of the biome.

The place is barren at the center for biomass and you will have to explore to the edges of the biome to look for leaves and trees.

There will be two pure Coal nodes near each other and this will most likely be your main source for Coal until you try to acquire the ones near the Northern Forest biome which should be relatively close if you have built your base below the canyons.

There are no Crude Oil nodes in the biome but the largest supply of Crude Oil in the map will just be over the canyon. There are two pure Sulfur nodes in the Dune Desert but they are both located at the edges of the biome. One to the northernmost part and the other to the southeast part of the biome.

Bauxite will be the farthest resource to obtain. It is around 2500-4000 meters away from you depending on where your base is located because of how vast the biome is. There is also no Raw Quartz available in the biome and the nearest one will be 1000-1500 meters away on top of a cliff.

There are no Geysers available in the biome. Uranium will also be as far as the Bauxite node and should be close to each other. There are only 5 Hard Drives available in the Dune Desert biome but all of them can be obtained as early as Tier 3.

How Difficult is the Dune Desert Biome?

With numerous kinds of resources unavailable, Dune Desert is the hardest in terms of acquiring resources. There are a few advantages of starting in the Dune Desert biome. It contains the most Iron Ore nodes in the game which should be extremely valuable for those who already know what to do.

The ideal location would be near the canyon so that you are closer to the Northern Forest biome and there is also a forest near the river to supply your Biomass Burners with Solid Biofuel until you find a way construct your Coal Generators. The leaves and trees in the small forest should last you until you reach the Coal Generators.

Underclocking can help reduce the consumption until you have the Coal Generators running. The Bauxite node can be made easier if you move the production of anything that uses Bauxite to a location near a Crude Oil node and a Water source.

There is a location near the middle of the world map just under the Northern Forest biome where all these resources are near each other.

The Dune Desert biome should be the most challenging area for a first time pioneer. It should not be that hard for experienced pioneers because of how rich the biome is with Iron Ore. Overall, the challenges should be welcoming because it forces new players to improvise, adapt and overcome through it.