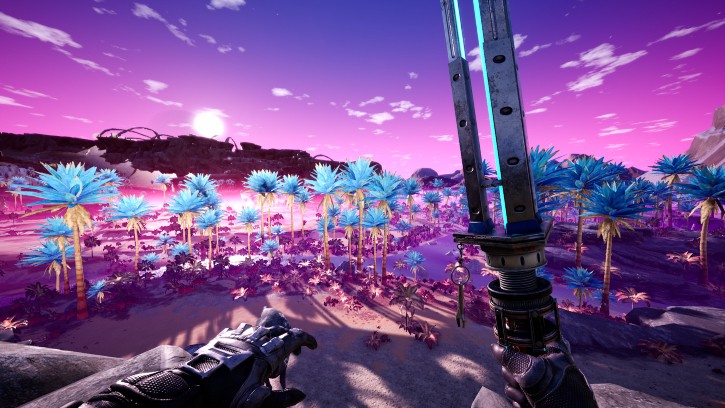 Satisfactory’s second starting area in the game. Perfect for new pioneers and a more relaxing playthrough for experienced pioneers. This guide will feature all the details involved in the Rocky Desert biome.

What is the Rocky Desert Biome

The Rocky Desert biome is almost the same as the Grass Fields biome in terms of terrain flatness. It is next to an ocean which makes water an easy commodity. It is a lush world with a decent amount of leaves and trees. The unique part in this biome is that when it fogs in this area, it will be hard to see anything because of the altitude.

There are a handful of pure node resources directly in the biome. There are 3 pure Iron Ore nodes, 1 pure Copper Ore node, 1 pure Caterium Ore node and 2 pure Bauxite nodes. The early resources are clumped up together and can be a great location to start a base with.

There are no pure Limestone nodes available and you will have to go a little north to get them. Limestone are important for foundations but you can make do with normal Limestone nodes as long as you take more nodes. The problem will start when you start needing Concrete to make efficient factories with alternative recipes involving Silica and Concrete.

There is no Raw Quartz available in the biome but there is a Pure and a normal Raw Quartz node to the north inside a cave. The cave also has a SAM Ore node if you choose to bring it to your base too.

The Rocky Desert biome is also close to all the pure resources near the Grass Fields biome. There is also a triple pure Coal node to the east of the biome. The most difficult resource to get will be the Sulfur nodes. They are approximately 2000-3000 meters away and the closest node will be the one located in the Northern Forest biome.

Crude Oil is easier to acquire compared to other starting locations. It is near the ocean and is easy to build on with foundations because of the vast space available. The only problem is that there are only 2 pure and 2 normal Crude Oil nodes. If you would need more, the next node will be at least 3,500 meters away.

The logistics in securing that next Crude Oil node will be arduous and is almost impossible to bring it back to your base. There are only two Geysers available but it will not be a big factor because of the various methods of generating power in the game.

One small thing to point out is that there are no available Paleberries that spawn near the center and on the top of the biome.

How Difficult is the Rocky Desert Biome?

The difficulty will be highly dependent on how well you could acquire the resources such as Sulfur and the next Crude Oil nodes when your factory starts lacking in Crude Oil. Because the Crude Oil nodes in the biome are near the ocean with a vast space available, the Rocky Desert biome should still be one of the easiest among the four starting areas.

The resources needed at the start are close to each other and contains more than a handful of pure resource nodes. Raw Quartz will increase the difficulty because the nearest one will be inside a cave with two entry points.

The first entry point is extremely hard to find because it is roughly around 800m away from the node itself and it also hidden in a way you cannot find it just by strolling around. There will be a tiny cave entrance near the north side of the beach and you will be greeted by 3 sets of Flying Crabs.

The second entry point is also hard to find since it is covered with vines and could be disguised as a forest. The cave will have at least 15 or more Tiny Stingers with a few Elite Stingers. Add the fog during the exploration of the cave and this will be one of the most challenging expedition you will have.

As a new pioneer, Rocky Desert is a great way to learn the game especially with how easy it is to set up a Refinery in this biome. You will also learn about the importance of foundations because of the small cliffs near the center of the biome.