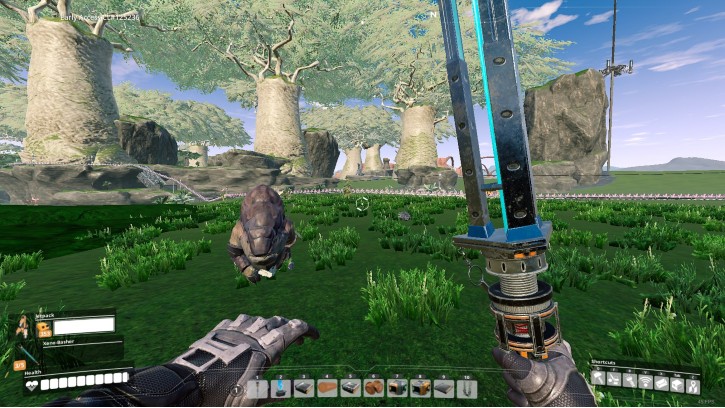 What is the Grass Fields Biome

The Grass Fields biome is the game’s supposedly easy mode starting area. It is a large open grassy area that is mostly plain which makes it easier to construct buildings without having the problem of inclines. It has a stone arches landmark shown in the image above which can be used as a beacon for navigation.

The Grass Fields biome has an abundance of resources. The problem is that most of them are impure nodes which give significantly less production rates. There are a few pure nodes at the edges of the biome. The southern part of the biome has a pure Caterium Ore node and two pure Coal nodes.

Towards the northeast, you will find multiple pure nodes. These are 2 more Caterium nodes, 2 Iron Ore nodes, 2 Copper Ore nodes and 4 Limestone Ore nodes. They are quite far from the starting location and are roughly around 1000-1600 meters away.

Crude Oil, Raw Quartz, Uranium and Bauxite will be all at least 1500-3000 meters away from the Grass Fields biome and will be the hardest ones to get if you decide to bring them near your base. There are about a dozen Hard Drive that you can get in the biome with at least 6 easily found in the middle.

How Difficult Is the Grass Fields Biome?

Grass Fields is indeed easy and recommended for new players. However, if you already have sufficient knowledge in the game, you will find that the other 3 starting areas are easier. The enemies found in this area will mostly be Hogs and can be dealt with the Xeno-Zapper until the end.

The Grass Fields biome is the farthest from the center out of all the other starting areas. For that, it will be hard to get more resources if you run out.

This can be negated by overclocking miners on impure and normal nodes. Constructing foundations for your production facilities is more simple because you would not have to worry about terrain clipping on your built foundations and conveyor belts.

The difficulty in getting resources such as Crude Oil and Raw Quartz makes the Grass Fields biome harder than other starter biomes. Crude Oil is essential and required in large quantities in order to progress.

Grass Fields is definitely the best way to start if you are not used to playing any crafting games. The logistics involved will be easier and you can focus more on grasping the details of the buildings and the progression instead of worrying about design and logistics.