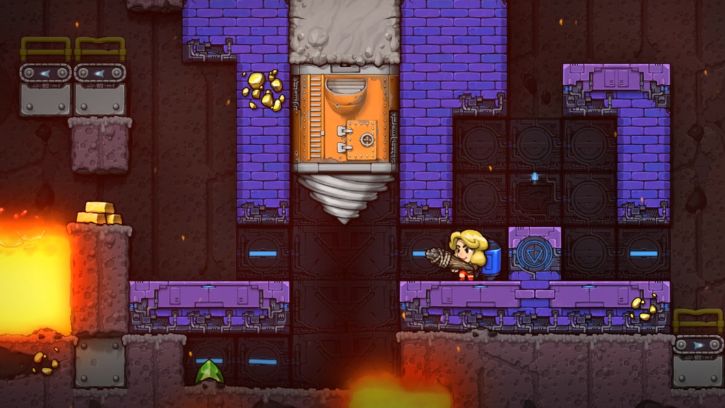 One of these secrets is a curious-looking drill situated in the world of Volcana, the lava-infested dungeon which houses steel platforms and quite the number of fire-spewing and fire-based enemies. What exactly does the drill do? Where does it lead to? And how exactly do you activate it?

In this guide, we take a look at the requirements on how to activate the drill in Spelunky 2 and uncover some of the mysteries that it will reveal once it is activated.

Quick Navigation show
What is the Drill?
How Do You Use the Drill?
What Does the Drill Reveal?
Conclusion

What is the Drill?

The drill is a mechanism that is used to bore through the ground of Volcana, its purpose seemingly unknown, the only way to find out is to go down its chain and descend in the hole that it has bored. The look of it does not appear so alien, it looks like a normal drill used for tunnel construction; what is curious about it is the tech surrounding it, seemingly otherworldly and more high-tech than the drill itself.

How Do You Use the Drill?

Before you even set foot to the world of Volcana, you must first make sure that you have the Udjat Eye equipped as an item to be able to activate the drill. The Udjat Eye, which can only be found in World 1-2, acts as the key to the whole drill machine. Without it, you will not be able to use the drill even if you try and force it out of its placement with bombs.

This means that in order to use the drill, you cannot use the first shortcut as it skips the whole of Dwelling, therefore missing your chance to collect the Udjat Eye, so there is a bit of a challenge in getting to access the drill.

If you have gone through Dwelling, claimed the Udjat Eye for yourself, and picked the tunnel to the right at the end of 1-4 to go to Volcana, then you are able to use the drill. To use the drill, simply step on the high-tech looking platform on either the right or left side of the drill with the Udjat Eye in your possession, press R1 (or RB), and watch it bore through the ground.

What Does the Drill Reveal?

Once the drill is activated, it will hastily make its way down to the bottom of the level. You can then descend the hole it has bored through with the chain that it leaves behind. Be cautious however as it will have most likely bored through several lava pits in its wake. These lava pits will then start to spill lava into the hole and when descending, may fall on you and kill you instantly.

A tip is to wait out the lava until it has done dripping down before proceeding down the chain. Another tip is to redirect the lava elsewhere by throwing bombs at it to create different pits for the lava to flow into. Once you see that the lava has settled into their spots and none are falling into the hole where the drill has gone through, proceed to climb down the chain until you reach the bottom.

Once at the bottom of the stage, there will be two exits leading out of the stage: one is the normal exit which looks like the typical exit/entrance caves of Volcana that proceeds to the next world and the other is a tunnel that is surrounded by red bricks, looking like an entrance to a castle. This exit leads to a completely optional world called Vlad’s Castle that houses an important item (the Crown) as well as a mini-boss by the name of Vlad the Vampire.

What is unique about the entrance to Vlad’s Castle is that upon completing the optional quest in the area (collecting the crown), you can backtrack down to the entrance of the castle and find your way back to Volcana, where you can now proceed to the normal exit and into the next world. It is quite a dangerous area to explore, so make sure you are stocked up with hearts as well as a general knowledge of the area so that you are not blindsided by Vlad the Vampire’s attacks or find yourself falling to your death in the perilous stage.

The world of Spelunky 2 might seem claustrophobic at first, but secrets such as this are what make the game endlessly explorable and rather large. The drill is but a drop in the water of the otherwise vast world of Spelunky 2 and just proves that exploration nets you a ton of loot that will help you down the line as well as rather unique encounters that you may have missed if you were only rushing through the levels and making it to the end of the game as soon as possible.