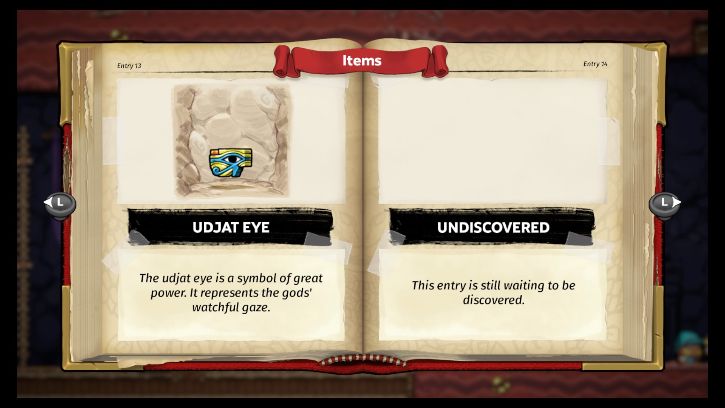 Spelunky 2’s caves and dungeons hide many secrets and treasures just waiting to be found. Some of these treasures can be found out in the open, some in the shops, and some behind locked doors. This particular treasure we will be looking at can only be found once in the whole game, locked inside a chest inside a particular cave.

I am, of course, talking about the Udjat Eye, a rather regal-looking artifact that offers quite a lot to the player. In this guide, we will be finding out how to get the Udjat Eye in Spelunky 2, a curious treasure that does the same as another piece of equipment but holds a lot more power than it leads you to believe.

What is the Udjat Eye?

The Udjat Eye is a treasure that looks Egyptian in nature as some of the treasures and creatures found in Spelunky 2. As the name suggests, it reveals otherwise hidden items on the map. In this case, these hidden items are gems hidden within the grounds of the world. In turn, it acts just like the Spectacles equipment that you can find in the shops or through special means like the Altars of Kali.

However, you will notice that upon collecting the Udjat Eye, it will be displayed beside the timer instead of below your health bar like most equipment. So, what’s so special about this item that it deserves its own equipment slot when its effects are the same as a common item which can be bought in the several shops you find throughout your journey? We will talk about it later in the guide as first, we look at how to claim it as yours.

How Do You Get the Udjat Eye?

The Udjat Eye can only be claimed in world 1-2. You will notice that there is a cave in world 1-2 with an Egyptian-looking chest in it atop a pile of skeletons. To unlock this chest, you will need to find the golden key, also somewhere within 1-2. It can sometimes be out in the open or much more hidden in a strange place. In the video above, the key was found beneath a ton of ground that needed to be dealt with quite a number of bombs.

Take note that the golden key is an item that needs to be carried around, so be warned that you can lose it or if you’re carrying a pet or a weapon, you need to put those down first in order to carry it. However, this also means that you can use it as a ranged weapon by throwing it, so use it to your advantage when backtracking to the cave, or when powering forward if the cave has not been found.

Once you have entered the cave with the key, simply walk up to the chest and the key will disappear, opening the chest and revealing to you the Udjat Eye. Now you are empowered by it, being able to see all the hidden gems buried beneath the stages of Spelunky 2.

The Special Use of the Udjat Eye

Aside from the Udjat Eye revealing hidden gems within the ground, it has another use: it also gains you access to the drill in World 2 Volcana. If you have traveled to Volcana, you may have noticed a rather large drill before. The only way to use this drill is to have collected the Udjat Eye as it acts as the key to the drill.

Be warned however that activating the drill gets rid of the Udjat Eye, therefore if you do not have the Spectacles equipment in your inventory, you will not be able to see the hidden gems within the grounds anymore.

Getting the Udjat Eye is always a worthy investment as it’s essentially a free pair of Spectacles to help you farm for more money if needed. It also unlocks a lot more secrets hidden within Spelunky 2’s dungeons as certain areas are only accessible by the drill in World 2 Volcana. That said, if you are not up to giving the Udjat Eye to the drill mechanism, you can always keep it around for the free gem-revealing properties it brings.