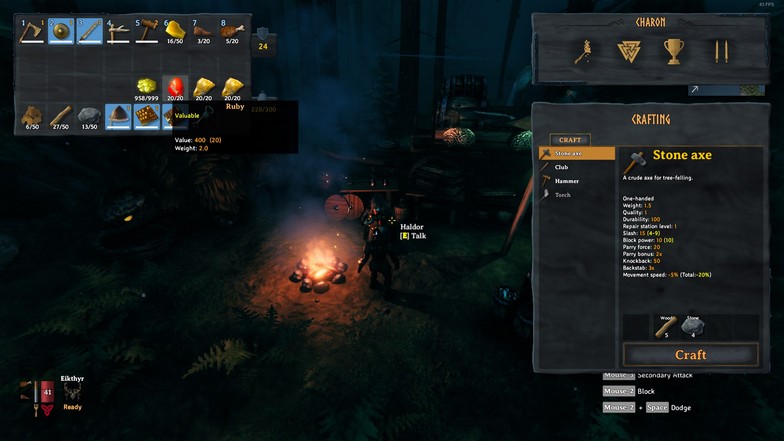 When you find items that are tagged with “Valuable”, you might have the idea of selling these items and there is definitely a trader available to barter with in Valheim. The main currency used are coins and these gems are only meant to be sold to the trader to get more coins. This guide will show you how to find the trader in Valheim and the items available for trade.

Quick Navigation show
Exploring Other Islands – Trader Location
What Does the Trader Sell?
How to Sell Your Items
Conclusion

Playing on 3 different servers or seeds, the trader has never spawned on the main island. You have to build a raft or a Karve to explore the surrounding islands near you. Once you explore different islands, even before you discover some parts of the islands, the trader icon will show up on the map.

They are usually found in the Black Forest biome on islands that have endless waves of Greydwarves roaming. You can clear the Greydwarf Spawners for Ancient Seeds to fight the Elder. On the bright side, the trader’s location is guarded with runes that suppress enemies from attacking inside the zone.

It is a good idea to build a base on this island and make sure to build it away from the Black Forest biome. Just make a portal in this base so you can easily sell and buy items.

What Does the Trader Sell?

The items sold by the trader are all optional but give a great boost to exploring dungeons, combat, or a new food source. If you are having trouble finding the third piece of meat as a buff, you can fish for raw fishes so you can have the raw meat, neck tail, and raw fish combo for maximum health with easily farmable resources.

Dverger Circlet is used as a light source for going inside delves and dungeons for Surtling Cores. Megingjord is a huge damage buff for combat but its biggest feature is adding another 150 weight to your inventory. This makes the Megingjord the priority if you have 950 coins available to spare.

Ymir Flesh is used for crafting stronger weapons such as the Frostner. They are needed in high amounts but are not required for quality upgrades on weapons that need them. It will be available once you farm enough resources in the mountain biome (silver ores). Other than that, Megingjord will be much more helpful in the start and towards the end.

How to Sell Your Items

When talking to Haldor, the trader, you just need to press the lower right button to sell whatever items you have that are marketable. Any item that is tagged as “Valuable” is just used to barter with traders for more coins. Items such as ruby, amber, and pearls are sold to the trader for coins and you can find these inside chests of random overworld outposts or dungeons.

Just spam the sell button because you do not have the option to choose but basically, all these valuable items are meant to be sold anyway.

These items are all supplementary and will update these consistently if new information shows up about the other items. The biggest boosts you can get are having the ability to farm raw fish and increasing your carrying capacity by 150 weight from the Megingjord. The overall stamina, max health, and health regeneration bonus are the next step to help you improve your combat in progression.