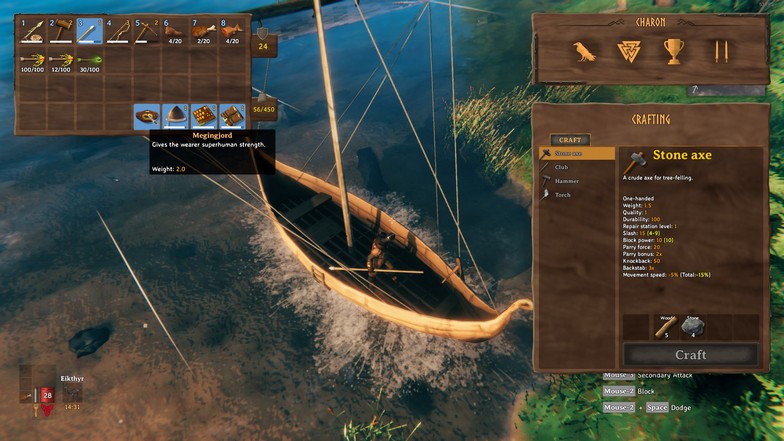 Having only 300 weight to work with puts so much limitation on your efficiency and progression. You need so many things that you want to have a good stock of them in your base. One of the best quality-of-life changes would be increasing your capacity and there is a way to do it. This guide will show you how to increase carrying capacity in Valheim.

The trader will be the one that sells the item to increase your carrying capacity. Not only that but also, give you a slight damage boost to all your attacks. To find the trader, you need to explore islands around the world. You do not have to explore every inch of an island.

During my playthrough, the trader showed up in one of the nearby islands from the starting island. Just through sailing, the trader icon showed up on the map even before arriving on the island. You can learn more about this in a separate guide here.

Buying and Getting the Megingjord

After finding the trader, you will need 950 coins to purchase the item called Megingjord. You can equip the Megingjord to give you superhuman strength. This increases your carrying capacity by 150 weight which gives you 450 weight in total.

So not only does it give you carrying capacity, it only boosts all your attacks. The Megingjord is the most expensive item from the trader and 950 coins might take you at least 6 runs of dungeon runs or 3 crypt runs. You can also find coins from killing trolls which is a bit hard even with great gear.

With 20 wood and 10 bronze nails, you can craft the cart to bring on your farming runs. You have to manually carry the cart though and it is actually good for farming copper, tin, and silver ores specifically. As long as these resources are located near your main base and cannot be transported through portals, carts will be the best way to make your farming efficient.

Other than those 3 ores specified, you are better off using portals to transport anything that allows teleportation. For other ores in other islands, you can use the Karve or the longship for transporting ores. The Megingjord can only support an additional 150 weight so you will need to go back and forth to your ship in order to transport more ores to your main base from a different island.

This is one of the first things you should buy from the trader and you can also buy the fishing rod as it is cheaper and useful for gaining another good food source by fishing. Carrying ores will be a lot easier with the Megingjord and you can transport it faster.