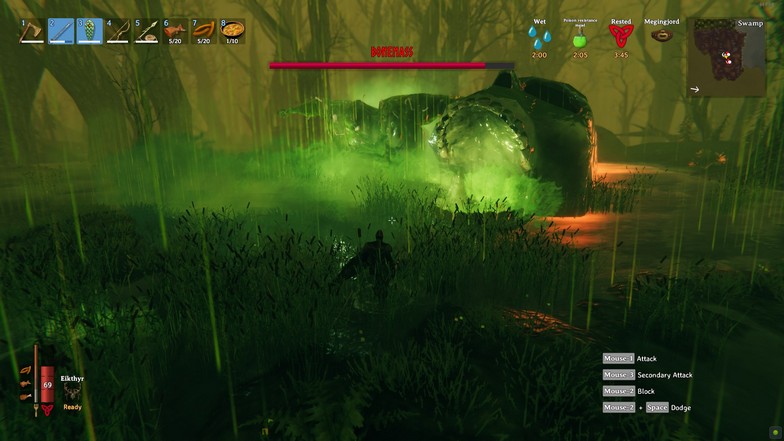 The Bonemass boss is the third boss in Valheim. It is one of the hardest bosses to fight but it is easier to solve the hidden clues to summon it. It will take hours of preparation to get the tools and resources needed and also to set up an emergency outpost nearby. This guide will show you how to summon and beat Bonemass in Valheim.

To find the location of the Bonemass boss, you will have to find a runestone that registers its exact location. These are found in crypts where you can use the swamp key that dropped from the Elder boss fight.

Finding crypts to use the swamp key

So, how do you find crypts? There are multiple crypts that can be found in the swamp biome. There are usually more than 8 crypts in a single swamp biome and they are easy to find through sailing. Once you sail the ocean and find nearby shores, you can distinguish the trees from afar and wait until you see old spiky trees on the island.

You can also go near the shore and just watch the minimap until the current location turns into the swamp biome. Be careful though. If you land on a dangerous area of the swamp filled with leeches, wraiths, blobs, and Draugrs, you might get overwhelmed and die while losing your ship.

The best strategy is to build a base on the next biome that is near the swamp. These are usually meadows and these are the safest ones to start camp. Find any fort-looking structures with a green torch lit and these will definitely be the entrance to a crypt.

Take note of these tips before entering the crypt.

Once you finish farming crypts, you will receive an item called “Withered Bones” and you will use these bones to summon Bonemass. You will need at least 10 withered bones to summon the boss and the runestones found inside the crypt will register the Bonemass’ exact location. Crypts do not have a 100% chance to spawn this runestone so you will have to keep grinding.

Preparing for the Bonemass Boss Fight

The Bonemass boss will be close to impossible if you do not have at least 2-3 poison resistance meads with you. These are crucial so always have them in stock at this level of the game. The fight can take at least 5-15 minutes depending on your current gear, skill, and the number of players on the server.

Using blunt weapons are also mandatory because any other weapon you have will only tickle the boss in this fight. Iron maces will be the best choice and make sure to level up your club skills if you have not used this type of weapon yet. Activate the Eikthyr buff if you do not have it as your active power.

Use the tips mentioned above as well and treat it like you are entering the crypt but on a bigger scale.

How to Beat the Bonemass Boss

The Bonemass cycles through 3 attacks. The first one is basically just a melee swipe that targets one player. For the best strategy, you will need 1 player to tank this boss and stay glued to the Bonemass boss. This will force the boss to use this melee swipe as often as possible.

The only time the tank will move out of the way is when the boss uses his poison attack. Bonemass will coat the surrounding area with poison which can be dodged by two dodge rolls or just running back immediately. The animation for this attack is easy to spot as Bonemass will just stop and hold his ground without moving its hands.

The more you dodge poison debuffs, the longer you will survive and stay on the offensive. Bonemass’ third attack is basically just a summon ability where he spawns skeletons and blobs to attack you. This is the most irritating one as you are always struggling to get stamina and now you need to hit these enemies as well.

The best strategy with a team is to have one person hold the aggro on the boss and keep the other players free from danger. The two other players will either damage the boss with blunt weapons as hard as they can or clear the spawned mobs and natural mobs around the area.

It highly depends on the situation and sometimes, you can literally just melt the boss with high-quality iron maces on multiple players. Poison resistance mead on everyone to tank the poison damage and have every split around the boss while attacking relentlessly with high stamina buffs. Having the Eikthyr buff will be a blessing for this fight and make sure to activate it before fighting Bonemass.

The Bonemass will drop the Wishbone and its trophy to be sacrificed at the sacrificial altar. The Wishbone will be used in the mountains to find the next tier of structures, items, weapons, and armor for progression.

The Bonemass buff will give you the third active power ability and increase your resistances to physical damage for 5 minutes with a 20-minute cooldown.

This boss is one of the hardest in the game just because of how chaotic the fight can be. You can get the wet debuff from just kiting around and stepping on the water where there could also be unseen leeches that can hit you. There could be Draugrs spawning and the ranged ones might destroy anyone that gets unlucky.

You also have blobs refreshing poison debuffs and even skeletons with bows just to add more trouble. This fight takes a lot of preparation so make sure that you are ready and not let your valuable resources get wasted. If things get out of hand, your party can just use the corpse run buff and cheese the boss all the way.