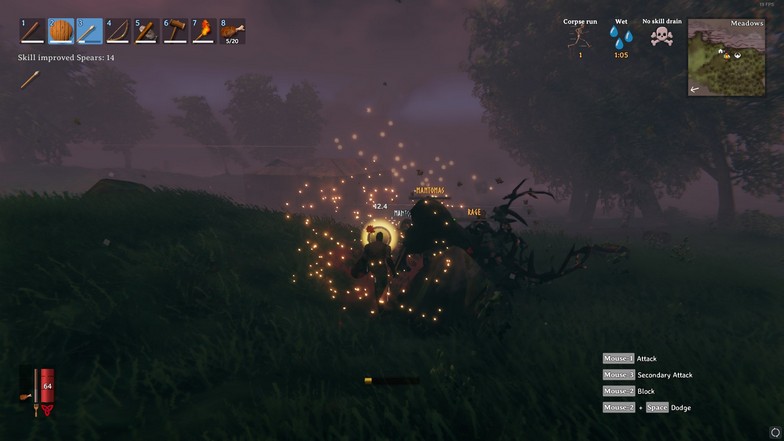 Eikthyr is the first altar boss you will encounter in Valheim. It might be confusing for some players on how to summon Eikthyr especially if you are not reading the runestones properly. This guide teaches you how to summon and beat Eikthyr in Valheim and gain its active skill power throughout the game.

The location for his altar is already marked on the map and you will definitely encounter this altar while progressing and gathering materials. The problem is solving the clue. If you interact with the altar, you will see that you need to offer some items.

If you read and understand the markings, it says that you need to slay this kin which is pertaining to the deer statue on top of the runestone. This means that you will need to farm and grind deer around the area. The best way to hunt them will be by using a crude bow since using stealth is incredibly slow and risky.

The best strategy would be getting a shield and another one-hand weapon. This is the laziest way to beat it and you might not even need to craft some armor with the shield equipped. In case of trouble, you should get all the buffs you can get such as “rested” from sleeping, blueberries, raspberries, and raw meat.

Even if you get hit, your health will regenerate like crazy and this will be a simple fight even if you are alone. If you do decide to do it alone, make sure you have a secondary weapon as your weapon might break from fighting him.

You can also craft a small base with a bed near Eikthyr’s altar so you can just go back easily to the fight. This works extremely well if you are playing with other players. You can also level up your weapon skills extremely fast using this method that is discussed more in-depth here.

Eikthyr has basically two moves. His ranged lightning strike with a massive radius and cute little headbutts when you are near. Both are easily blocked by a shield negating all damage at the cost of stamina. The only thing you need to lockout for is that sometimes, Eikthyr does his lightning strike and then headbutts you immediately.

This occasionally happens and if you start seeing Eikthyr running around, that is your cue that it is safe to hit him. Keep blocking Eikthyr’s attacks with a shield and play it safe by attacking him while running. Rinse and repeat and the fight will be over in a minute.

If you choose to fight Eikthyr with no shield, it is possible but the lightning strikes will be too hard to dodge and you need to have masterful dodging on his headbutts as well. Bringing a bow to the fight is suicide so do not even think about it especially when you are alone.

You will receive hard antlers to make antler pickaxes that can mine huge rocks and boulders scattered across the island. You will also get his trophy as a reward which you will attach to the sacrificial altar (your spawn point).

After attaching the trophy, you can interact with it and you will obtain a permanent active skill bonus which decreases your running and jumping stamina usage by 60% for 5 minutes. The skill has a 20-minute cooldown but it is insanely good for fights.

Learning how to summon Eikthyr is a tricky puzzle but the fight itself is almost a joke since he basically only has two moves. The antler pickaxe and the Eikthyr buff will be crucial to your progression and makes life easier throughout your playthrough. You can farm as many stones as you can and kite enemies better with the active skill bonus by pressing “F”. If you have the right tools to fight Eikthyr, you should do so immediately to get reap the rewards as soon as possible.