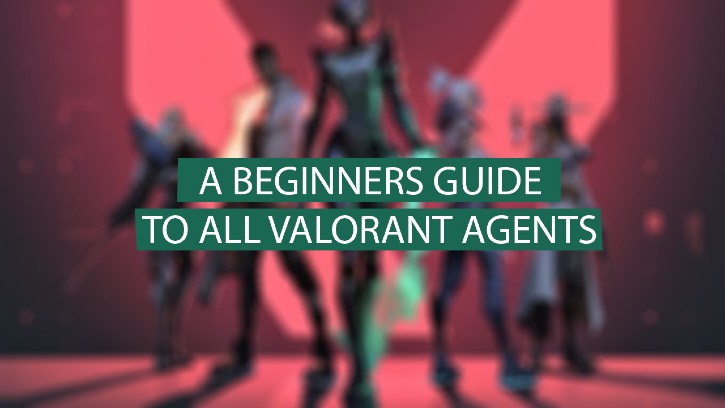 If you’re looking for a beginner’s guide to understanding all Valorant agents, you’ve come to the right place.

To perform to the best of your ability in the game of of Valorant, you need to know the agent that will best suit your own game style and your team’s tactics. Each agent has their own role and it’s crucial to choose one that will fit in your team’s composition. Learning the roles and abilities of each agent will help you improve your decision making and claim victory.

Players have different roles to help their team succeed in this goal. Whether it’s to defend a site or plant a Spike, each Valorant agent plays a key part within the game.

This is the complete beginners guide to Valorant agents that you will need before queuing up for your next game.

What Are Valorant Agents?

What are Valorant agents? The characters in Valorant are called “agents”. New players only have access to five agents; Brimstone, Jett, Phoenix, Sage, and Sova.

The other agents are Breach, Cypher, Omen, Raze, Reyna, and Viper who are initially locked in the game. However, there are several ways to unlock these agents which will also be discussed in the section below.

Players get a sneak peek of each agent’s background and culture through in-game overview and voice lines.

Valorant agents each have four abilities. The fourth ability is known as the agent’s most powerful and effective skill – or it’s Ultimate.

How Do Valorant Abilities Work?

It’s important to learn how Valorant abilities work. Each Valorant agent has four abilities that can be earned in different ways.

One signature ability is always free every round. Players can buy the other two abilities during the buying phase before the beginning of each round.

Ult points are granted through capturing Ult orbs located on the map, dying in a round, planting the Spike, defusing the Spike, and killing an opponent.

Unused abilities are still available in the next round. However, guns, shields, abilities, and ult points are gone after switching roles at half time. Make sure that you use your ultimate ability before it’s gone or else you’ll lose all the Ult points you worked hard for.

Learning the right timing to use your abilities will take patience, time, and a lot of practice. For now, it’s okay to miss some shots as long as you keep the lessons along the way.

How to Unlock Valorant Agents

There are different ways of how to unlock Valorant agents. New players receive ten rewards for ranking up to Tier 10. You can level up by completing missions such as purchasing shields in-game and using your abilities.

Tier 5 and Tier 10 give free agents to unlock. If you have completed the ten tiers, you can activate contracts to earn experience points towards the next free agent. However, this will take a longer grinding than the previous two agents.

With that said, you should choose your first two agents wisely. The game automatically prompts you to recruit a new agent if you are eligible for one.

If you don’t have the time to invest in earning the rest of the agents, you can purchase each agent for 1000 Valorant points, which is equivalent to $12.

Who Are the Valorant Agents?

These agents specialized in a specific role within the game such as Support, Lurker, Entry Fragger, Leader, and Crowd Control.

Breach is a powerful initiator who takes advantage of walls, ground, and terrains. His abilities are mostly used for crowd control. He stuns, blinds, and knocks up enemies which are effective in securing sites and dazing enemies.

His ultimate ability casts a huge wave of earthquakes that disorients and knocks up enemies, leaving them vulnerable for your team to kill. Breach was well-received during the alpha testing because he has one of the best ultimate abilities in the game.

If you are an aggressive player who can quickly learn the map like the back of your hand, Breach is your guy.

Read More > How to Use Breach – Valorant Agent Guide

Brimstone can control the map from a safe distance through his abilities. He can cast a smoke cloud within a large area from his location, even if he can’t see it.

This will set up his team for a push or prevent the enemy team from pushing blindly into the site. He can also buff his allies with rapid firepower. His ultimate launches a massive airstrike that can kill enemies within a few seconds.

Players who like planning calculated assaults can be the next Brimstone main.

Read More > How To Use Brimstone – Valorant Agent Guide

Cypher acts as the in-game leader because of his ability to gather crucial information. He can see the enemies every movement with his spy cams and trap wires.

Cypher uses his ultimate to extract the location of the remaining enemies from the dead body of an opponent. It’s not enough to learn all this information alone, you’ll need to communicate them with your team.

Do you like calling the shots? Cypher is the right agent for you.

Read More > How To Use Cypher – Valorant Agent Guide

Jett is a duelist and entry fragger. The entry fragger’s role is to lead the team in going in and taking that first blood. They also tend to die first, but the information they bring to the table becomes valuable for their teammates.

Jett is one of the best entry fraggers because she has high mobility that can keep her alive after that first kill. She can dash forward or jump high which makes her an elusive target. She can also block an enemy vision with a smoke bomb.

Her ultimate ability allows her to wield several knives that can kill enemies on a headshot. Jett will best suit players who like the elusive fighting style.

Read More > How To Use Jett – Valorant Agent Guide

Omen is a sneaky agent who can kill enemies from behind. His abilities let him teleport from short distances to long distances.

He is a lurker looking for enemies to trick and confuse. He can place smoke grenades and enemies who are caught within will have limited vision.

His ultimate ability lets him teleport from any point within the map. Playing behind enemy lines gives him the advantage to sneak in a few kills before disappearing.

If you like a high risk and high reward gameplay, this is the right agent for you.

Read More > How to Use Omen – Valorant Agent Guide

Phoenix is a duelist that highly rewards players with aggressive playstyle. He can blind the enemy from a long distance with his ability and take them out from that round.

He can also block vision with a wall of fire that damages allies and enemies who pass through it. He has the ability to heal himself from a fireball while damaging enemies.

His most remarkable ability is his ultimate. When activated, he returns back to his desired position after getting killed.

Read More > How To Use Phoenix – Valorant Agent Guide

Raze is also a duelist who loves explosives. Most of her abilities revolve around explosions. She can deal with a significant amount of damage from her cluster grenades and robot.

Her ultimate ability is a showstopper. She fires a rocket launcher that can kill enemies in an instant. With her killing potential, there’s only one way to play Raze. Be aggressive.

If aggression is your middle name, Raze will best suit you.

Read More > How to Use Raze – Valorant Agent Guide

Reyna has a high potential in taking a 1v5 in her favor.

She thrives from the death of her enemies as she absorbs soul orbs from those she has killed. She can then use the orbs to heal herself or be intangible. Her ultimate abilities transform her into a powerful agent with increased firepower and reload speed.

If you can confidently take 1v1 fights, choose Reyna.

Read More > How to Use Reyna – Valorant Agent Guide

Sage is one of the most picked agents in the game. With her healing abilities, she is a key role in the team’s success.

Her ultimate is reviving an ally which is deemed to be the most effective ultimate ability within the game. She can also block path and vision with her ice wall combined with an ice path that can slow enemies.

If you don’t like being in the front lines, Sage is the best agent for you.

Read More > How To Use Sage – Valorant Agent Guide

Sova is an initiator that can set up fights for your team. His abilities can gather significant information that will help you in taking the next steps.

Sova is all about scouting enemies and communicating their location to his teammates. His abilities also include an arrow that deals with a damaging pulse and an owl drone to gather intel.

His ultimate skill has the best use in chokepoints to land a free kill.

Read More > How to Use Sova – Valorant Agent Guide

Viper is all about toxins. She is a controller who can easily plant a bomb or defend a site alone with her abilities. Her abilities cost fuel that automatically recharges when not in use.

She can block the vision of enemies with toxic screen and deal damage with a pool of acid.

Enemies who came in contact with her ultimate will have a limited vision and will suffer from degenerate. Viper has a huge advantage if you take a fight within her pit.

Read More > How to Use Viper – Valorant Agent Guide

Valorant agents offer different roles and play styles. There is a unique pool of agents to choose from.

Getting yourself familiarized with each agent will not only improve your skills but will also make the game more fun for you.